Why are we here? Kate Lunau on the mysterious particles that could help explain 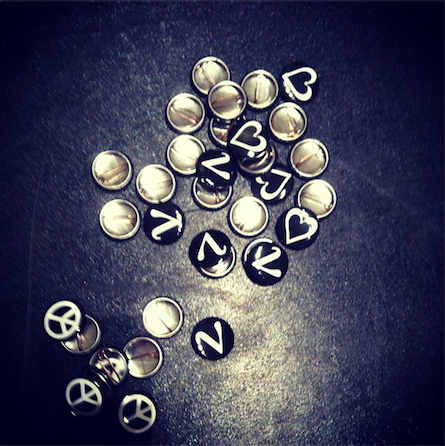 Scientists distributed out buttons featuring the neutrino sign, the peace sign and hearts for the "Neutrinos for Peace" effort, which is against nuclear proliferation. (Photo by Kate Lunau)

Did you know that about 100 billion neutrinos pass through your thumb every second? Catching a single one is like trying to grab at a ghost.

We heard about this today at an AAAS Meeting talk on these mysterious little particles. Neutrinos are one of the fundamental building blocks of the universe, like a photon (light particle), an electron, or the recently discovered Higgs boson; they come from the sun, from exploding stars (supernovae) and from cosmic ray collisions. Neutrinos, which carry no electric charge, hardly interact with ordinary matter and slip right through the Earth; you’d need a wall of lead “as thick as the solar system” to stop one from the sun, said André de Gouvêa in his introduction. But perhaps most importantly, they could tell us about why we’re here.

To understand our existence, we have to look at supernovae, said Mark Vagins of the Kavli Institute for the Physics and Mathematics of the Universe, sporting a colourful Hawaiian shirt. Every atom in our bodies “came from the heart of a dead star,” he said. “They are responsible for our lives.” Supernovae radiate almost all their energy as neutrinos. They’re the “messengers,” giving a view into the heart of a dying star and telling us about the cosmos. But detecting them isn’t easy. It’s been over a quarter of a century since Supernova 1987A, the best-studied supernova of all time, was discovered; even then, scientists only managed to capture about 25 neutrinos at three separate observatories around the world, Vagins noted. “We want more supernova neutrinos.”

Vagins works at Super-Kamiokande (often called “Super-K”), a massive underground detector in Japan that contains 50,000 tons of ultrapure water. He and theorist John Beacom suggested that, by adding 100 tons of gadolinium to water in the detector, it could be made more sensitive—an idea called GADZOOKS! for Gadolinium Antineutrino Detector Zealously Outperforming Old Kamiokande, Super! (Yes, Vagins said, that exclamation mark is part of its official name.) To demonstrate the idea, they’ve built a “baby-K” reactor called EGADS (Evaluating Gadolinium’s Action on Detector Systems) and he hopes to have conclusive results within a year. “By 2015, we expect to be ready to detect supernova neutrinos with EGADS from anywhere in our galaxy,” he said. The plan is to get gadolinium into Super-K.

Then, Vagins hopes, he and other scientists will have their hands full with supernova neutrinos.