Coming up today at the Johnson Space Center: Why does the heart shrink in space?

Kate Lunau gets ready to hang out with Chris Hadfield 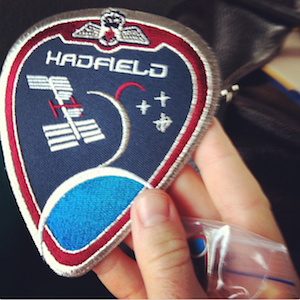 A few weeks ago, the Canadian Space Agency offered me the chance to visit NASA’s Johnson Space Center and shadow astronaut Chris Hadfield, who will be the first Canadian to assume command of the International Space Station. So yesterday morning I hopped on a plane to Houston.

After a few hours’ flight, I landed in hot, muggy Houston. As I skimmed around downtown, passing strip malls and palm trees, I knew I was headed in the right direction when I started seeing car dealerships with names like “Space City.” My hotel, just down the road from JSC, decorates its walls with framed photos of galaxies and star clusters.

The JSC, which is home to NASA’s astronaut corps, is the lead NASA center for the 16-nation ISS. By contributing robotics like the Canadarm2 to the Space Station, Canada earns a place for its astronauts to train here. Hadfield, a highly regarded member of the space community, is  also very musical guy: last time we met, he told me about how he liked to play his guitar in space. I was happy to see he plans to do so again on this mission.

Today and tomorrow I’ll be shadowing Hadfield and Canadian astronaut Jeremy Hansen. Coming up today: We visit the Neutral Buoyancy Lab and the Human Research Facility, where scientists are studying why the heart muscle seems to shrink in long-duration spaceflight. Tomorrow I’ll be seeing the Virtual Reality lab.