Elise Andrew on why she loves science 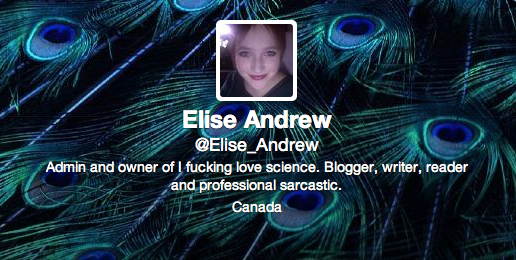 Last week, science fans expressed shock at the news that the wildly popular “I F–king Love Science” Facebook page, which has over 4.3 million “likes”, is run not by a man, but a woman: Elise Andrew, a 23-year-old Brit who lives in Midland, Ont., to be precise. After Andrew posted a link to the page to promote her new Twitter profile, which included a photo of her, reader responses ranged from “F*ck me! This is a babe ?!!” to “holy hell, youre a HOTTIE!” Some had assumed IFLS was run by celebrity astrophysicist Neil deGrasse Tyson. Taken aback by the reaction, Andrews tweeted: “Is this really 2013?”

Andrew works for LabX Media Group as social media content manager. A self-taught social media mogul, she launched IFSL in March 2012, and runs the site in her free time.

Q: Tell me about how you launched IFLS. What was the idea behind it?

A: I started IFLS while I was in my last year of university [studying biology at the University of Sheffield]. I was three months away from graduation, so I really should have been focusing on other things, but I got addicted to this very quickly. I promoted it to my friends, and it just gained traction so quickly and it didn’t stop. We got thousands of subscribers in the first day. I keep expecting it to level off at some point, and it doesn’t. [When the page reached 100,000 “likes”], it scared me a little bit. At that point I was still in university, and 100,000 people just seemed a bit insane.

Q: Why do you think it took off so quickly?

A: I don’t know what it was, exactly. The name makes it difficult to scroll past; it’s not something you can ignore. Whether you like it or not, it’s the sort of thing that hits you in the face, and you’ve got to look at it. And I try to make the content very engaging. I studied biology, and my interests are hugely widespread. To be honest, what I struggled with in my degree is what’s so helpful when it comes to social media, in that I lack focus. I’ll start reading about evolutionary biology and end up on quantum physics. While that makes writing your dissertation very difficult, for a page like IFLS that’s amazing because I get a wide range of everything.

Q: Do you generate all the content on the site by yourself?

A: Yes. I’m very lucky because people send me a lot of stuff, and post cool articles and pictures on my wall, which does make life a lot easier for me. When we were at 60,000 or 100,000 “likes,” I was still having to source the content myself, and I was constantly trolling the Internet, whereas now things are sent to me which does make it a lot easier.

Q: How’s your relationship with readers?

A: I like to think the relationship is really good, and very interactive. It’s not just that the number [of “likes”] is so high; our engagement is always amazing. Facebook gives you two numbers: the number of people who click “like,” and the number who are “talking about this,” which is people who’ve interacted with the site, by commenting or sharing something. If you look at any massive page, that has five or 10 milion “likes,” the number “talking about this” will be in the hundreds of thousands. Ours is in the millions—we usually have more people talking about it than the number who’ve liked it. Even with the big names out there, like Kit Kat and Pepsi and Rihanna, in terms of engagement and the number of people interacting with the page, we regularly hit the top spot in all of Facebook.

Q: Why do you think that your gender came as such a surprise to your readers?

A: I mean, it’s never been a secret. My name’s in the “About” section. I met Richard Dawkins in November and posted a photo of us together. [With the number of “likes” growing] something like 200,000 people a week, I guess there’s a lot of new faces who haven’t heard my name before. [After joining Twitter], I wanted to follow more science people so they’d tweet me things. I thought, “I know what will help me—I’ll put it on [Facebook] and readers can tell me about some cool people to follow.” And then I just walked away, and didn’t check the page for two hours. And I came back to a complete s–t storm of people going insane.

Q: Why were people so surprised, do you think, to see a woman running a science page?

A: There is a bias that is sadly still routed in fact—there are more male scientists than females. So it doesn’t really bother me that there was surprise, but the level of surprise shows we still have a really long way to go in society. There aren’t that many female role models in science. There are a couple of women, but mostly you’ve got Neil deGrasse Tyson, Richard Dawkins, Lawrence Krauss—they’re all guys. Bill Nye the Science Guy. I love that guy, but it’s all guys. When we think of scientists, we hear a man’s voice.

Q: What’s the role of a blog like yours in changing that?

A: I’m still thinking about that one, because I don’t want it to be about me. I don’t want it to be “Elise Andrew presents…” I want it to be “I F–king Love Science.” I’m not somebody that really likes to put myself out there. Googling my name and finding pictures of myself is scaring me. On the same level, I’m realizing I’m in a position to really change things. Maybe I have the opportunity to be a female voice.

Q: What’s the plan going ahead?

A: I’ve been approached by a lot of publishers about a book. I love to write, so it’s just timing. I don’t get much sleep as it is. I’m talking to a science journal about some sort of show. There’s lots of things on the table, and lots of things to think about. At the moment it’s all up in the air. My plan was always to do postgraduate study, but the more I do this, the more excited I get by science communication. It really bugs me how little attention science gets in the media. I can take something that I think should be news, and make it news. Sometimes hundreds of thousands of people will have clicked on it.

Q: How do you explain that? Why are readers so invested?

A: For a lot of people, science is an interest they never realized they had. You get into a rut as a child. If you don’t get taught this stuff early on, or if your parents aren’t interested, you think science is boring, but it isn’t—it’s this amazing, incredible, fantastic world that most people don’t even realize exists. I consider IFSL a gateway drug to science. The emails and comments I get attest to this: it’s opening them up to it. It’s like, “This stuff is amazing and I didn’t know that, and now I do, and I want to learn more.”

Q: Your enthusiasm comes across on the site.

A: I f–king love this stuff. I get so excited about it. I feel so strongly and passionately about that and I hope that comes across. I really think that enthusiasm is infectious.