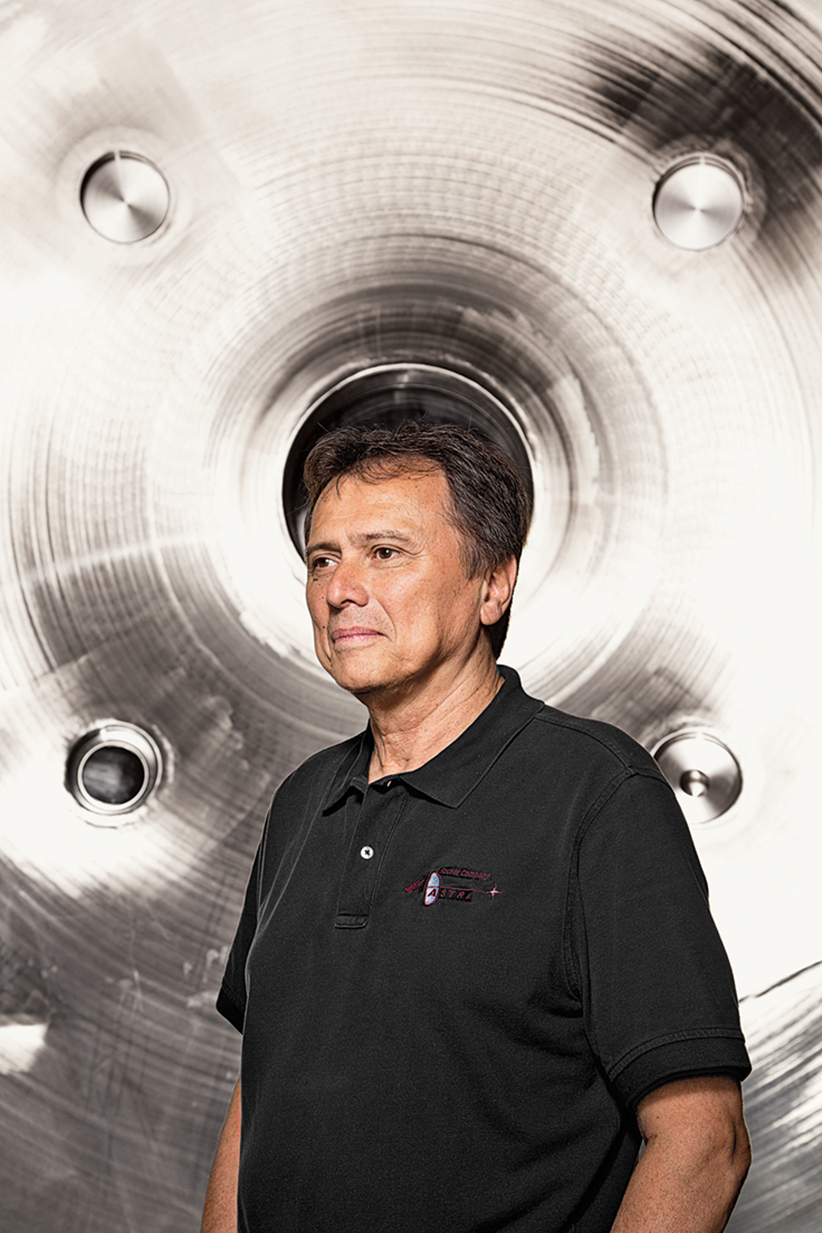 The man who wants to change the future of space travel drives a 1983 Volkswagen Jetta. Rusted and worn, the silver-coloured beater gets Franklin Chang Díaz from A to B, but he also finds it useful for making a point. Some tasks are better suited to cheap workhorses than expensive thoroughbreds.

Sitting in a conference room at his Ad Astra Rocket Company—a grandly named, six-person enterprise tucked behind a strip mall, next to a tire shop, three miles down the road from the Johnson Space Center in Houston—he enumerates the list of space’s lower-profile to-dos: Cleaning up the tens of thousands of discarded launchers, dead satellites and other junk now circling high above Earth. Ferrying cargo to an eventual base on the moon. Re-boosting the International Space Station. Towing asteroids off collision courses. Hard and heavy work that calls for what he describes as the “diesel engine of space.” A super hot, super efficient and (relatively) inexpensive electric rocket that Chang Díaz has been test-firing in a vacuum chamber just down the hall for the past six years.

The VASIMR—variable specific impulse magnetoplasma rocket—engine is based on some concepts that scientists have long been trying to put into practice to build a workable nuclear fusion reactor. A gas, like argon, xenon, or hydrogen is pumped into a metal tube and bombarded with electricity that has been converted into twisting, helical radio waves. The oscillating energy waves ionize the gas, turning it into what is known as a “cold” plasma—although it is hotter than the surface of the sun. Kept in check by a force field generated by superconducting magnets, the plasma flows farther down the rocket into a second chamber where it is hit again by radio waves, but twisting in the opposite direction. As the ions circle the tube, going faster and faster, the plasma becomes super heated, reaching a temperature closer to the sun’s core, a couple of million degrees. The rocket succeeds where fusion experiments struggle because it doesn’t need to keep hold of that beyond-white-hot plasma. Instead, a magnetic nozzle directs it out of the tail at exhaust speeds approaching 180,000 km/h.

The technology is proven—at least on Earth. “We’ve fired it 10,000 times and it always works,” says Chang Díaz. His original 200-kw prototype, with its casing decorated with the flag of his native Costa Rica, the United States and other countries, including Canada—Nautel, a Halifax company, built the radio frequency amplifiers—is now in pieces in his lab. But the inside of the vacuum chamber gives an impression of its power. At the front, where the body of the rocket sat, the thick, stainless steel walls have been blued by heat. Toward the rear, where the plasma exited, they have been burned clean and shiny. The armoured edge of a platform that holds probes to measure temperature and power, looks like it has been chewed by mice, dotted with tiny holes blasted out by plasma ions. The prototype could only be fired for about 20 seconds at a time before the extreme heat started to overcome the vacuum chamber’s four large pumps. Ad Astra is currently upgrading the heat exchangers in preparation for tests of a 100-kw version of the rocket, with a core constructed from silicon nitride, a chemical compound almost as tough as diamonds. The plan is to let it run for hundreds of hours to assess its durability.

Heat counts when it comes to rockets because the hotter the exhaust, the more efficient the engine. Data suggest the VASIMR is about 10 times better than conventional rockets at converting propellant to thrust, meaning it can travel a lot farther for less. Scaled up, it could also be faster, since speed in space is limited mostly by how much fuel a craft can carry and burn. “The rockets we have now are all big bang and coast,” explains Mark Carter, Ad Astra’s technology director. “With ours, you turn it on and leave it on.”

LISTEN: Col. Chris Hadfield on why Chang-Díaz’s work is vital

Chang Díaz has been working on the VASIMR for close to four decades, having first developed the concept when he was pursuing his Ph.D. in plasma physics at the Massachusetts Institute of Technology (MIT) in the late 1970s. But the idea was beyond the limits of the era’s technology, and was moved to the back-burner when he was selected as an astronaut in 1980. He ended up flying on seven Space Shuttle missions—he’s co-holder of the NASA record for most trips into orbit—and performed three space walks. But he never gave up on his engine dream.

Strangely, NASA wasn’t that interested in his experiments. When he first moved to Houston, they forbid him from bringing his MIT work along with him. “Being an astronaut was a really bad handicap,” he says. “Because they never think astronauts can do anything other than push buttons.” In 1995, Chang Díaz was finally permitted to set up a propulsion lab at the Johnson Space Center, and given $50,000 to hire an assistant. (That first employee, Jared Squire, is still with him and now serves as Ad Astra’s senior VP of research.) Cadging funds and poaching brainpower from other NASA projects, he nursed the work along until his retirement in 2005. On his way out the door, Chang Díaz convinced administrators that his concept could be developed faster and cheaper outside of the space agency. Striking a deal to privatize the VASIMR, he set up his own rocket company, choosing the Latin phrase meaning “to the stars” for its name, and investing $50,000—all of his family’s savings.

Within a few months Ad Astra found its first private patron, a European angel investor who committed US$8 million, eclipsing the amount that NASA had spent over 25 years. Today, the company has 250 patrons and has raised a total of $30 million. At age 65, the former space traveller finally feels like he’s getting somewhere. In March, NASA awarded the company a three-year, $10-million contract, underwriting the new prototype’s durability tests; the final technological hurdle before Ad Astra starts in on a space-ready product. If all goes well, Chang Díaz believes he can have a solar-powered version of the VASIMR available for dry runs on the International Space Station in three years at a cost of $100 million. “It’s not that much,” he argues. “They’re spending two or three billion to build gigantic rockets, based on the same old 1960s technology.” (NASA first tested its new Space Launch System, the most powerful conventional booster ever built, in the Utah desert on March 11. It successfully fired for two minutes, about the same length of time it will need to propel the new Orion capsule off Earth and into deep space.) 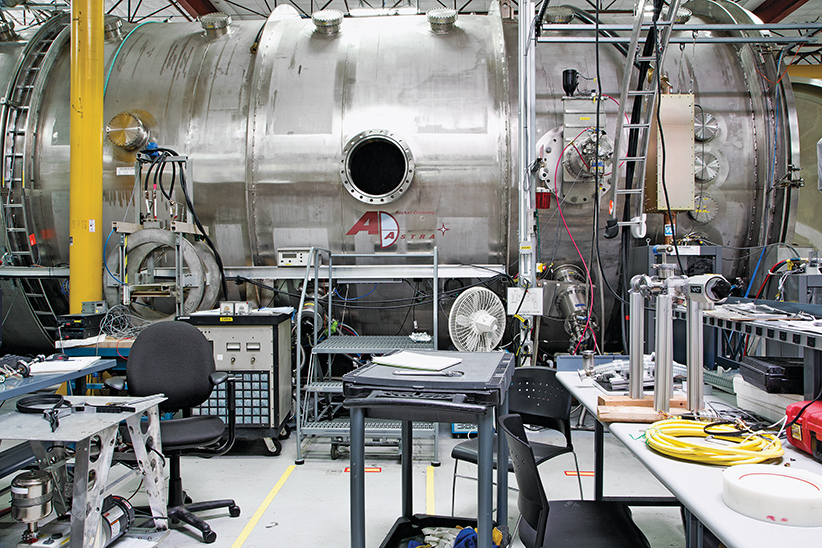 Ad Astra’s proposal for a 40-kw “Jaguar” VASIMR that could be permanently attached to the ISS and regularly fired to keep it in a stable orbit, should be of particular interest to the agency. Right now, the U.S. government is paying the Russians more than $200 million a year to do the job with a visiting Soyuz capsule. Chang Díaz estimates the Jaguar could perform the task for $20 million annually.

Those who have bought in to Ad Astra like the diesel engine analogy because they see future profits in what amounts to the trucking side of space. But the former astronaut harbours deeper ambitions. “We don’t talk about going to Mars because our investors don’t give a damn about going to Mars,” he says. A souped-up, nuclear-powered version of the VASIMR could cut the travel time to the red planet from eight months to four, or maybe as little as a few weeks. On a wall near Ad Astra’s boardroom, there is an artist’s rendering of what such a craft might look like. It resembles a floating refinery more than the Millennium Falcon; a jumble of giant, hotdog-bun-shaped tanks containing the liquid hydrogen fuel for the rockets, and golf-ball-like spheres filled with nitrogen to pump them out. The crew quarters are buried deep in the centre, effectively shielded from most of deep space’s radiation. “To me, as an astronaut, if you are going to Mars, you want to go fast,” says Chang Díaz. “There’s no real limit to speed if you get enough power.”

The VASIMR isn’t the only new rocket technology under development. A group of researchers at the University of Washington also have a NASA contract to explore a system that uses powerful magnetic fields to crush metal rings around plasma, briefly compressing it into a fusion state and releasing vast amounts of power. Experiments on nuclear thermal rockets, which split atoms rather than join them, have been going on since the 1950s. The British aerospace engineer Roger Shawyer is working on something he calls the EmDrive, which pumps microwaves into a special resonating cavity to create thrust without any moving parts, or fuel.

The NASA probe Dawn, which recently started orbiting the dwarf planet Ceres in the asteroid belt between Mars and Jupiter, is already using a solar-powered ion engine. But the Dawn version, which ionizes its xenon gas fuel via metal grids immersed directly in the flow, is forced to operate at much lower plasma density to avoid melting down, and has a maximum thrust of just 2.7 kw. Chang Díaz dismisses his competition as “a hair dryer.”

But even if ion drives do become the workhorses that Chang Díaz envisions, there will still be a need for conventional rockets. Electric engines, whether solar or nuclear, can’t deliver the raw power needed to break free of Earth’s gravity. In space, however, their advantages are obvious, especially as we seek to travel great distances. By some estimates, sending a chemical rocket to Mars will cost more than $12 billion for launch fuel alone.

Chang Díaz has more honours and awards than he knows what to do with. But there’s no doubt that seeing his invention at work, up where it belongs, would be his greatest accomplishment. “I am in love with space. This is what I dream about when I sleep,” he says. “I really believe that this technology can be disruptive, that it can transform the way we travel.”

And after 40 years, finally prove that there’s more than one way to get from A to B.

Get to know the great unknowable. Read Maclean’s special Space issue, on newsstands this week and on Next Issue, Apple Newsstand and Google Play.