Handling concussions is a team sport. And we all need to be in the game.

In the wake of Sidney Crosby's head injuries, a top Canadian expert explains the huge changes on how concussions are treated and managed 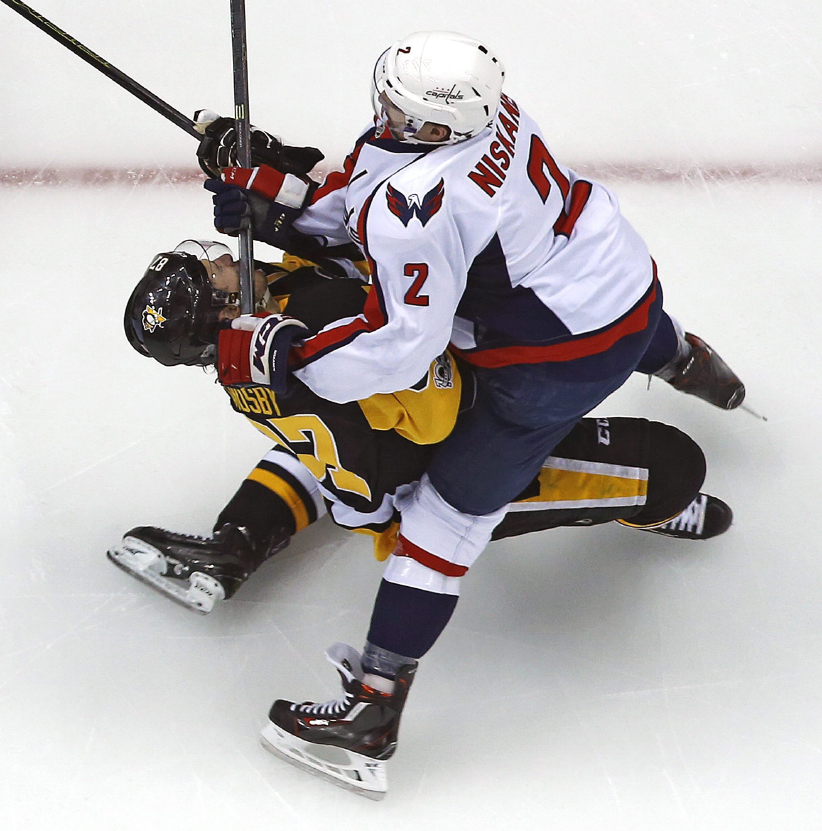 Pittsburgh Penguins’ Sidney Crosby (87) takes a hit from Washington Capitals’ Matt Niskanen during the first period of Game 3 in an NHL Stanley Cup Eastern Conference semifinal hockey game against the Washington Capitals in Pittsburgh, Monday, May 1, 2017. Crosby left the game and did not return. The Capitals won in overtime 3-2. (Gene J. Puskar/AP)

As a brain and spinal surgeon, I have encountered many patients with diseases and injuries that are catastrophic. Concussions weren’t on that list in the 1960s, but they are now—and it will take a huge team of informed and willing people to get concussions off that list.

When I went to medical school some time ago, concussions weren’t even in the curriculum. It was considered a “ding” or “seeing stars”—too trivial a problem for a person to see a doctor. “Give them smelling salts,” they’d recommend, “and tell them to get back into the game.” However, about 30 years ago, we began to realize that concussions were causing major problems. We encountered boxers whose brain damage made them look “punch drunk.” Yes, they looked like they had too much to drink, but it was because they had damage to the memory centres of the brain accounting for their memory loss, even dementia, and because they had suffered damage to the movement centres of the brain that caused their stumbling and lurching. Now we have strong evidence that boxers’ Alzheimer-like dementia and Parkinson’s-like gait were due to brain damage caused by concussions, and it is evident that this problem is not confined to boxers but may be found in athletes in any sport which causes multiple concussions.

Today, there’s more knowledge about concussions than ever before. We now know that about 200,000 concussions occur annually in Canada, that a concussion is a brain injury, and not everyone gets better. We know that in children and adolescents, sports account for more concussions than any other cause, but in adults, concussions occur more frequently at work, in traffic crashes, and in falls at home (especially in seniors). And we know that there is a spectrum of health problems due to concussions: second impact syndrome, post-concussion syndrome, mental health disorders such as depression and anxiety, and brain degeneration, now referred to as chronic traumatic encephalopathy or CTE. Collectively, these concussion disorders are a major public health concern affecting large numbers of people.

This thinking about concussions may be in the air more than ever right now, amid the high-profile concussions suffered by Pittsburgh Penguins superstar Sidney Crosby, who has endured several hits to the head this postseason that have caused his career’s fourth and possibly fifth concussions (of which we are aware) in the second round of the Stanley Cup playoffs. Last year, the Canadian Concussion Centre at the Toronto Western Hospital, which I lead, published a research paper on 37 NHL players who had to end their hockey careers because of concussions between 1995 and 2015. We are also aware of the large number of NFL players who recently received a settlement to pay for their costs of treatment for their post-concussion symptoms. Concussions can certainly end careers in sports and other activities. Post-concussion syndrome is the term used to describe concussed people who don’t get better within the usual time—say, three months from their last concussion. This happens to a large number of concussed Canadians, perhaps as many as 25 per cent of those with multiple concussions.

RELATED, FROM 2011: The truth about concussions

But this thinking is also timely because concussion experts recently convened for our quadrennial conference in October in Berlin, with the results and information from it published just last month. Indeed, concussions are now important enough to be the subject of international conferences, with these results published in leading scientific journals and incorporated into our methods of looking after concussed people. As examples, we now have evidence that kids and adolescents concuss more easily and take longer to recover, and that for all ages we should shorten the “quiet time” after a concussion to about 24 hours before proceeding to earlier and more vigorous exercise, while still recognizing the importance of not exceeding the “threshold” for provoking worsening of symptoms—new research that is particularly salient amid the debate over Crosby’s quick return to the ice, missing one game after his fourth concussion.

Concussion knowledge like this is guiding how governments go forward in protecting Canadians from concussions. This new information will help in the development of the “harmonized concussion guidelines” requested in 2015 by Prime Minister Justin Trudeau, who asked the federal ministers of sport and health to take action on improving concussion management. In 2016, Sport Minister Carla Qualtrough and Health Minister Jane Philpott commissioned Parachute Canada, the country’s leading national injury prevention agency, to take on the task of improving the management of concussions in all sports in Canada.

For example, Kathleen and Gordon Stringer, the brave parents of Rowan Stringer, have been campaigning vigorously for concussion laws. Stringer was a 17-year-old rugby player who died in Ottawa in 2013 from repetitive concussions after suffering her third blow to the head in less than a week; at her inquest, it was revealed that the concussions went unrecognized by most of the adults she encountered during the few days between her first concussion and her fatal head injury. This was a preventable death, and Kathleen and Gordon know that. Rowan’s Law mandates concussion education for teachers, coaches, trainers, parents and athletes, as well as better management of sports concussions including removal from a game or practice of any athlete suspected of a concussion with early referral to a medical doctor. Many of the concussion laws elsewhere include concussion prevention programs such as making players and parents sign a “code of responsible play” at the time of registration. But while these laws are now in effect in all 50 states in the U.S.A., that’s not the case in any province of Canada.

There’s also PPM158, a set of school board policies introduced in Ontario in 2014 by the Ministry of Education, which mandates improved concussion education for players, parents, coaches, teachers, referees and others who might be in a position to recognize when a player may have sustained a concussion in public elementary and high schools. PPM158 also provides guidelines for improved management of concussion. But no other province has a similar province-wide program, and unfortunately, PPM158 applies only to school-based sports, whereas the majority of sports concussions occur in non-school sports. In Canada, we need concussion laws that apply to both school-based and non-school-based concussions.

MORE: In a star’s death, rodeo arrives at its NFL moment

In 2016, the Ontario legislature enacted a law to establish a committee that includes Gordon Stringer and me to deal with the 49 recommendations made by the Rowan Stringer inquest jury. The jury’s first recommendation was that the Ontario government should adopt an act to be called “Rowan’s Law” governing all school-based and non-school-based sports for the purpose of ensuring management of all concussions based on the international guidelines referred to above. It is my hope that all provinces will ultimately enact similar concussion legislation.

Canadians are hard-working, hard playing and hard driving, and generate about 200,000 concussions a year. Since concussions are now known to be a life-and-death public health concern, we need better prevention, education, and management strategies to deal with concussions. Sidney Crosby has a tough decision to make, but so do we. We all need to be on the concussion team for recognizing when a concussion might have occurred, and managing them correctly.

Charles H. Tator is the director of the Canadian Concussion Centre at Toronto Western Hospital and University of Toronto.