Notanee Bourassa immersed himself in aurora borealis as a way to escape his troubles. One night, he saw something new and amazing. 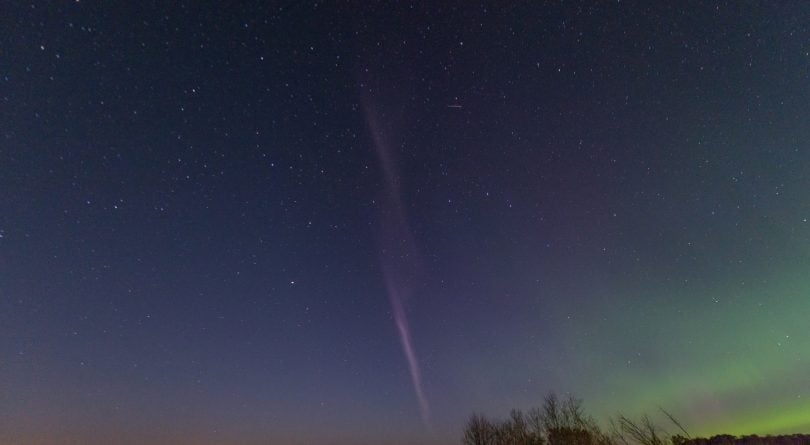 Notanee Bourassa was a teenager in a run-down part of Regina. His father was dying of lung cancer. School and home were trouble alike. Then he tilted back his neck.

“The Northern Lights allowed me to escape all of that and to realize there’s more to life than where you are right now, and to survive,” he says, 30 years later. In his first sighting, he says bands of light on both sides of the sky appeared to meet in a continuous arc. “The aurora ribbons had actually joined, and I was underneath the ribbons in a back alley because it’s the darkest place I could find. I was hooked.”

Bourassa is an everyday citizen who helped NASA and other scientists identify for the first time a light display in the sky, on which they published a journal article in Science Advances. The purple and green streaks resemble an aurora borealis, but scientists say it’s a different phenomenon that “may be an extraordinary puzzle piece” in understanding Earth’s magnetic fields. Bourassa photographed the light and says he called it “Steve,” a name from an animated movie, for which scientists later matched an acronym: Strong Thermal Emission Velocity Enhancement.

Researchers across North America and in the United Kingdom are now studying STEVEs; NASA has called for more citizens to help collect data on them; the discovery could be important for future aircrafts, and one of the catalysts behind the research was a 45-year-old father with a camera and a celestial coping mechanism.

For the first time, we have a better understanding of a mysterious phenomenon in the sky called STEVE, thanks to citizen scientist and satellite views. These new findings help us learn how Earth interacts with charged particles in space: https://t.co/XufYbfa2Bk pic.twitter.com/qPKKAs9Il4

“The great magician out in the cosmos is making Northern Lights for us,” says Bourassa, who now works as a technical assistant for Sask Tel and, in recent years, has sought out the Lights one to four times per week. “That’s what keeps me going out there—just to get a feeling of, there’s something more to our lives than going to work and going to Walmart.”

On July 24, 2016, around 11 p.m., Bourassa drove to a wheat field 21 km from Regina to photograph the sky, bringing his five- and seven-year-old children because it was not a school night. From other “aurora chasers,” he had heard rumours of an unidentifiable glow, which they inaccurately called a proton arc, and which can last from 20 minutes to one hour.

“As it started to rain a little bit, out of the corner of my peripheral vision on the left, I had noticed there was a streak in the sky,” Bourassa recalls of the summer night. He rushed to change the settings on his camera and reposition it on his tripod on the gravel road. “I was thrilled and a lit bit panicked because I wanted to get good data.”

Bourassa had seen the Dreamworks movie, Over the Hedge, in which a group of animals one day discovers a man-made formation of shrubbery. Lacking a word for the hedge, a squirrel proposes they call it “Steve,” and thus his friends start worshipping “oh great and powerful Steve.” When Bourassa started talking about his sighting with other aurora enthusiasts on Facebook, he applied the name to what scientists later identified as a subauroral ion drift.

Bourassa tweeted about the light he’d seen, which was also captured by imaging equipment of the University of Calgary and the University of California, Berkeley, and later by other institutions including Athabasca University. Bourassa says he connected on Twitter with a heliophysicist, and soon, a scientist named Elizabeth MacDonald from the NASA Goddard Space Flight Centre in Greenbelt, Maryland, became the lead author on the paper published in March, along with 15 other authors based in Canada, the United States and Britain.

“Steve” stuck, as one American scientist realized the name could appropriately stand for: Strong Thermal Emission Velocity Enhancement (since the initials came before the words, they call it a “back-ronym”).

A traditional aurora borealis is a product of electrically-charged particles interacting with oxygen that get discharged as light, with green and red colours occurring depending on the pressure and violet caused by nitrogen. A STEVE is a similar process but travels on different magnetic field lines, closer to Earth. 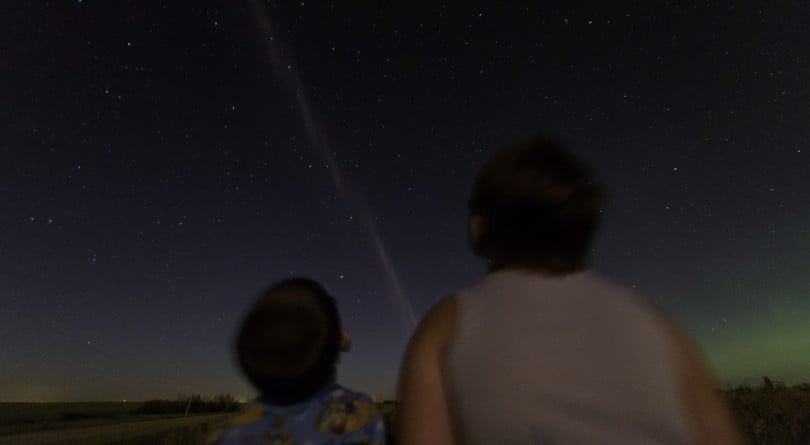 The children of photographer Notanee Bourassa gaze at a STEVE, or “Strong Thermal Emission Velocity Enhancement” near Regina on the night of July 24, 2016. (Notanee Bourassa)

“It seems to be a channel of very hot air, very high up, that gets hot enough that it starts to glow,” explains Martin Connors, a physics professor at Athabasca University and an author of the recent journal article on STEVEs. “When you find a channel of gas as hot as the surface as the sun, and it’s 100 km above our heads, you kind of want to know why.”

RELATED: Burst of energy from the sun will create spectacular northern lights across Canada

An aurora borealis appears in broad bands of light sometimes called “curtains,” but a STEVE comes with skinny off-shoots. “It seems to have these green fingers associated with it,” says Connors. “To me those are very mysterious.”

Understanding this phenomenon could be still more important if future aircrafts fly at altitudes where STEVEs appear, Connors says. “If you’re suddenly in a channel of really hot gas, you’d want to be prepared for that.”

Climate change is highly unlikely to be a cause of STEVEs, Connors says. Rather, he suspects they are being seen every few weeks because technology is improving, enabling even iPhones to capture them—“less climate change than camera change,” he says.

RELATED: How to build a culture of science

Bourassa’s sightings reinforce the value of citizen science and also reinforce memories of his father, who he watched wither from a 230-pound man to a skeletal figure with a tube draining his lung. He died after two and a half years of severe illness when Bourassa was 15.

“I hadn’t really told him that I was watching the Northern Lights in the alleyway,” Bourassa admits. The Lights are miraculous, he says, for when a person is grieving, “it doesn’t make sense to a rational-thinking person, but it seems like they, for you, are dancing.”