How to watch the Leonid Meteor Shower this weekend, in person or online

Stargazers in Canada’s prairie provinces are likeliest to get the best view of the annual Leonid meteor shower, but you can livestream it online too 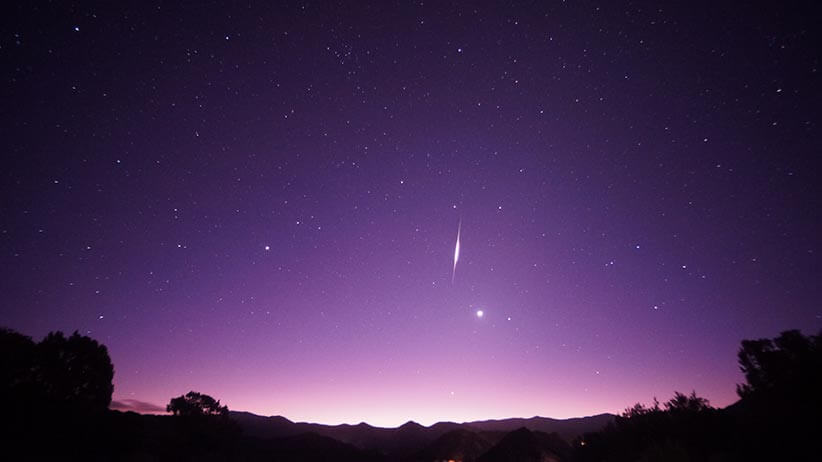 A Leonid meteor captured shortly before dawn in 2012. (Mike Lewinski/Flickr)

Sky-watchers, you’re in for a real treat. The Leonids are set to make their annual appearance this weekend (November 17 and 18), producing up to 10 to 20 speedy meteors per hour for your viewing pleasure.

What can you expect to see?

The Leonids are essentially pieces of cosmic material left behind by passages of Comet Tempel-Tuttle. Thanks to this comet, you’re in for a night of dazzling “shooting stars.”

According to Space.com, “The Leonids are white or bluish white, many are faint, [but they] can appear outstandingly bright, leaving glowing trains in their wake.”

But don’t expect this event to transform into an intense meteor storm as it’s occasionally done in previous years. Most notable among them was the Great Leonid Meteor Storm of 1966. During this time, thousands of meteors per minute fell through the Earth atmosphere.

This year you might only spot a few dozen meteors (per hour). While it’s not as extravagant as a celestial storm, the Leonids are known for its brilliant fireballs, which are brighter meteors that can leave behind a streak of colour. So, you’ll still be treated to a stunning spectacle.

When and where should you look?

True to its name, the Leonids radiate from the constellation Leo. But you don’t necessarily have to look in that direction.

“People have gotten the mistaken idea that you must know the  whereabouts of a meteor shower’s radiant point in order to watch the meteor shower. You don’t need to,” says EarthSky.org. “The meteors often don’t become visible until they are 30 degrees or so from their radiant point. They are streaking out from the radiant in all directions.” Meaning the Leonids, like all annual showers, will appear in all parts of the sky.

Under ideal weather conditions, the best time to view this shower is between the hours of midnight and dawn.

Who will have the best view in Canada?

Residents of southern Ontario will have a fair chance at viewing the Leonids on Friday evening, even though cloud cover will be increasing. However, due to a storm system rolling through, Ontario and Quebec will be a no-go on Saturday evening.

Overall, the best spots for viewing the meteor shower will be in Manitoba and Saskatchewan, with parts of Alberta seeing clear to partly clear skies as well on both nights.

The Leonids are visible to the naked eye, so telescopes or any type of advanced equipment aren’t necessary. But if you’re unable to see them in person, the entire event will be live streamed on slooh.com.