Our war with invasive species has been as futile as the war on drugs. Witness the 30,000 Burmese pythons in the Florida Everglades. 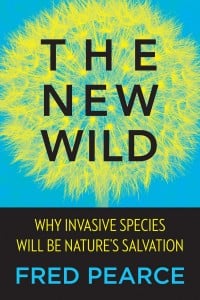 The New Wild: Why Invasive Species Will Be Nature’s Salvation

For something that sets off alarm bells—zebra mussels! kudzu! Asian carp!—invasive species are a strangely natural phenomenon, as old as life itself. All species start somewhere, and move on from there. Conservationists willing to go to war with the invaders, argues Pearce in his lively polemic against what he has come to view as a moral panic, are highly selective when it comes to identifying the enemy. Australia’s 100 million sheep—that’s a 1 followed by eight zeros—have done more damage to the native ecosystem than rabbits, but no one considers them aliens; many Australians, on the other hand, think of dingoes as non-native, 5,000 years after their arrival.

And we always excuse ourselves, the ultimate ecology-warping invasive species, from the discussion, even though a case could be made that humans should be eradicated from every continent but Africa.

Yes, there are horror stories, Pearce agrees, especially on small islands where human-introduced species have wreaked havoc—none worse than the two million mutant mice (now 25 cm long and carnivorous) who daily eat a tonne of bird flesh per acre on Gough Island in the South Atlantic. But, in most cases, aliens simply replicate life as the planet has known it: They arrive, upset the apple cart (sometimes drastically), then settle down as ordinary eco-citizens. They often, in fact, provide crucial benefits for earlier residents: A third of California’s native butterflies now depend on exotics for food. If the naturalness of the process isn’t enough, writes Pearce, consider the record: For the most part, in ways large and small, our war with the invaders has been as futile as the war on drugs.

Take the Florida Everglades. Since the 1990s, and despite organized hunting efforts, Burmese pythons have flourished there. (Pearce points the finger not at frightened pet owners but at the destruction caused by 1992’s hurricane Andrew, which included knocking out walls and smashing cages in a warehouse holding more than 900 pythons.) The estimated 30,000 Burmese snakes have devastated local rabbit, raccoon and opossum populations, perhaps by 90 per cent. That means the python numbers, too, will soon crash in the absence of prey, and they may well become just another of the many species of plants and animals—a quarter of the Everglades’ total—that have arrived in recent times.

The kicker, though, is that there wasn’t an Everglades at all until 5,000 years ago; it has never settled into a fixed form, but alters profoundly with changes in sea levels. If those levels rise as high as some climate scientists fear, the entire question will be academic very soon.