In the Klondike, a gold rush becomes an old rush

From 2015: Discoveries of gold and ancient fossils go hand in hand in the Yukon. But the mammoth tusk trade has a dark side. 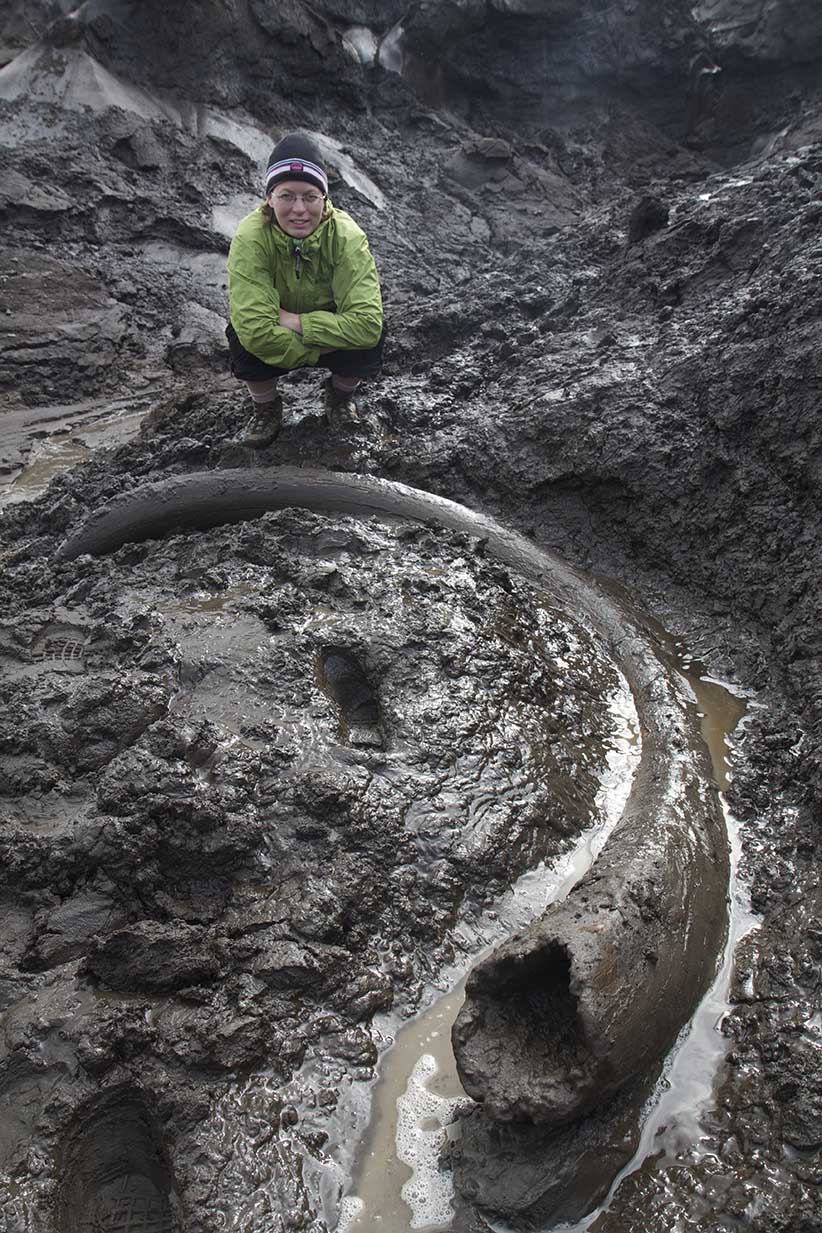 When his employees’ dog dragged a fossilized horse skeleton through the black muck toward him, Yukon miner Stuart Schmidt was amazed. Even though the remains were at least 10,000 years old, they were incredibly well preserved. “The connective tissues that held the spinal column together was still connected to the pelvis,” says Schmidt, a gold miner of 30 years with an eye for paleontology. “You could see the individual vertebrae in its spine perfectly.” Schmidt called a government paleontologist who asked him to keep the fossil cold until someone could make the five-hour drive to collect it. So Stuart put the horse in a freezer.

It’s a quirk of geology and geography that the Yukon is home to a bounty of both gold and ancient fossils, and in the Klondike the two worlds—mining and fossil research—are intricately bound. At one time, a vast swath of the Canadian North was part of Beringia, an ancient land bridge that connected North America and Asia during Earth’s most recent ice age. And with the climate too dry for glaciers to form, it became home not just to prehistoric horses and bears, but also sabre-toothed cats, mammoths and even camels. “We find everything, from partial frozen preserved carcasses with hair, skin and muscle that’s freeze-dried attached to it,” says Grant Zazula, a Yukon paleontologist who has worked in that area for 16 years. “We get mammoth tusks that are 12 feet long and are rock solid ivory that weigh 250 lb. We find leg bones and teeth and jaws and skulls of a whole variety of ice age mammals. The whole works.”

The key to uncovering Yukon’s fossil treasures has been the process used by the mining industry to find gold in the Klondike. Gold is trapped in bedrock under a thick, muddy substance called loess (pronounced “lust” without the t) which has formed over millennia and can be as deep as 24 m in some places. To reach bedrock, miners must blast away the muck with high-powered water jets, exposing the perfectly preserved fossils. Elizabeth Hall, one of two full-time paleontologists with the Yukon government, regularly gets called out to mines to collect fossils. “I’m friends with one of the miners on Facebook, so he sent me a message to let me know that they had 80 bones,” she says. After loading fossils into a pickup truck, Hall and her partner dry them out in a so-called bone tent until winter, when researchers can study and identify the specimens. 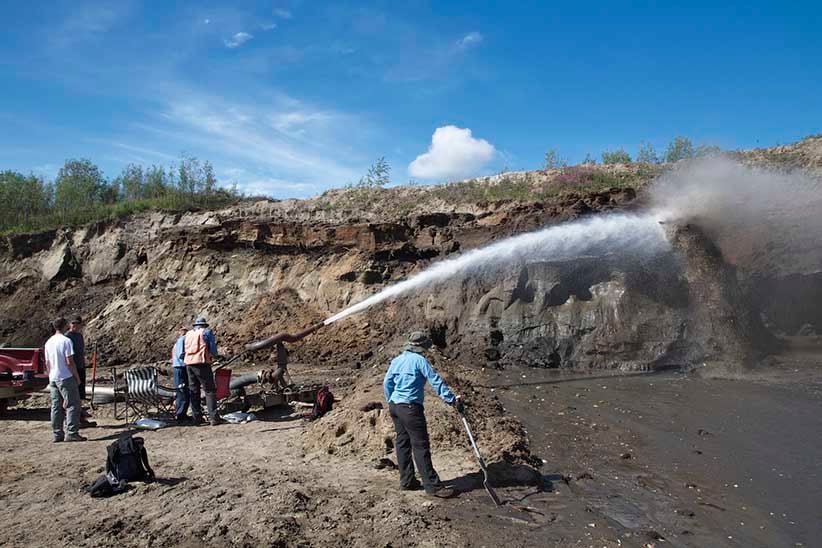 The unique relationship between Yukon gold miners and paleontologists goes back more than a century. In the late 1800s, Canadian geologist R.G. McConnell established the earliest recorded fossil collection in the region at the tail end of the gold rush. C.R. Harington, an internationally renowned paleontologist, conducted his doctoral research in the gold fields between 1966 and 1975. Schmidt fondly remembers gathering fossils for Harington as a young man. “For years, Dr. Harington was using us kind of as his private excavating team. He’d come up from Ottawa every year, collect them from us, have dinner with us and tell us stories about them,” says Schmidt.

The fossils are valuable to scientists because they are so well preserved. Ancient mammoth tusks contain rings similar to the rings of a tree trunk, and they hold information about the animals’ age, health and eating habits. Geneticists use the DNA to study how different species were related. The location of a find can also provide clues about migration patterns. Last month a study published in the journal Molecular Biology and Evolution revealed findings from the 2008 discovery of several camel fossils at a gold mine near Dawson City. Genetic testing closely linked the now-extinct western camel to Arabian camels from the Middle East and not, as was previously thought, to South American alpacas and llamas. Even the black muck is a useful tool for geologists as it contains the remnants of Beringia’s landscape and environments. “There aren’t too many places in the world where you can drive up the highway, and find places where this abundance of ice age mammal bones are being found,” says Zazula. “If you wanted to do this kind of work in Siberia, the logistics of getting there and dealing with the Russian authorities is a nightmare.” 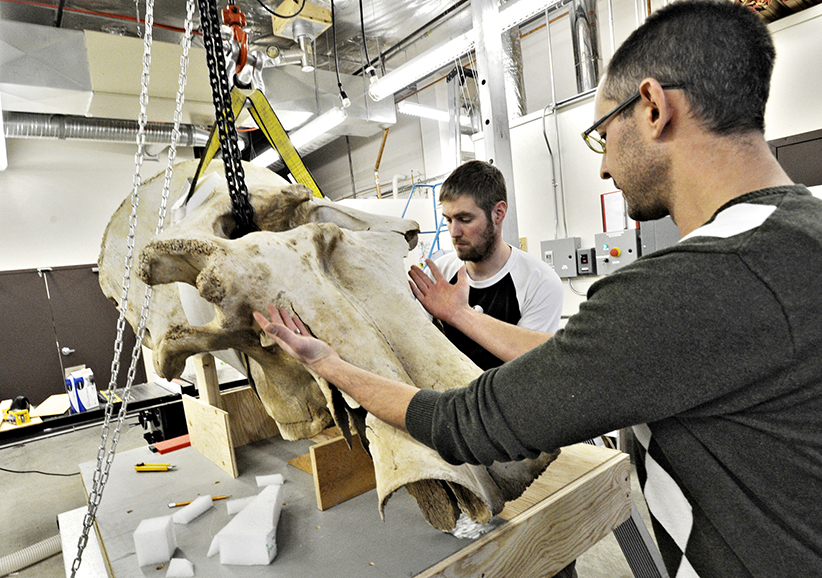 As valuable as mammoth fossils are to the scientific community, their worth on the open market has been soaring. With the sale of ivory from elephants banned internationally, traders have begun to market mammoth ivory—primarily obtained from Siberia—as an alternative under the name “ethical ivory.” As a result, says Zazula, tusks can be worth a small fortune. “A miner might sell the tusk for $5,000 to a middleman who turns around and sells it to a broker or collector in Vancouver for $10,000,” he says. “From there it might be taken to China, Hong Kong or Southeast Asia and unloaded for $20,000.” But this booming trade has also created cover for nefarious traders who pass off elephant ivory as coming from mammoths—especially in China, where tusks are often ground up and used in traditional medicines. “We are aware that there are some pretty unscrupulous individuals out there who will claim that their elephant ivory is fossilized in order to peddle it,” says Jeff Hunston, manager for the Heritage Resources Unit for the Yukon government. Conservation groups are pushing for stricter controls to be placed on the mammoth tusk trade, and so far, New York and New Jersey have passed laws banning all ivory sales regardless of origin.

It’s something for which the Yukon government is increasingly on the watch. Miners can only sell fossils or tusks to outside parties after Zazula or a member of his team have certified that the items hold no scientific or historic value. But ultimately it comes down to trust. Given how remote so many gold mines are, it would be impossible to police the trade. Which means the dynamic between paleontologists and miners will go on as it has for a century. “We rely on goodwill and close interaction,” says Hunston. “The miners like to see the benefits publicly of assisting us. It’s such a huge part of our heritage in the Yukon.”