Canadian astronaut Chris Hadfield reveals the cover he chose for the Maclean's Space issue that he guest-edited, out now

Maclean’s is pleased to welcome Col. Chris Hadfield, Canada’s most admired and multi-talented astronaut, to our pages. Hadfield is certainly no stranger to the magazine, having graciously agreed to have his face painted with a David Bowie-style lightning bolt for our cover two years ago. This time around, however, he’s more than just a pretty face. We put him to work.

As guest editor of our special Space Issue, out on digital platforms like Next Issue, Apple Newsstand, and Google Play now and physical newsstands this week, Hadfield brought to bear his vast experience living and working in space. He played a key role in determining the stories and selecting the images you’ll see. He read every word of the package, correcting some facts and popular misconceptions, and even catching a spelling mistake or two. He also wrote an erudite editorial putting the exploration of space into the context of human history. And his passion for a Moon base as humanity’s next logical step into space, as well as his opinion that manned flight to Mars remains unrealistic in the foreseeable future, led us to rethink how we treated these two topics. Successful space exploration, he argues, must inevitably be driven by incremental steps toward practical goals; we agree. He even brought his guitar to the office and sang a few songs. When it comes to the science and significance of space travel, few people are as convincing, or engaging, as Chris Hadfield. We hope you enjoy his contribution to the magazine as much as we did.

One of the tasks we asked of Hadfield was to choose our cover, giving him six options that we also put in front of Maclean’s readers to vote on in this poll. He took the task seriously, establishing a strategy for how he would pick them from the pile. “I spend a lot of my life in airports,” he said. “I picture myself walking by the newsstand at the airport and looking over and seeing that picture on the cover of Maclean’s.

He had plenty to say on the options. On cover #1 (pictured here), he was aware that the cover may not stand out from other space offerings on newsstands. “You don’t want to be confused with Popular Science, where there’s always something like that, where it’s always ‘the spacesuit of the future,’ and it always will be.” He also didn’t love cover #2 (pictured here), suggesting that it was “too Star Wars.”

His favourite, though, was actually the favourite cover as chosen by Maclean’s readers according to our poll, which edged out cover #6 (pictured here) by six percentage points at press time. Check out his choice, then read Col. Hadfield’s essay on the human nature for space exploration, and then read the issue on Next Issue, Apple Newsstand, and Google Play. 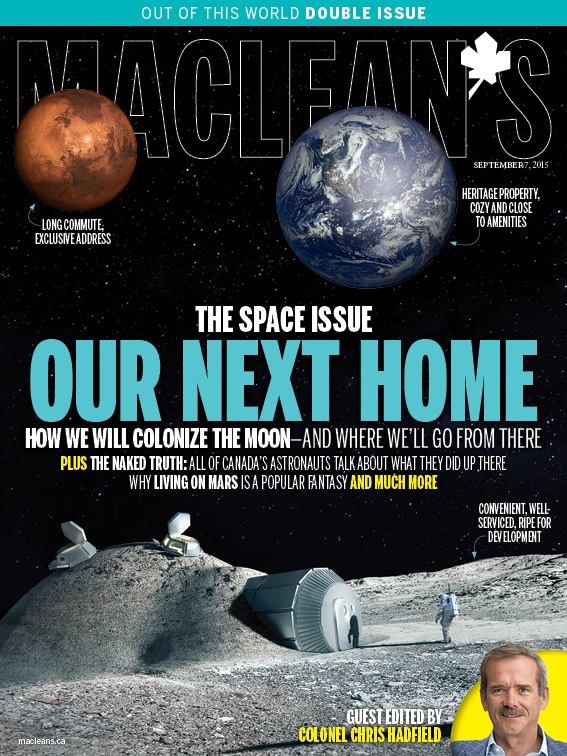