Is geoengineering the solution to saving the Earth?

Climate-change skeptics and environmentalists both hate the idea. But is ‘veiling’ the Earth the only quick solution to a climate change-catastrophe? 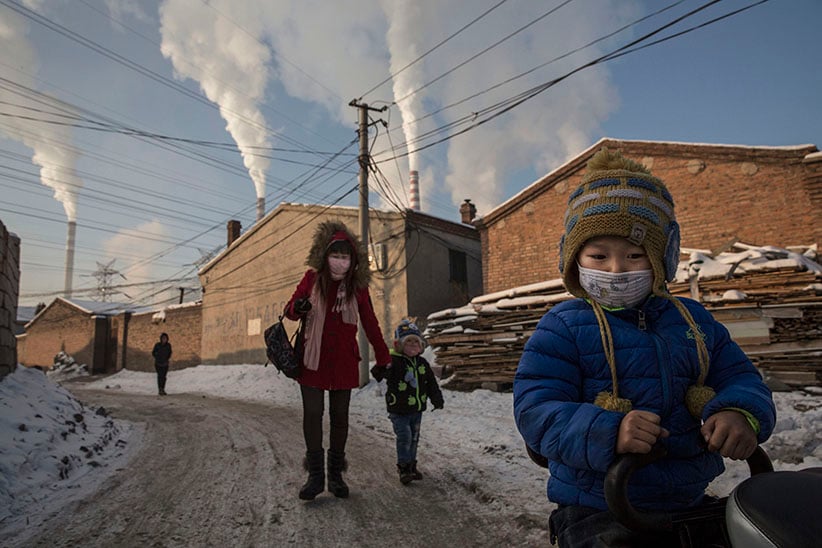 Chinese residents wear masks for protection as smoke billows from stacks in a neighbourhood next to a coal fired power plant on November 26, 2015 in Shanxi, China. (Kevin Frayer/Getty Images)

On a snowy March day in 2012, Oliver Morton, a British science writer and Economist editor, sat in a University of Calgary conference hall and listened to the two questions that came to frame the contents of his new book, The Planet Remade: How Geoengineering Could Change the World. Ask yourself this, said Princeton physicist Richard Socolow: Do you believe the risks of climate change merit serious actions aimed at mitigating them, and do you think that reducing human-generated carbon-dioxide emissions to near zero is very hard?

Morton, who answered yes and yes, soon realized the consequence of that dual affirmation. If carbon emissions bring the risk of climate catastrophe and little can be done about them in time, then—for reasons as much moral as practical—geoengineering had to be considered. The term broadly encompasses the use of science and technology on a massive scale to bend Earth’s climate to human ends. Its champions have suggested, and even—in the case of American entrepreneur Russ George, who dumped 100 tonnes of iron sulphate into the Pacific off Haida Gwaii in 2012—experimented with ideas ranging from feeding iron to ocean plankton (to encourage them to absorb more carbon) to giant mirrors in space or atmospheric veiling to reflect sunlight away from the planet.

Climate change skeptics, naturally, are not interested in what geoengineering might accomplish, and oppose it for its usually astronomical costs. Among environmentalists, rejection is more visceral—Al Gore has called it “delusional in the extreme”—because tinkering with the Earth’s natural systems is simply more of the hubris that brought us to the brink of disaster in the first place.

Morton sympathizes with the green side, but he thinks they are far too optimistic about cutting emissions. In 2013 humans burned three trillion cubic metres of gas over the year, three million barrels of oil monthly and 300 tonnes of coal every second. How fast can that possibly change? Bring a new nuclear power plant on stream every week, and it would take 20 years to replace the coal-fired plants; replacing the coal output with power from solar panels would take 150 years at current installation rates. And the oil and gas would still burn.

The real moral issue—the true reason geoengineering has to be considered, according to Morton—is the plight of the global poor. There are seven billion humans now, many of them still in grinding poverty; there will be two or three billion more before the population curve turns downward. A world that aims, as it should, “to support nine billion in comparative comfort will need a great deal of energy. The idea you can reduce carbon emissions suddenly, in a way that’s politically feasible and economically non-disastrous—no.” Nor would fast action bring fast results. “Emissions reduction is the absolutely necessary answer to people suffering in the future, but it won’t make any difference for people suffering over the next couple of decades.”

That doesn’t mean he’s beating the drum for most geoengineering proposals. They essentially break down into two sorts. The first is carbon capture, removing CO2 from the atmosphere, an approach Morton finds ineffectual because the projects so far either pull out too little CO2 or emit too much. The second approach is to live with the carbon until emissions are driven down by renewables and nuclear power, while countering its greenhouse effect by blocking sunlight.

Morton finds the mirrors-in-space idea so prohibitively expensive that he disposes of it in a few sentences, and holds up atmospheric veiling as the sole serious possibility. It’s not a new idea—Canadian scientist and Harvard professor David Keith, a major figure in The Planet Remade, first wrote about it in 1992—partly since scientists know veiling’s cooling power from studying the aftermath of large volcanic eruptions. “Using aircraft to put a very thin veil of sulphur aerosols, finer than dust, across the stratosphere would diminish, just a bit, the amount of sunlight that reaches the Earth’s surface,” says Morton. It might be the most effective means of averting disaster until we move off fossil fuels.

Or it might not. If Morton has a single point he returns to over and over, it’s that we don’t know. We need to start thinking about geoengineering, and in a clear-eyed way. Do not contrast a geoengineered Earth with a natural Earth, Morton urges, because that “natural” planet grows more mythic by the day. The real point of comparison is between what we are haphazardly creating—a greenhouse Earth—and a geoengineered planet. “Any decisions we make will be made under fairly radical conditions of uncertainty, because we don’t fully understand the risks of either,” concludes Morton. “But our future options are a lot more constrained if you rule out geoengineering from the get-go.”