It takes T. rex to tango: Why the dinosaurs danced

Research suggests that dinosaurs deployed some fancy footwork to woo one another, highlighting their relationship to modern-day birds 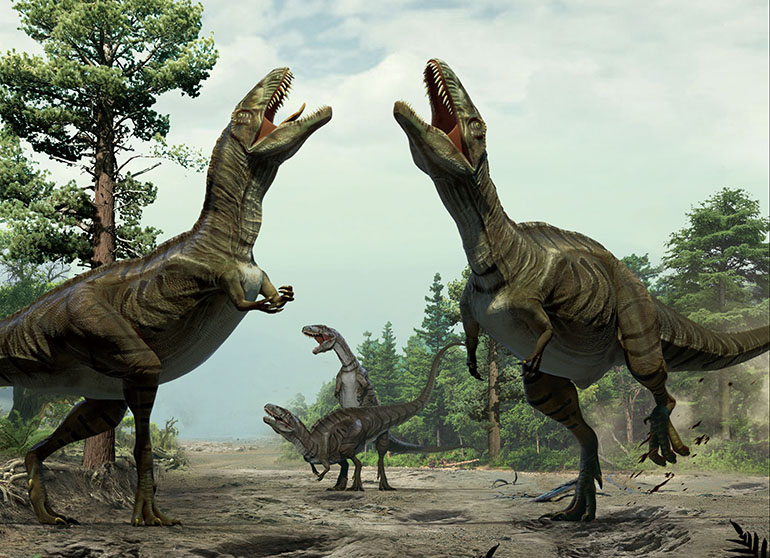 We don’t typically think of big, meat-eating dinosaurs as light on their feet—yet research suggests they performed mating dances to woo one another, like modern-day birds. In a 2015 study, Martin Lockley, professor of geology at the University of Colorado at Denver and an expert in dinosaur footprints, examined fossilized foot scrapes preserved in Colorado sandstone, and concluded that these were left behind after a theropod mating ritual. It’s just further proof of how birdlike these iconic creatures really were.

Scrape marks, some five or six feet long, and made by left and right dinosaur feet, were discovered at four Colorado sites that date back to the Cretaceous period, which ended some 65 million years ago. The largest site features 60 scrapes on a single sandstone surface that measures 50 m long, and 15 m wide. (A few show outlines of three-toed footprints.) After exploring several other hypotheses—such as whether these markings were left by dinosaurs digging for food and water, or marking their turf—Lockley and his co-authors concluded that these scrapes were made during a dinosaur mating ritual. It’s a behaviour well-known in birds, like the Atlantic puffin, who energetically kicks and scratches to catch the attention of a mate.

Lockley believes these scrapes may have been left by a meat-eater called Acrocanthosaurus, but Tyrannosaurus rex, another theropod, might have been a dancer, too. “There’s no reason to suppose that T. rex [would] not have engaged in that same behaviour,” Lockley says, adding that we’ve yet to find proof of it. One can only imagine the vocalizations that accompanied these mating dances. “It’s hard to imagine such big animals getting all steamed up,” says Lockley, “and staying mute.”

Related: The quest to bring dinosaurs back to life

Dinosaur mating rituals have largely been a mystery up to now, because they’re nearly impossible to preserve in the fossil record, says University of Edinburgh paleontologist Stephen Brusatte, who wasn’t involved in this study. We do know a bit about how some dinosaurs raised their babies. “Duck-billed dinosaurs had nesting grounds they’d go back to, year after year,” Brusatte says. “Even some meat-eaters [like Oviraptors] were good parents,” who diligently guarded their eggs. (Dinosaur dads were involved in egg-guarding too, which they have in common with male ostriches, he says.) Scientists know very little about T. rex‘s parenting style. “It’s a big mystery,” says Brusatte, author of the forthcoming book The Rise and Fall of the Dinosaurs. Scientists have yet to find a T. rex nest, an egg, “even a little egg shell.”

The childhood fantasy of a giant, reptilian T. rex hasn’t entirely disappeared: one was last seen rampaging through the 2015 blockbuster Jurassic World. There’s a growing understanding that these creatures had far more in common with birds than we once appreciated. The first feathered dinosaurs were found in China in 1996, says Lockley, whose father was coincidentally an ornithologist. Moreover, T. rex was probably feathered. “Birds evolved from dinosaurs. That’s a scientific fact,” Brusatte says. Just because they have a lot in common with birds, doesn’t mean they’re not impressive creatures. “If you saw a living T. rex, you wouldn’t think it was some kind of monstrous, overgrown crocodile. You’d think it was some kind of killer big bird.” One with fearsome dance moves.

Related: How much do you really know about dinosaurs? Take our quiz.