The James Webb telescope is allowing astronomers to time-travel into our deep, dark past 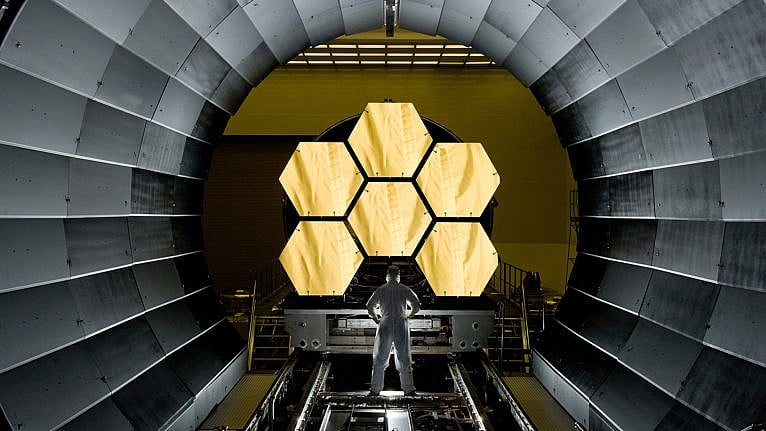 Far off in space, in the middle of the Sword of Orion, just below the mythical hunter’s belt, is a hot and violent nebula swathed in dust, where new stars are busy being born. And while the nebula itself has always been visible to the naked eye, the enigmas of the embryonic celestial bodies inside it, particularly those in a section known as the Orion Bar, were not. Until now.

The James Webb Space Telescope, with its knack for reading infrared wavelengths, will enable scientists to finally pierce these molecular dust clouds and glean far more information than they’ve ever had before. The Webb, which is the largest and most powerful space telescope ever built, was in development for nearly 25 years prior to its launch on Christmas Day of 2021—a collaboration between NASA and the European and Canadian Space Agencies. (And with a price tag of $12.5 billion, it’s also very expensive.)

The Webb’s initial explorations are a test run designed to help scientists gauge the telescope’s capabilities in a well-known area of space before they turn its gaze on ancient and beguiling mysteries. Probing the Orion Bar is one small part of that mission. The main event is the search for the primordial energy emitted when the universe was born roughly 13.7 billion years ago.

Many of those waves of energy will have travelled so far through our ever-expanding universe that, by the time they reach the Webb, they will have stretched. Once they’ve reached the infrared part of the electromagnetic spectrum, in a phenomenon known as redshifting, they become invisible to the naked human eye. The Webb telescope can reveal these long, infrared waves more clearly than any other device humans have yet invented.

For an astronomer, looking through the Webb is like entering a time machine. Chris Willott, an astronomer with the Herzberg Astronomy and Astrophysics Research Centre in Victoria, is the telescope’s project scientist for Canada. “When you stop and think about it, the light we’re detecting with our telescope actually left there long before the Earth was even around,” he says. “That’s kind of crazy to think about.”

MORE: A meteorite nearly killed this B.C. woman in her sleep. Scientists say it could be 470 million years old.

Now safely nestled 1.5 million kilometres from Earth in a region of space known as the second Lagrange point (or L2), the Webb is orbiting the sun while remaining in line with Earth. L2 is a sweet spot in the solar system that allows the telescope to use minimal energy to stay in place while remaining cold enough to take photographs with impeccable clarity. In late March, the Webb returned its first photo: a sharp image of a twinkling star 2,000 light years from Earth. It exceeded Team Webb’s expectations.

The telescope’s body, which features a primary mirror 6.5 metres across formed of 18 golden hexagons, is fitted with four instruments, including the Near-Infrared Imager and Slitless Spectrograph, or NIRISS, designed and built in Canada. Think of it like a camera that can capture many different infrared wavelengths in the same image. Willott has plans to point NIRISS at massive galaxy clusters at redshift half, which, in astronomy terms, is relatively close. For the uninitiated, the redshift number is a measurement of the time it has taken the light from an object to reach us.

Sarah Gallagher, an astrophysicist and science adviser to the president of the Canadian Space Agency, is keen to find out the galactic specs: how many, when did they form, and what did they look like? “Were they just disorganized blobs, or a bunch of clumps?” she asks. “Were there lots of teeny-tiny galaxies? Were there some big ones? We just don’t know. We have no information. This is going to be blown open by Webb.”

RELATED: Space exploration is about more than launching billionaires into orbit

Astrophysicists have long postulated that early galaxies were not like our disc-shaped Milky Way, with its beautiful spiral arms. Still, the Webb may provide some surprises. “People have ideas about what they think they’re going to see, but it might look quite different,” Gallagher says. “The universe does not let us down. It’s pretty cool stuff all the time.”

This article appears in print in the May 2022 issue of Maclean’s magazine with the headline, “Beyond infinity.” Subscribe to the monthly print magazine here.