Mars: When do we get to visit?

'We now have an imperative to send astrobiologists to Mars,' says John Grunsfeld administrator of NASA’s Science Mission Directorate 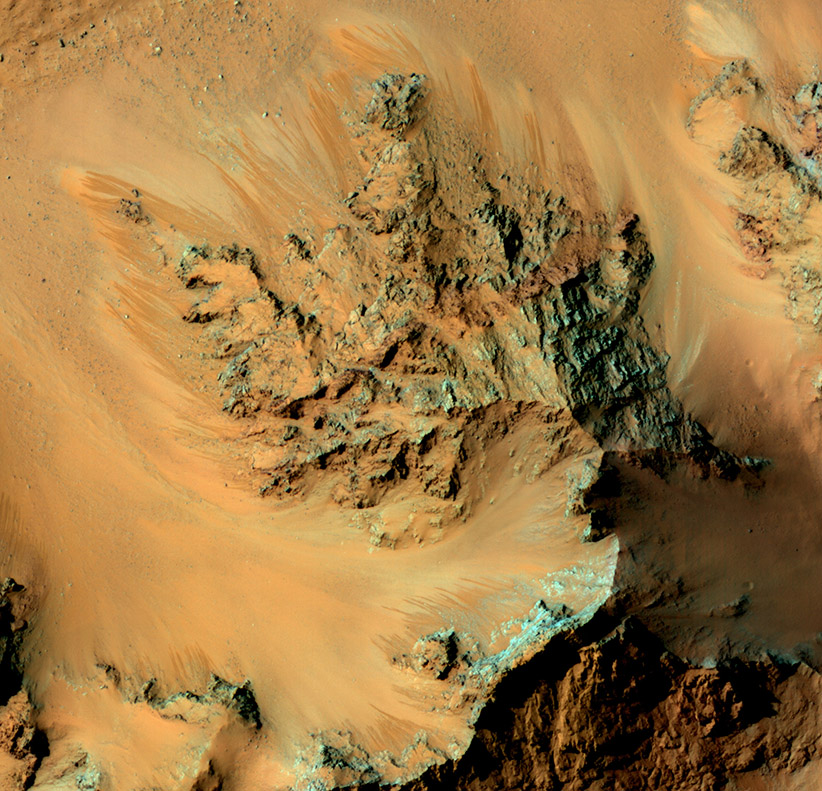 This image shows RSL extending downhill from bedrock cliffs, mostly towards the northwest (upper left). This image was acquired in middle summer when RSL are most active in the southern mid latitudes. (NASA/JPL/University of Arizona)

WASHINGTON – The immemorial question “Are we alone?” trickled closer to a possible negative answer Monday when the U.S. National Aeronautics and Space Administration announced—with triumphant, almost schoolboyish excitement—that high-resolution cameras and spectrometers aboard its Reconnaissance Orbiter had detected shallow, sandy, seasonal streams of highly salted water oozing down the mountainsides of Mars.

The discovery fixes the Red Planet as the second body in the solar system known to possess liquid water on its surface, though underground oceans are thought to be present on Jupiter’s moon Europa, on Saturn’s satellite Enceladus, and possibly on other extraterrestrial orbs. Scientists long have listed water as an essential precursor to life, extrapolating from the only known example: us.

On Mars, NASA scientists said at a news conference in Washington thousands of briny rivulets—each of them a metre or two wide and “several football fields long”—seep downward just below the planet’s pinkish surface. They darken the soil visibly during the 35° C-degrees-in-the-shade swelter of a Martian summer afternoon, then evaporate during the planet’s Antarctic night.

NASA officials admitted, however, that it will be at least a decade before the agency can dispatch Matt Damon to cast for trout in them.

More likely than game fish, NASA scientists postulated, would be alien microbes that, like their counterparts on our own Terra, could withstand the rarefied atmosphere and unearthly temperature variations of the Martian day and year.

“We find bacteria in some of the most hostile environments on Earth—even pools of radioactive water,” planetary science division director Jim Green told Maclean’s. “There are hundreds of solar systems that were formed at the same time and from the same materials as ours.

“We now have an imperative to send astrobiologists to Mars,” said John Grunsfeld, a five-time space shuttle astronaut and the current associate administrator of NASA’s Science Mission Directorate. “Mars once was a planet very much like Earth, with salty seas, freshwater lakes, and snow-capped peaks. If life started on Mars three billion years ago, just as it started on Earth, is any of it still alive today?”

So far, reporters were told, less than four per cent of the Martian surface has been analyzed in detail, leading to the possibility that more or larger areas of surface water may be awaiting discovery. Scientists ruled out dispatching the Curiosity rover, which has been skateboarding across Gale Crater since August 2012, toward the alpine watercourses, because it may have been so incompletely sterilized before liftoff from Cape Canaveral that any life it detected might actually be an earthly stowaway.

In any event, officials said, waterways have been detected only in some of Mars’s most vertiginous and inaccessible landscapes, making any future ground-based exploration, robotic or otherwise, hugely challenging.

Mary Beth Wilhelm of NASA’s Ames Research Center suggested that the seasonal streams—technically known as recurring slope lineae—could be used as a source of potable water for future missions of exploration and colonization. Grunsfeld went even further, hypothesizing that pressurized greenhouses could be erected—“hopefully in the 2020s”—in which to grow enough fresh produce to sustain a squadron of explorers.

Grunsfeld’s proposal comes only 103 years after Edgar Rice Burroughs outlined a nearly identical scenario in his science-fantasy novel, A Princess of Mars: “The water which supplies the farms of Mars is collected in immense underground reservoirs at either pole from the melting ice caps, and pumped through long conduits to the various populated centers . . . Instead of flooding the surface of the fields, and thus wasting immense quantities of water by evaporation, the precious liquid is carried underground through a vast network of small pipes directly to the roots of the vegetation. The crops upon Mars are always uniform, for there are no droughts, no rains, no high winds, and no insects, or destroying birds.”

“And now the cry ‘On to Mars!’ was heard on all sides,” Garrett Serviss wrote late in the 19th century, in his sci-fi novel, Edison’s Conquest of Mars. “But for such an enterprise, funds were needed—millions upon millions.”

Twelve decades later, with the Obama administration’s enthusiasm for human space travel a waning crescent, and with none of the myriad 2016 candidates from either party making “on to Mars” his or her rallying cry, NASA officials face titanic budgetary obstacles.

“It’s not Star Trek,” Green said. “It’s not ‘Boldly go where no one has gone before.’ We are anticipating many, many years before we could design a mission and experiments specifically to look at these areas.”

When human adventurers do reach the wet, red planet, they are likely to enjoy their sojourn for both culinary and aesthetic reasons, as outlined by Louis Pope Gratacap in 1903, in a book entitled The Certainty of a Future Life in Mars: “The Martian lives only on fruit, and he lives only a few degrees on either side of the equator . . . The business is largely agricultural, but in the cities the pursuit of knowledge still continues . . . It is a sphere of simplified needs and primal feelings.”