Everything about the tardigrade, or 'water bear,' sounds like a riddle 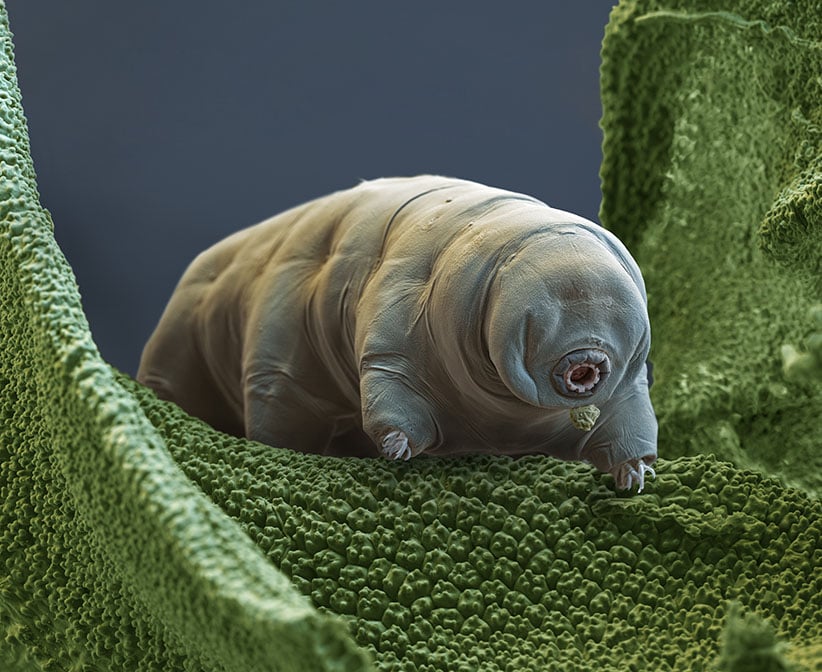 Everything about tardigrades sounds like a riddle: What creature can survive both freezing and boiling temperatures; you can’t see it, but it’s everywhere; it can survive outer space; and after being dried up for years, it can reanimate in water within a few minutes?

The answer is just as puzzling: tardigrades, which are also called “water bears” or “moss piglets,” are aquatic, microscopic invertebrates that have recently captivated evolutionary biologists and science enthusiasts alike for their unique ability to withstand extreme conditions. There is photographic evidence too that tardigrades are adorable.

Now, researchers at the University of North Carolina at Chapel Hill have found another reason to love the tardigrade—it’s a genetic marvel. After sequencing the tardigrade’s genome, the team discovered that a whopping 17.5 per cent is composed of foreign DNA. By comparison, the previous record-holder was a microscopic animal called the rotifier, which has half as much foreign DNA; most animals have less than one per cent.

The research, which was published this week in the Proceedings of the National Academy of Sciences, is significant because it demonstrates the potential prowess of “horizontal gene transfer”—the process by which genetic material is traded between unrelated species rather than through parental inheritance. The tardigrade’s genome includes DNA from plants, fungi and single-celled micro-organisms called Archaea.

The biologists suspect that when a tardigrade encounters a harsh environment, such as severe dryness, its DNA breaks into pieces; when the cell rehydrates, its membrane and nucleus become “leaky” and DNA from other species can enter it. As tardigrades fix their own DNA, they can incorporate foreign material too. “Animals that can survive extreme stresses may be particularly prone to acquiring foreign genes,” says Thomas Boothby, the study’s first author. Tardigrades may keep the best ones to enhance their survival.

As horizontal gene transfer becomes more understood, researchers are beginning to rethink the proverbial “tree of life” metaphor for how genes are swapped “vertically” from mother and father to child. “Instead we can think about the web of life and genetic material crossing from branch to branch,” says Boothby. “So it’s exciting. We’re just beginning to adjust our understanding of how evolution works.” And tardigrades are proving to be the perfect specimen.