Kaspi, one of the world's leading experts on neutron stars, will receive $1 million over five years for her work 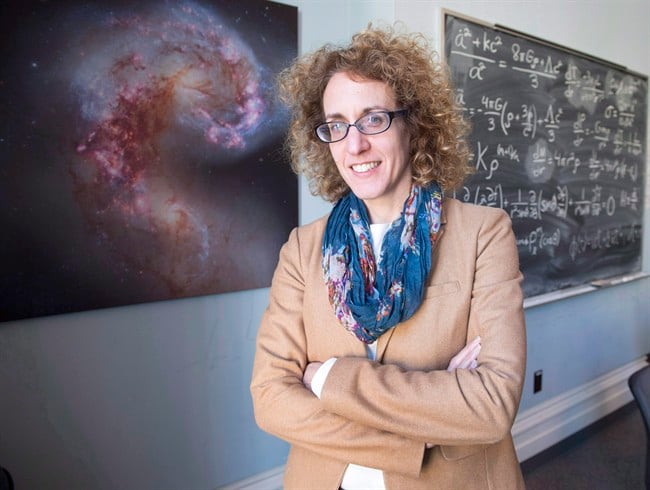 Victoria Kaspi, the director of the McGill University Space Institute, poses for a photo in Montreal on October 30, 2015. Kaspi will be officially handed the Gerhard Herzberg Canada Gold Medal for Science and Engineering by the Governor General in Ottawa Tuesday. (Ryan Remiorz/CP)

TORONTO – A McGill University astrophysicist became the first woman to receive one of the country’s top science prizes on Tuesday, marking what was called a “significant watershed moment” for women in science.

Victoria Kaspi, a Montreal-based professor, was handed the Gerhard Herzberg Canada Gold Medal for Science and Engineering in Ottawa, becoming the first woman to receive the award in its 25-year history.

“I am profoundly thrilled and humbled,” Kaspi said in a statement.

“It is truly overwhelming to think that I am in the same category as some of its previous recipients. I accept this award on behalf of my research group and all of the talented students, postdocs and collaborators who’ve played major roles in the research successes and discoveries that are being recognized with this honour.”

Related: Why there are still too few women in STEM

The medal, awarded by the Natural Sciences and Engineering Research Council, recognizes top researchers in the fields of natural sciences and engineering.

It means Kaspi, one of the world’s leading experts on neutron stars — the ancient remnants of the most massive stars in the Milky Way — will receive $1 million over five years for her work.

“It really does signal to girls and young women either entering science, contemplating entering science or in science that it is possible to achieve NSERC’s highest honour.”

Pinto noted that women are under-represented among scientists in general, with NSERC working to recruit and retain more women.

Still, he noted, only 27 per cent of the assistant professors funded by NSERC are women, while that number falls to 14 per cent when it comes to full professors supported by the council.

“There’s an attrition rate in moving up through the ranks,” Pinto said. “It certainly is an issue for us that we’re not using 50 per cent of the intelligence in Canada because women are under-represented. Especially at the higher ranks.”

While the causes for the low numbers are complex, Pinto cites woman being more self-critical of their abilities and hesitant to put themselves forward as readily as their male counterparts as factors.

In Kaspi’s case, however, Pinto noted that the 48-year-old is not only the first woman to win the Herzberg medal, but is also tied with one past winner as the youngest to take the prize.

“She’s made an impact at a very young age,” said Pinto. “It’s work that has had a tremendous impact in the field of astrophysics.”

Kaspi’s work, which employs the largest and most powerful radio and X-ray telescopes in the world, looks at how stars evolve and how they die, analyzing the nature of matter under extreme conditions.

The funding Kaspi will receive through the Herzberg prize will now allow her to pursue “very bold ideas” in her research, he said.

“She can focus on pushing the boundaries, be asking some more audacious questions and really probing things that have never been probed before,” he said, noting that a past Herzberg prize winner, Arthur McDonald, won a Nobel prize in physics last year.

“It certainly bodes well for the future.”