Nerds are literal, and other things we learned from TRAPPIST-1

Five thoughts on the discovery of seven potentially habitable Earth-size planets around a single sun known as TRAPPIST-1:

1. The star is classified as an “ultra-cool dwarf,” which makes it all the more perplexing that NASA declined to name the system DINKLAGE-1. Then again, scientists are notoriously terrible at naming things. One of the devices used to confirm the existence of these distant planets is formally known as the Very Large Telescope. Nerds are so literal. If they were in charge of naming important U.S. landmarks, countless tourists would spend their summer vacations traveling to South Dakota to see Mount Four Faces.

2. How excited are we really supposed to get about this discovery? These planets are 235 trillion miles away. That distance is almost impossible to comprehend, so let’s try thinking of it in different terms. Let’s say you are the person who most wants to leave this world behind. There’s nothing left for you here but heartache and regret. Even with the fastest rocket known to humankind, you will still die long before you escape the fact that you lost an election to Donald Trump.

3. Speaking of whom: People tend to worry about the risk of President Trump starting a nuclear war. This, in turn, means we don’t spend enough time worrying about the risk of Trump starting an interstellar war. Can you imagine if aliens make contact during the current U.S. administration? The President’s first instinct would be to base his entire re-election campaign on building a giant dome over America. “Folks, we’re going to build the dome, and it’s going to be a real dome, and it’s going to be a great dome. It’s the only way to stop the mutant insect hordes of Kepler-62e from taking good American landscaping jobs.”

4. Later, of course, Trump would almost certainly strike some shady alliance like the one he’s got with Putin. “I personally think it would be great if Earth and Kepler-62e got along. The mainstream media won’t tell you this – but on most of the continents that Insect Emperor Fnnnrk has enslaved so far, he’s barely doing any human organ harvesting!” 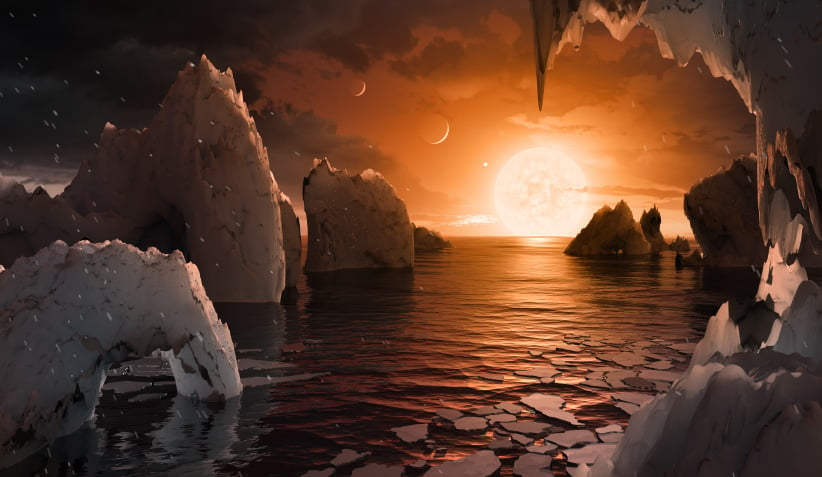 This illustration shows the possible surface of TRAPPIST-1f, one of the newly discovered planets in the TRAPPIST-1 system. Scientists using the Spitzer Space Telescope and ground-based telescopes have discovered that there are seven Earth-size planets in the system. (NASA/JPL-Caltech)

5. Did you get a load of the illustration that NASA released to help us imagine the distant solar system? The space agency’s dreamy artwork never lets us down. This time, they manage to make the surface of TRAPPIST-1f look like a cross between a Successories inspirational poster and the kind of album cover that Pink Floyd would have chosen if everyone in the band had played the pan flute. According to NASA, a scientific organization dedicated to facts, the illustration shows “the possible surface” of one of the distant planets. Try fact-checking that one, New York Times! PROVE US WRONG.

Obviously, the agency puts out silly stuff like this because it helps to ensure their findings get better media coverage, which comes in handy when it’s time to ask Congress for $73 billion to develop new flavours of Tang. Still, it’s worth imagining the meeting at which the artist first presented his vision of this distant world:

Artist: “I tried to follow your instructions and make it look as much as possible like the backdrop to an off-off-Broadway show about a flamboyantly gay porpoise. What do you think?”