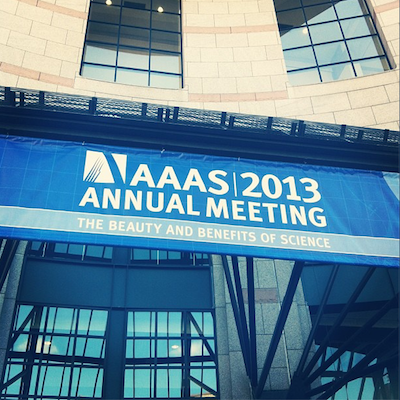 As I landed in Boston bright and early this morning, and hopped on the subway to the Hynes Convention Center (host of this year’s meeting), I was gripped by a familiar feeling—one I remember from covering this event last year, too—the fear of missing out. The AAAS is the world’s biggest general scientific society, and their annual meeting is a scientific smorgasbord. Over the next few days, thousands of researchers, journalists, engineers, teachers and policy-makers will be here to talk about their work. The program is as thick as a paperback novel. How to attend all the sessions that have already caught my eye?

There are a few I know I’ll be attending: like one on exploring other worlds, and what they can teach us about our own; and another on brain-machine interfaces. There’s a talk on whale evolution, and another on China’s feathered dinosaurs—especially interesting given the newly discovered Yutyrannus huali, a massive feathered cousin of T. rex. (As we now know, feathered dinosaurs weren’t just in China; last year, Canadian paleontologists found them in Alberta, the first time we’ve seen such a thing in the Americas.) Another session, on science at the International Space Station, should be interesting given that Canada’s own Chris Hadfield is about to take command. And, of course, the Higgs boson, the so-called “God particle,” makes an appearance on my list, too.

It’ll be an exciting few days in Boston, soaking up some of the biggest ideas in science. Follow me @katelunau and check back at Maclean’s for the latest.