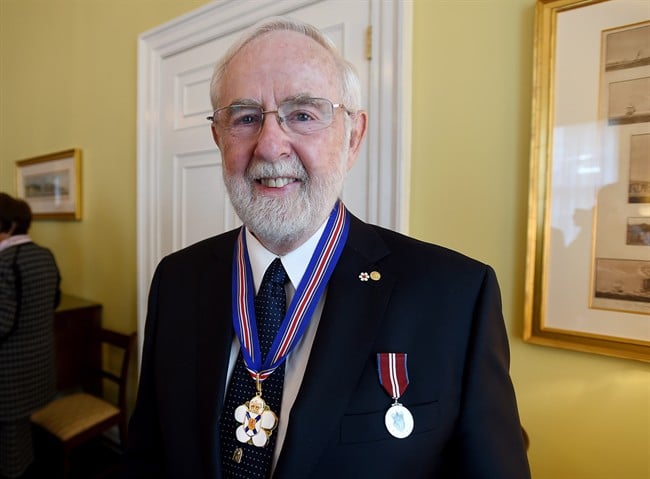 Arthur McDonald, a native of Sydney, N.S. who won the 2015 Nobel Prize in Physics, is awarded the Order of Nova Scotia at Province House in Halifax on Wednesday, Oct. 12, 2016. THE CANADIAN PRESS/Andrew Vaughan

HALIFAX – Having helped rewrite the basic laws of physics, Canadian scientist Arthur McDonald has moved on to one of the universe’s biggest mysteries.

Awarded a Nobel physics prize last year for his pioneering work on the changing “flavour” of neutrinos, the 73-year-old astrophysicist from Cape Breton was one of five people awarded the Order of Nova Scotia Wednesday.

While he was happy to talk about neutrinos, his enthusiasm for cosmic puzzles has clearly shifted to an international bid to observe and measure something ominously referred to as dark matter.

“It’s not made of anything that we have every observed in an experiment here on Earth,” McDonald said after the ceremony in the provincial legislature’s ornate Red Chamber. “Hence, the excitement in trying to understand it.”

MORE: Arthur McDonald on how to win a Nobel Prize

It isn’t easy to describe dark matter. So far, its existence has been only inferred by its gravitational effects on stars and galaxies.

He is part of the so-called DEAP Collaboration, a group of over 60 researchers from 10 institutions in Canada, the U.K. and Mexico that has developed the DEAP-3600 — a highly sensitive instrument designed to detect dark matter.

The detector is buried under two kilometres of rock at an underground laboratory in Northern Ontario, known as the SNOLAB, an expansion of the Sudbury Neutrino Observatory.

It was at the observatory — located at the bottom of a former mine — that McDonald and his team probed the properties of neutrinos, subatomic particles that can’t be studied unless other cosmic rays are blocked by solid rock.

McDonald and Japanese scientist Takaaki Kajita discovered that neutrinos oscillate. That helped them conclude that neutrinos have mass, which fundamentally changed the understanding of the laws of physics.

“The neutrinos were changing and that was the puzzle that we solved,” said McDonald, a professor emeritus at Queen’s University in Kingston, Ont.

The discovery has helped scientists gain a more accurate understanding of the awesome power of the fusion reactions in the core of the sun.

“That means we understand how the sun burns … We just have to figure out how to confine it. It’s like trying to have the sun in a bottle.”

Meanwhile, the dark matter experiment has been years in the making. And McDonald says he’s thrilled to be on the cutting edge once again.

“It’s always fun when you’re in a situation where the special environment you have gives you an opportunity to do something that would otherwise be impossible,” he said.

Aside from the dark matter project, McDonald is also a member of a federally appointed panel drafting recommendations for improving how fundamental science is funded in Canada. As well, he’s been on an extensive speaking tour since the Nobel win. And he’s travelled widely to thank the more than 270 faculty researchers and students who worked on the neutrino experiments.

“We were all able to have a eureka moment together in 2002 when we realized that we had shown without a shadow of a doubt that neutrinos do change from one type to another — from one flavour to another,” he said.

The Order of Nova Scotia was also awarded Wednesday to Prof. Francoise Baylis, a Halifax-based expert in bioethics who teaches at Dalhousie University, and Doug Knockwood of Indian Brook, a Mi’kmaq elder who survived residential schooling, homelessness and alcoholism to become a spiritual leader for his people.

Another winner was Jim Morrow, artistic director of Mermaid Theatre in Windsor, whose larger-than-life puppets have thrilled audiences around the world.

Donald Reid of Joggins was invested into the order for his lifelong work collecting fossils along the now-famous cliffs near his home. His collection — 70 years in the making — represents the world’s most complete fossil record of terrestrial life of the Coal Age, dating back 300 million years.