As a mysterious flying object exits our solar system, we asked experts to speculate on its origins 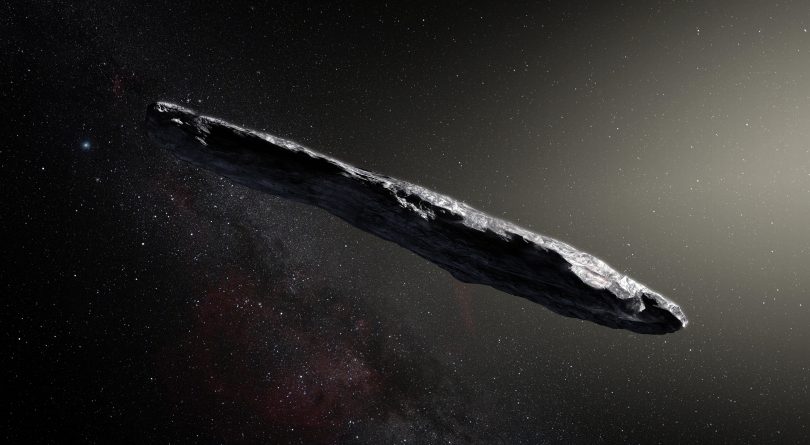 Last year, astronomers spotted an unusual interstellar object moving through the solar system at the breezy pace of 26 km per second.

Named ‘Oumuamua—from the Hawaiian for “scout”—various theories emerged as to what it could be. A comet was the first thought, but it lacked the trademark gaseous tail. Then it was posited to be an asteroid, but it began to accelerate at a pace that scientists were unable to explain.

This month, a pair of Harvard scientists published a paper suggesting that the object might be an abandoned alien spacecraft pushed forward by a “solar sail”—a device using energy from the sun to propel the vessel through space. In January 2019, it will travel beyond Saturn’s orbit on its way out of our solar system. In the interest of scientific rigour, Maclean’s has rounded up the hottest takes from Canada’s leading experts on what they believe ‘Oumuamua might be.

It is a small asteroid ejected (probably billions of years ago) from another planetary system, that has by chance flown close to our star and the Earth. Trillions of objects must be freely wandering interstellar space, and every now and then one falls through a stellar system (ours, in this case). This object’s flyby properties—its speed and direction—are exactly what was expected for such freely wandering objects.

In my opinion, ‘Oumuamua is most probably an atypically shaped, slightly icy “planetesimal” that was ejected from another solar system long ago. A planetesimal is any space rock that is left over from the process of planet formation, such as asteroids or comets. Now, something needs to explain ‘Oumuamua’s excess acceleration, as is the focus of the Harvard paper. The solar sail theory is a fun piece of science, and there is nothing from what I can see that is incorrect in the calculations. Light carries momentum and does indeed provide pressure that can push a thin sheet. Can ‘Oumuamua’s acceleration be explained by radiation pressure? We now know it can. But is it likely an alien light sail? That is an extreme leap. Extraordinary claims require extraordinary evidence, and the Harvard paper does not provide any evidence to prove that ‘Oumuamua is artificial in origin.

Science fiction has a long history of stories about malfunctioning spaceships or derelicts; if this is an alien vessel, it’s probably precisely that: a derelict, since in a functioning vessel, any solar sail—a fragile construct—would be retracted this far from a star. How tragic it would be if aliens had indeed decided to pay us a friendly visit only for them to have died en route. My own theory? Actually, science-fiction writers are a highly skeptical bunch; we’re the least likely to take an outlandish interpretation to heart. Almost certainly, ‘Oumuamua will turn out to be an entirely natural phenomenon. Still, anything that gets people thinking about our place in the universe is all to the good.

The most reasonable explanation is that this object is a small body (like an asteroid) that was ejected from another planetary system, and that our solar system intersected with its path, causing the object to become visible from Earth. Astronomers and planetary scientists have long predicted such objects would exist and that we would detect them when our telescopes became capable enough. The proof will come when additional such bodies are discovered. When planetary systems form, many billions of bodies about the size of this one would be created. We already know that dust particles from other planetary systems impact the Earth; ‘Oumuamua is a very large example of such an event, but not a highly unlikely event.