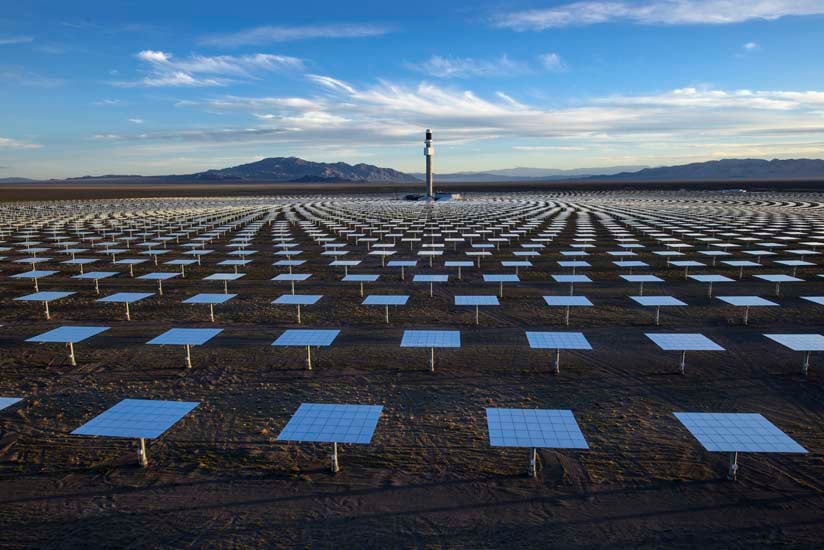 To a photographer standing on the ground, the solar power plants that cover hundreds of acres of California or Nevada desert appear to stretch into the horizon. The units are larger than pick-up trucks, and there are thousands of them on some project sites.

So to capture the boundaries of the plants, Jamey Stillings had to hire a helicopter. He carefully scheduled each flight to catch a 20-minute window of ideal light, often at 4:30 a.m., always asking the pilot to remove one of the doors. From as high as 2,000 m in the air, he leaned to the edge of the aircraft and snapped pictures of the projects below. “We spend much of our lives with our sources of energy invisible to us,” he says. “The photos are about becoming conscious.”

In a series called Changing Perspectives on Renewable Energy Development, Stillings is photographing the most significant renewable energy projects on every continent. Since he began to document solar power plants six years ago, he has come to recognize that they garner both light and dark responses. “Many urban-minded people think, ‘Wow! Those are fantastic projects for useless deserts!’ ” he says. “Others who are more tuned into the desert and its species feel a sense of melancholy.”

Stillings’s extraordinary photographs of solar power plants have been displayed in museums across North America and Europe, and have been acquired by the United States Library of Congress. His images of the Ivanpah Solar Electric Generating System in the Mojave Desert, the largest project of its type in the world, will be published as a monograph this fall. Stillings lives in Santa Fe, N.M., in a solar-powered home.

Stillings’s new book, The Evolution of Ivanpah Solar, will launch in North America on Nov. 24.