From 2014: The 4,000-km migration of sockeye salmon to their Adams River birthplace is the most extraordinary migration in the natural world 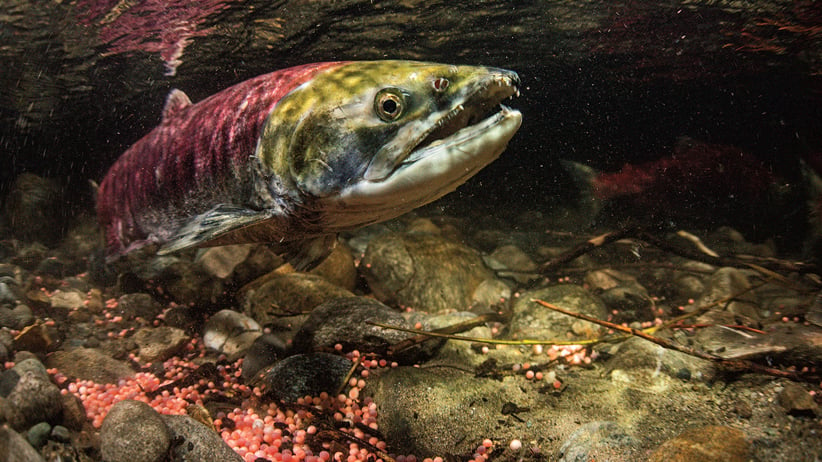 Sockeye salmon (Oncorhynchus nerka) eggs on the floor of the Adams River. Sockeye salmon migrate to their natal river or stream in the Fraser River watershed, which has one of the largest sockeye runs in the world. As they approach their spawning grounds, the bodies of the once silver fish turn bright red and their heads become green. Males develop a hump and hooked jaws, which play a role in competition and establishing hierarchies. Shortly after laying and fertilizing eggs, the salmon die, contributing to the ecosystem. Photograph by Paul Colangelo.

Once every four years, millions of sockeye salmon suddenly return home, to the Adams River outside Kamloops, B.C. Over a few weeks in fall, the Adams turns a deep crimson, in one of the world’s greatest natural wonders, as the fish flood the river and its tributaries—where they hatched four years earlier—to spawn, then die.

The 4,000-km journey undertaken by the salmon is the most extraordinary migration in the natural world. Yet scientists understand next to nothing about it. How do salmon navigate the open ocean, a difficult task even with GPS? How, after years at sea, can they identify the stream of their birth, from thousands of options? How exactly do they find their way home, to within feet of their birth? How do they change colour, transforming from a brackish green at sea, to a deep crimson as they navigate upstream? And why are they disappearing by the million every single spring, in a mass die-off that could foretell the end of this magnificent creature?

What is known, however, is that British Columbia’s enigmatic fish are wholly responsible for the gigantism we associate with the province’s towering rainforests. Salmon are the reason the province’s grizzly bears, who gorge on the fatty fish ahead of their long, winter nap, often top 1,000 lb. The salmon carry nitrogen into the forests, fertilizing the surrounding trees and allowing B.C.’s Sitka spruce to reach more than 20 storeys into the sky. Salmon’s effect on trees is so dramatic that scientists can tell how well a salmon run is doing simply by looking at the surrounding forest.

Given the fundamental importance of this keystone species—to B.C.’s trees, eagles, wolves, and to coastal First Nations, for whom the fish remains a vital food source and iconic cultural symbol—it is astonishing how we treat the fish and its natural environment. This year, six million pink salmon were taken out of the fishing area surrounding the tiny village of Harley Bay, on B.C.’s central coast. A few years earlier, it was 10 million. Ten millions pinks laid out head to tail would cover a distance of 6,000 km, says conservationist Ian McAllister.

The 2014 large sockeye run, in fact, served to mask a harsh reality: salmon runs have generally gone quiet in recent years, tapering dramatically. Already, scientists have begun noting the effect in B.C.’s bear and killer whale populations. B.C.’s southern resident killer whales can only feed on salmon; they are unable to adapt their diets. When salmon runs are not plentiful, the whales starve.

Even in the absence of human-caused mortality, a salmon’s life cycle is a gauntlet of variables and challenges, says McAllister. They spend their lives at sea, so when they begin migrating upstream in freshwater, they stop eating and drinking, growing weaker and weaker. Still, the fish are somehow able to power their way against strong currents, leaping up waterfalls and human-created obstacles, like dams and fish ladders. By the time salmon near their journey’s end, they can barely move. Yet even then, the females hold out, inching their way forward, searching for the perfect patch of gravel, where their eggs will be protected, and will have a better chance at not being washed downstream. Of the 5,000 fish who begin this impossible journey, just 2,000 will actually survive.

Their incredible struggle between life and death speaks to us in ways that we’ve lost, says Jeremy Heighton of the Adams River Salmon Society. “As a society we’ve become urbanized. We live in high rises. We’re isolated from one another. We’ve lost our connections to nature.” Salmon’s wondrous story of survival against all odds reminds us of the power and the challenges of living in nature. It humbles us.

Click here to witness the salmon run on video.