Photos: A day in the life of Pluto

NASA releases series of close-ups of the frosty, faraway world 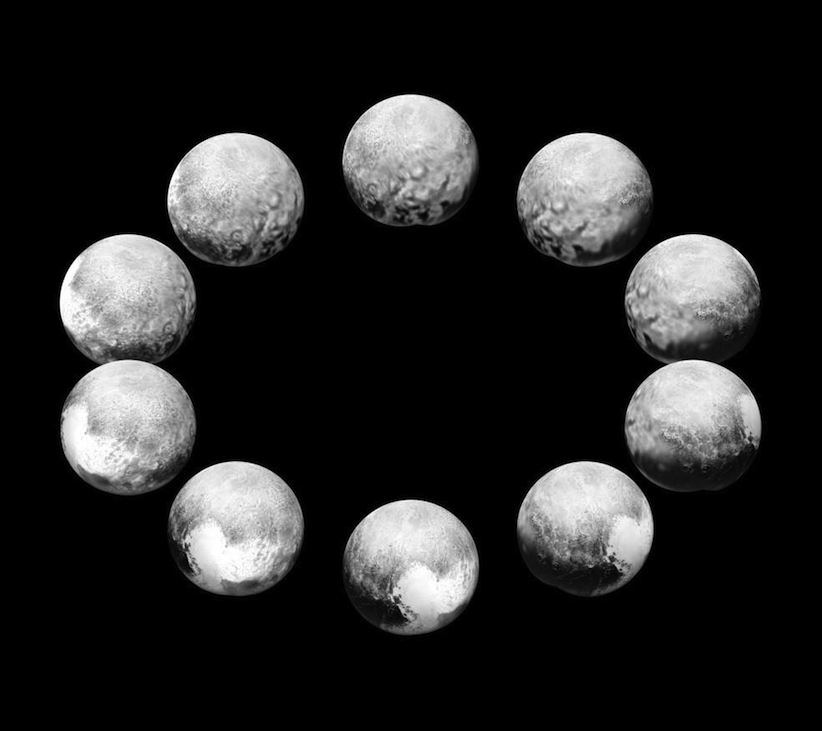 The space agency released a series of 10 close-ups of the frosty, faraway world Friday, representing one full rotation, or Pluto day. A Pluto day is equivalent to 6.4 Earth days.

The New Horizons spacecraft snapped the pictures as it zoomed past Pluto in an unprecedented flyby in July. Pluto was between 400,000 and 5 million miles from the camera for these photos.

A similar series of shots were taken of Pluto’s jumbo moon, Charon. But the Pluto pictures stand out much more because of the orb’s distinct heart-shaped region. Scientists call the heart Tombaugh Regio, after the U.S. astronomer who discovered Pluto in 1930.

New Horizons is now headed to a new target.

NASA on its newest Pluto pictures

“Pluto’s day is 6.4 Earth days long. The images were taken by the Long Range Reconnaissance Imager (LORRI) and the Ralph/Multispectral Visible Imaging Camera as the distance between New Horizons and Pluto decreased from 5 million miles (8 million kilometers) on July 7 to 400,000 miles (about 645,000 kilometers) on July 13. The more distant images contribute to the view at the 3 o’clock position, with the top of the heart-shaped, informally named Tombaugh Regio slipping out of view, giving way to the side of Pluto that was facing away from New Horizons during closest approach on July 14.  The side New Horizons saw in most detail – what the mission team calls the “encounter hemisphere” – is at the 6 o’clock position.”