Dafydd 'Dave' Williams on new post-space perspectives, part of our series in conversation with Canadian astronauts 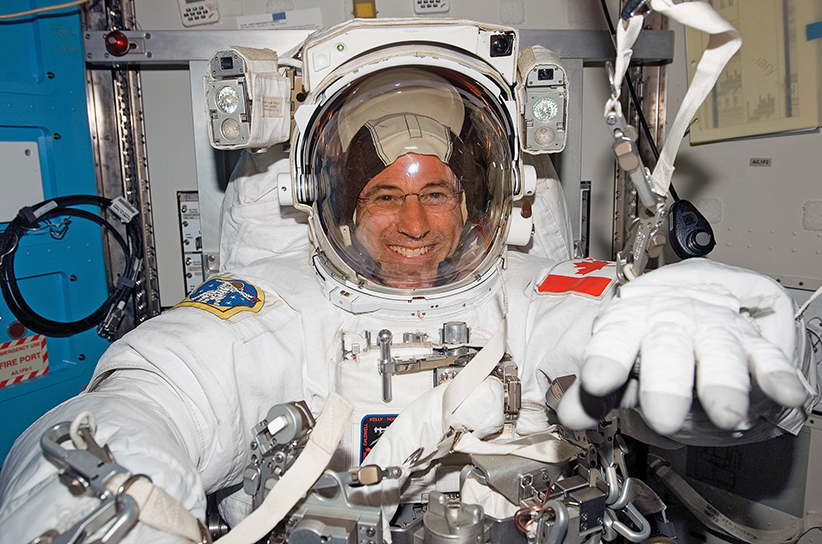 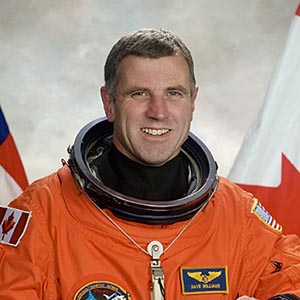 Q: What scared you most about being in space?

A: There are always lots of moments that get your attention. In my last space flight, on the third space walk, Clay Anderson and I were outside doing a space walk and the space station alarm went off. “OK, well, I guess we’ll [find out] if there’s a real fire or not.” We kept going, doing all the tasks associated with the space walk. It turned out to be a false alarm, but that certainly gets your attention.

On my first space walk, I was working on the extreme starboard side of the space station and I had to do something a little unusual—a tethered egress. Your feet are always in foot restraints, but on this space walk, my footrest had to be positioned so I was pointed straight out into space. So I had no handrail to grab to help me get out of my footrest. The only thing I could do was to grab my tether and pull so my feet were against the footrest, kick out of the heel restraints, float freely in space and turn around and pull myself back toward the S5 segment of the space station. And you know what? The view was incredible!

Q: Did you think you were going to float away?

A: Well, you wonder if you’re going to have one of those Gravity moments, but you’re always tethered. In the absence of gravity, you have to be very controlled in your movements, because otherwise you’re bouncing all over the place.

Q: It didn’t scare you off future space walks?

A: No. The first space walk, it’s really got your attention. You know you’re travelling eight times faster than a rifle bullet, and you’re outside. Second space walk, you’re a lot more relaxed, you’re looking over your shoulder, admiring the view of Earth. What was funny about our third space walk was that mission control in Houston called us and said, “Take a moment and enjoy the view.” We were over the Gulf of Mexico, and 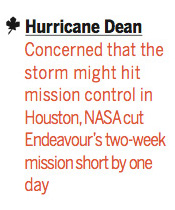 was in the gulf. So Clay Anderson and I—this is after the false alarm—pushed away from the space station. We were floating freely in space looking down at Hurricane Dean through the eye of the storm, and that was absolutely incredible.

Q: Did seeing the Earth from above change the way you look at the Earth?

A: On my second space walk, I was riding the Canadarm, heading down toward the payload bay of the space shuttle, and I could see the space shuttle highlighted against the Earth in the background, and there was this black, infinite, hostile void of space. I remember looking down at the Earth and thinking, “Beneath me is a 4½-billion-year-old planet, upon which the entire history of the human species has taken place.” That was an incredibly humbling moment, and I had a bit of an epiphany. As a physician, we learn a lot about palliative care, and when I was at McGill medical school, there was a writer, Ted Rosenthal, who used to write for the New York Times—tragically he died of leukemia at a very young age. He talked about how we can have an opportunity to live a lifetime in a moment, in a day, in a month, in a year—when you’re confronted with the finite reality of your own existence, all these moments become lifetimes. And I tell you, looking at the Earth from the end of the Canadarm at that moment, I lived a lifetime, and I truly understood what Ted was talking about. I remember thinking to myself, “This is so beautiful, someone should take a picture.” And I had a camera with me, so I reached down and took a picture, and it’s actually the front cover of a book called Wings in Orbit. 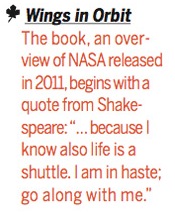 Q: What would you like Canada’s legacy to be in the space science world?

A: One of the things that’s really exciting from my perspective is that Canada is one of the major spacefaring nations. And I think we recognize that—the international program couldn’t have built the ISS if it were not for the Canadarm. We couldn’t have repaired the Hubble Space Telescope if it were not for the Canadarm. The list of our achievements is profound and significant, and it’s not just in robotics, it’s also in the life-sciences research experiments that take place on board and other space-science experiments. We’re well known as researchers, we’re well known for our expertise in robotics, and I’d love to see Canada go from being a major spacefaring nation in low-Earth-orbit missions to those beyond, making sure we’re part of those missions to Mars—not just from a technology perspective, but sending humans into beyond-Earth orbit.

Q: How do you think going into space changed you?

A: There are so many ways to answer that question. Overall, it’s a sense of perspective. What space brings to you is that global perspective, that planetary perspective, that we’re all in this together, and no matter where you’re living on Earth, we’re all part of this amazing journey. There’s a movie I really love called One Day. It was filmed on Oct. 10, 2010, and it’s a day in the life of the planet. That movie, to me, is a metaphor for what you experience when you’re in space; you see all the different aspects of our planet, how small the planet really is and how important it is for all of us to begin to understand the broader issues confronting us.