Rise of the biohackers

As fears of gene-editing technologies in the hands of amateur scientists grow, we should focus on genuine risks and not overreact to speculative threats 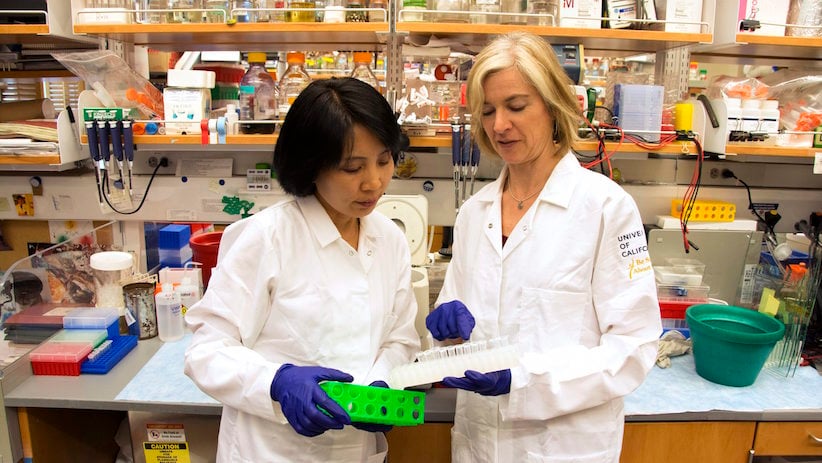 Jennifer Doudna, right, and her lab manager, Kai Hong, work in her laboratory in Berkeley, Calif. in 2015. Doudna was a leading developer of the gene-editing technique CRISPR-cas9 (Cailey Cotner/UC Berkeley via AP)

In her MaddAddam trilogy, Margaret Atwood envisions an anarchic dystopia populated by genetically engineered hybrid animals and modified humans. It warns of a terrible and dangerous future that could emerge when ethical imagination fails to keep pace with the risks posed by emerging, unregulated technologies, especially when rogue scientists work clandestinely with little modesty about what they can and cannot control. With Do-It-Yourself (DIY) gene-editing kits becoming more affordable and basement genetics labs proliferating, Atwood’s warning seems more prescient than ever. But as fears of gene-editing technologies in the hands of amateur scientists grow, it’s important to focus on genuine risks and not overreact to speculative threats.

The recent emergence of the genome editing technology CRISPR-Cas9 is a key development in the rise of DIY gene-editing. While genetic-engineering is not new, CRISPR-Cas9 offers a more precise and efficient alternative to existing methods. For a few hundred dollars, amateur scientists can purchase CRISPR-Cas9 starter kits online and set up gene-editing labs at home. For a few hundred more, DIY gene-editors can order customized DNA sequences to insert into bacteria and other organisms using their CRISPR kits.

Unlike research conducted in university and government facilities, amateur scientists can execute experiments without having to face formal ethics evaluations or health and safety inspections. In the absence of oversight, some fear that careless biohackers might develop and accidentally release killer pathogens with devastating consequences for plant and animal life, or make irresponsible decisions about which genes to tamper with and for what purposes. More concerning is the possibility of new forms of bioterrorism. In a report to the United States Senate, for example, former U.S. Director of National Intelligence, James Clapper, identified gene editing as one of six threats posed by “weapons of mass destruction and proliferation.”

In light of these concerns, some countries are treating the DIY gene-editing movement as a risk that must be addressed through criminal sanctions. Germany, for example, has made it a criminal offence to do genetic engineering outside a licensed facility, such as a university or community laboratory, where proper oversight can be provided. Those caught and convicted of breaking the law can be fined €50,000 ($72,000) and face up to three years in prison. It’s hard to imagine a more efficient way to stifle well-intentioned amateur scientists and drive legitimate threats into the shadows.

Approaches like Germany’s, and fears of DIY gene-editing generally, arise from misunderstandings about the DIYbio movement’s capacity, values and behavior. In the first place, most DIY biohackers are not technically advanced. To date, amateur gene-editing has been focused largely on bacteria and other small organisms, with most experiments failing and most DIY-ers still trying to learn the rudimentary basics of biotechnology. CRISPR-Cas9 is easier to use than previous genetic engineering techniques, but nevertheless quite technically demanding. Deadly basement-lab pathogens and super-intelligent pigs are not in our immediate future.

Moreover, and perhaps most importantly, the DIY bio community is more ethically aware and concerned than some authorities recognize. Codes of ethics have been drafted by the North American and European DIYbio communities, emphasizing values like transparency, safety, peaceful purposes, respect for humans and living systems, and modesty. And contrary to myths of biohackers working alone in dark basement laboratories, a recent survey by researchers at the Woodrow Wilson International Center for Scholars found that 92 per cent of DIYbio community members work in shared spaces or community labs. The community is engaged and committed to ethical behavior.

The United States—and specifically the FBI—has taken a more constructive approach to dealing with the DIY gene-editing movement. There, the community is encouraged to further develop its own codes of ethics, to focus on mutual education and, if necessary, to police itself. This approach reflects a better awareness of the limited threat posed by the overwhelming majority of well-intentioned amateur biohackers. It also builds on a conviction that science is likely to advance more rapidly when people are permitted to experiment and share their results openly, rather than forced into the shadows to work on their own. Concerns about DIY gene-editing are understandable, and Atwood’s warning is important and worth revisiting at regular intervals. But at this stage, the risks are over-stated, and calls to stringently regulate or ban amateur gene-editing activities would do more harm than good.

Daniel Munro is a lecturer in ethics at the University of Ottawa’s Graduate School of Public and International Affairs. Listen to him on The Ethics Lab on Ottawa Today with Mark Sutcliffe each Thursday at 11 am EST.