The Cassini-Huygens probe travelled 1,275 billion kilometres from home. It circled Saturn, one of the most successful robots ever sent skyward. In 2017, it meets its end. 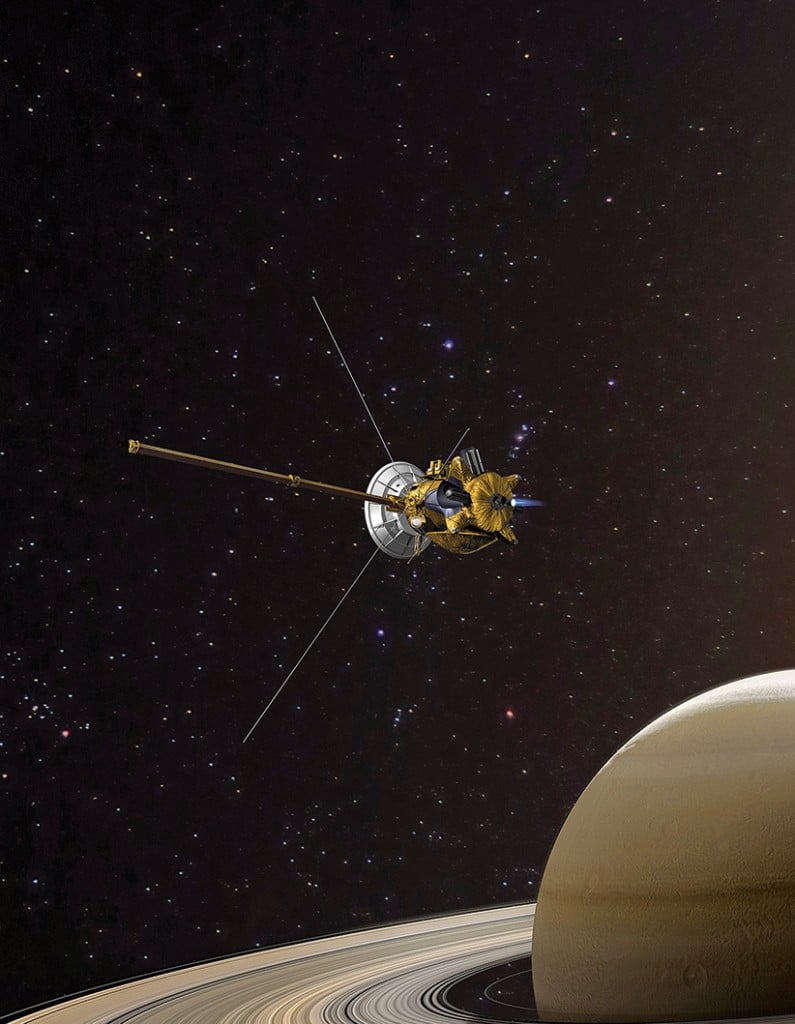 The Cassini-Huygens spacecraft, developed jointly by the European Space Administration and NASA, was launched from Cape Canaveral, Fla., in October 1997. Powered by a 33-kg, red-hot plutonium heart, the starship weighed 5.6 tonnes at birth, making it the portliest interplanetary probe ever sent skyward. Its destination: the haunting, many-ringed Saturn.

It was named for a pair of 17th-century European astronomers: Giovanni Domenico Cassini (1625–1712), a Tuscan who observed—with a telescope smaller than a modern child’s toy refractor—the permanent, gravitationally induced gap in Saturn’s rings that is now known as the Cassini Division; and the Dutchman Christiaan Huygens (1629-95), the discoverer of Saturn’s companion Titan, the largest moon in all the solar system.

RELATED: Why Saturn’s moon Titan is the best spot for an off-world colony

It took six years and eight months for Cassini-Huygens to reach its destination, travelling a serpentine path that used the gravitational pulls of Earth, Venus and Jupiter as slingshots. The slumbering, lumbering machine was awakened every six months to prove that it still was sensate.

On arrival, 1,275 billion kilometres from home, the Cassini orbiter’s cameras revealed the existence of 10 previously unknown Saturnian moons (Aegaeon, Polydeuces, Methone, Pallene, et alia) and bore witness to the extraordinary turbulence of the planet’s atmosphere, including a hurricane with winds of 560 km/h and another storm that exceeded in area even the Great Red Spot of Jupiter.

The Huygens lander—a steamer-trunk-sized contraption crammed with spectrometers, radiometers, and other relics of the prehistoric ’80s—was orphaned from the orbiter on Earth-Christmas Day 2004 and parachuted to a successful touchdown on Titan two weeks later. Its camera soon expired, but the nestling remained in place amid the ice-pebbles of the giant moon’s crème-brûlée crust in a region called Xanadu, where the afternoon temperature is -171° C.

Its child gone, lonely Cassini maintained its Saturn orbit, just outside the outer “F ring,” for more than a decade, occasionally swinging down to an altitude as low as 140,000 km from the surface. This still was not close enough to determine whether or not, as John Jacob Astor IV wrote in 1894 in his novel A Journey In Other Worlds: A Romance of the Future, “the ground was strewn with large coloured crystals, apparently rubies, sapphires and emeralds, about the size of hens’ eggs.”

On July 4, 2014, plans were announced on Earth to terminate Cassini’s mission through the agencies of gravity, momentum and murder. The spacecraft’s demise was fixed for Sept. 15, 2017, one month shy of the 20th anniversary of its launch, and 13 years after it first penetrated the rocky, icy, gossamer rings of the many-coloured sixth planet from the sun.

Discoverer of tiny, unguessed orbs and prober of alien ecologies, Cassini-Huygens was to be steered toward its own demise by its Earth-bound controllers. Planetary scientists explained this dastardly act—NASA sanitized it as “the Grand Finale”—as being in the best interests of future life-seeking missions to Titan or Enceladus, lest an unplanned crash allow a single terrestrial microbial stowaway in Cassini’s instrument cluster to pollute the underground oceans or Superior-sized methane-ethane lakes of Saturn’s tantalizing Caramilk moons.

Cassini-Huygens will be mourned on Earth as one of the most successful and revelatory robots ever sent skyward, and on Saturn itself by the planet’s paramount ruler, who was described by Voltaire in his story Micromégas in 1752 as “a pretty, petite brunette who was only 660 fathoms tall, but who compensated for this small size with many other charms.”

In addition to Astor, who died on the Titanic, the spacecraft was predeceased by its eponyms, and it outlasted (by 239 years) the great Voltaire, if not the Frenchman’s works, including Micromégas, in which a voyageur from the solar system of Sirius visits lovely Saturn, and converses with one of its inhabitants on the meaning of life and death.

“Alas!” the French philosophe wrote, quoting the comely Saturnian. “We only live through 500 revolutions around the sun.” (This translates to about 15,000 years, by our standards.) “You can see yourself that this is to die almost at the moment one is born; our existence is a point, our lifespan an instant, our planet an atom. Hardly do we begin to learn a little when death arrives, before we get any experience.”