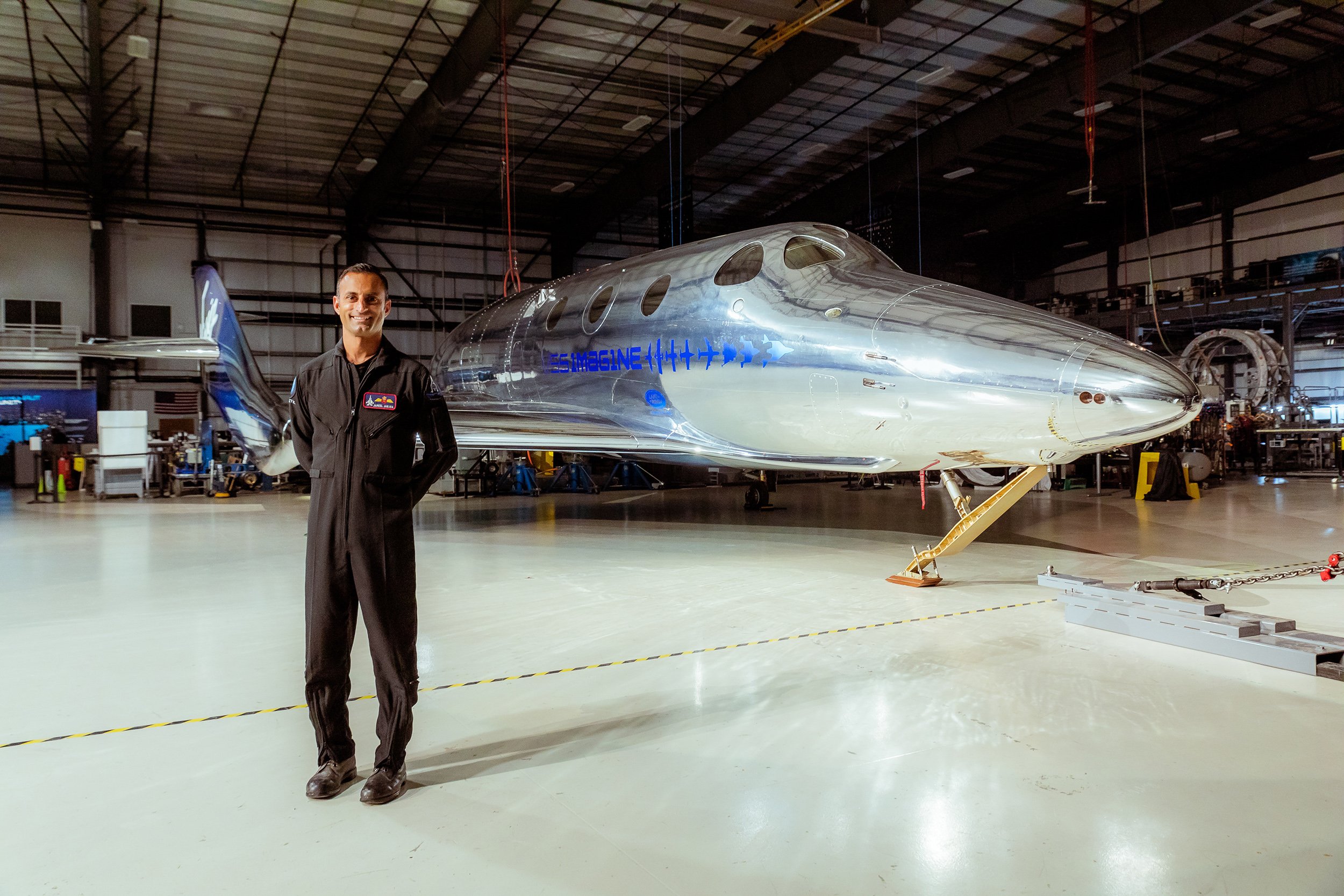 Janjua in front of the VSS Imagine, in Mojave, California, at the Virgin Galactic facility (Courtesy of Quinn Tucker/Virgin Galactic)

Jameel Janjua calls them “future astronauts.” That’s partly corporate speak—Virgin Galactic’s preferred term for customers who pay upward of US$450,000 for tickets to the edge of space. But coming from Janjua, the phrase sounds believable. The Calgary-born test pilot once reached the final round of the Canadian Space Agency’s search for its next crop of astronauts, only to fall short. He knows how hard it is to get to space.

Yet if all goes according to plan, Janjua will soon be slipping the surly bonds of Earth on a regular basis. He’s one of seven Virgin Galactic pilots hired to fly dreamers like himself until they no longer feel the weight of gravity—an essential player, potentially, in a project that is transforming ideas about who can go to space, and how they may get there.

Fully 600 paying customers have lined up to ride Virgin’s odd-looking launching system—basically, two airplanes yoked together, with a “suborbital spaceship” perched in the middle. At an altitude of 15 km, the rocket-powered spaceship launches from the carrier craft and climbs to 85 km above sea level, where it drifts for a few minutes before re-entering the stratosphere and gliding back to ground. Operating both vessels will require the alchemy of knowledge, courage, discipline and poise that national space programs demand of astronauts. Janjua counts among a very few who fit the description.

He was, he says, the kid who had a poster of Canadian astronaut Chris Hadfield on his bedroom wall, and had identified his dream career path by the time he was an air cadet in Calgary: “I was going to be a fighter pilot, a test pilot and an astronaut.” When the CSA opened recruitment in 2009 for two astronaut positions, Janjua was one of 5,351 applicants, ticking all the boxes. He’d finished his undergraduate degree at Royal Military College in chemical and materials engineering, winning a medal as the top graduate. He had a master’s in aeronautics and astronautics from M.I.T. He was serving as a fighter pilot with the Royal Canadian Air Force (RCAF).

Janjua made it to the final four candidates. “I’d be lying if I didn’t say I was disappointed,” he says. “I was this close.” He then served as an RCAF exchange officer to Britain’s Royal Air Force, flying combat missions in Afghanistan and Libya, before becoming a test pilot with the U.S. Air Force, flying F-16 Vipers out of California’s storied Edwards Air Force Base.

He was there in the winter of 2018 when his team received notice that they wouldn’t be allowed to use a portion of airspace due to an upcoming experimental launch from nearby Mojave, Calif., where the billionaire Richard Branson had built a facility for his upstart commercial space company, Virgin Galactic. Janjua asked for the day off, and drove to Mojave. There, in a parking lot with his four-year-old son, he witnessed the company’s first piloted space launch. “You could see it with your naked eye: a rocket motor burning, going to almost 300,000 feet,” he recalls. “It was jaw-dropping.”

RELATED: A NASA engineer on Mars and life in the universe: ‘It would be very lonely it it were only us’

He returned to watch another launch in early 2019, and when a job opening appeared the following year to join Virgin Galactic Pilot Corps, Janjua applied.

He arrives as the billionaires’ club driving commercial space flight approaches a breakthrough moment. On July 11, Branson himself joined a Virgin Galactic flight as one of four designated “mission specialists” in addition to its pilots, a key step toward passenger flight. Jeff Bezos’s Blue Origin recently took actor William Shatner to sub-orbit, while Elon Musk’s SpaceX has developed a variety of rockets and launches to complement U.S. and international space programs.

Their success hangs heavily on the perfectionism of people like Janjua. “There’s still danger,” notes Hadfield, who is a member of Virgin Galactic’s space advisory board. “These are rockets taking them out there. These people are taking money that they’ve earned and putting it toward something that has a not insignificant risk of killing them.” But like airplanes, spaceships have gotten safer, more reliable and less operator-intensive, says Hadfield. “This is obviously the way of the future.”

Of course, for prospective astronauts, the allure of adventure has always outweighed the dangers. John Criswick applied unsuccessfully to the CSA’s astronaut recruitment campaign in 1992. (“There was no way I could compete with a guy like Chris Hadfield.”) But a dozen years later, when Branson announced his plan to offer commercial space flights by 2008, the Ottawa-based entrepreneur was among the very first to lay down money for a ticket. “It’s been 16 years of waiting now, but I’m totally fine with that,” says Criswick.

Janjua likes the idea of extending the experience beyond those with technical backgrounds, noting that most of the 11 Canadians who’ve so far been to space are engineers, scientists and physicians. “What happens when we start taking athletes, songwriters, poets, teachers, grandmothers, people who teach piano?” he asks. “That’s pretty exciting for society to have [people with] a diverse range of perspectives to look back on Earth, who’ll hopefully use that experience to make it a better place.” Canada, Janjua adds, could do with some visibly diverse faces in space, setting an example for younger people. As a second-generation Canadian born to Tanzanian parents, he says he’d be happy “to be the person that I needed when I was younger.”

In July, Janjua was in the so-called “chase” aircraft accompanying Branson’s historic trip. In October, for the first time, he flew the VMS Eve—the craft that carries the spaceship—and he’s now qualified to serve as second-in-command on a space launch mission. After that, his path through the ranks appears clear: command of the mothership; second officer on the spaceship; and, ultimately, a place in the spaceship’s coveted left pilot’s seat.

The gig stands to make him Canada’s most frequent space traveller, and Janjua jokes about sending Hadfield a text message when he surpasses the famed astronaut’s three trips. (Marc Garneau has also been to space three times.) But he’s careful not to get ahead of himself. Technically, after all, he is still a “future astronaut.”

This article appears in print in the December 2021 issue of Maclean’s magazine with the headline, “Above and beyond.” Subscribe to the monthly print magazine here.