The Moon landing was a giant leap. The next leap is staying there.

From 2015: We know we can get there. Next step: live there. And after that? The cosmic equivalent of Everest base camp. How we plan on colonizing the Moon 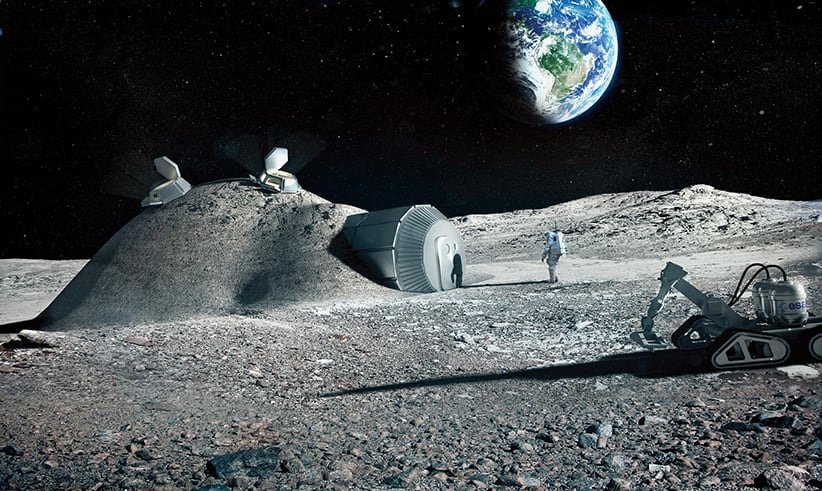 A rendering of Foster + Partners lunar outpost, near the Moon’s south pole.

When Apollo 17, the last manned mission to the Moon, left the lunar surface in December 1972, people on Earth seemed to check it off the cosmic to-do list. Been there, done that. The grey orb was dry and deadly, with freezing 14-day nights that dipped to –270° C and equally long days that reached a blood-boiling 100° C. Mars, meanwhile, was calling. Humanity’s interplanetary ambitions wandered elsewhere.

Then, in late 2009, scientists confirmed the existence of water and found evidence of water at the Moon’s southern pole. “Finding that stuff was a big deal,” says Paul Spudis, a Houston-based lunar scientist who has worked with NASA and the White House. “It showed us that a permanent habitation of the Moon was possible.”

Suddenly, the Moon was once again the solar system’s top travel destination—and, this time, the plan would be to stay. Stephen Hawking, Buzz Aldrin and European Space Agency (ESA) director Johann-Dietrich Wörner all threw their support behind colonizing the Moon. Japan and Russia both announced plans to build lunar colonies by 2030. And, late last year, Canadian astronaut Chris Hadfield said a Moon base, not Mars, should be humanity’s next giant leap. “There’s a public appetite for going to Mars right now in a big hurry,” he said, “but there’s no tech to make it safe enough and affordable.”

Only three days away, the Moon would be the perfect place to learn how to live in space. We already know we can get there. The new question is: can we stay?

Humans have dreamed of doing just that ever since they realized that gleaming light in the sky, ever shifting from sliver to circle, was actually a rock floating in space. Before science brought us there, science fiction did. The second-century author Lucian’s True History, the earliest known piece of fiction to depict space travel, followed a group of sailors swept up to the Moon on an ocean whirlwind. More recently, the Big Three of science fiction—Isaac Asimov, Arthur C. Clarke and Robert A. Heinlein—as well as H.G. Wells, Jules Verne and even Game of Thrones author George R.R. Martin, have taken turns imagining long-term life on the Moon.

In the 20th century, those fictional tales began to overlap with real ambitions. By 1961, the American military had envisioned two separate lunar bases: Horizon, a 12-soldier settlement predicted to open in 1966; and Lunex, an underground colony of 21 by 1968. Neither, of course, panned out. Then again, no earthlings knew then what we know today.

The discovery of lunar water is significant because it confirms the existence of a life-sustaining resource—one that costs a fortune to regularly ship to the ISS. Whether by coincidence, fate or divine providence, that water also happens to be located at the lunar poles. Unlike the Moon’s other, alternately hot-and-cold regions, the poles receive near-constant sunlight, which could power settlement through solar panels, and aren’t home to lethal weather patterns. “They remain a nice, toasty –50° C,” Spudis explains. “You can deal with that easily in space terms.” Consequently, Shackleton Crater, a 21-km-wide crater on the Moon’s southern pole fittingly named after the Antarctic explorer, became the de facto front-runner for lunar real estate.

But if water is all that’s there, why exactly would we go there? “I could give you a thousand scientific reasons why I want to go study the Moon: it’s interesting, there’s great science we can do, we could build a telescope,” Spudis says. “But that doesn’t really move people. They need to see some practical value to it.” The real worth of the Moon, Spudis contends, resides in its ability to transform our Earth-based space program into a space-based space program—that is, to turn the Moon into our gateway to the galaxy.

Because of the Earth’s gravitational pull, it is monumentally expensive to launch anything—spacecraft, humans, fuel—out of its orbit. The Moon, with one-sixth of Earth’s gravity, doesn’t have that problem. If humans can colonize the Moon and turn that all-important lunar water into propellant, Spudis says, we “solve the major stumbling block of getting significant mass and power to different places in space.” The colony would be the cosmic equivalent of Everest base camp, he adds, with one major difference: “The goal is not any particular destination; it’s all the destinations.”

Setting up that cosmic base camp in the first place would be a challenge. Simply shooting the necessary materials out of Earth’s orbit could cost hundreds of billions of dollars. That’s why Foster + Partners, a London-based international architecture firm working on Moon structures with the ESA, decided they wouldn’t send materials; they’d use what was already on the Moon: regolith, moon dust that could be cheaply used to provide protection the Apollo missions never needed. “The longest Apollo mission was three days,” says Xavier De Kestelier, the lead partner on the project. “It was an extended camping trip—albeit a very expensive one.” 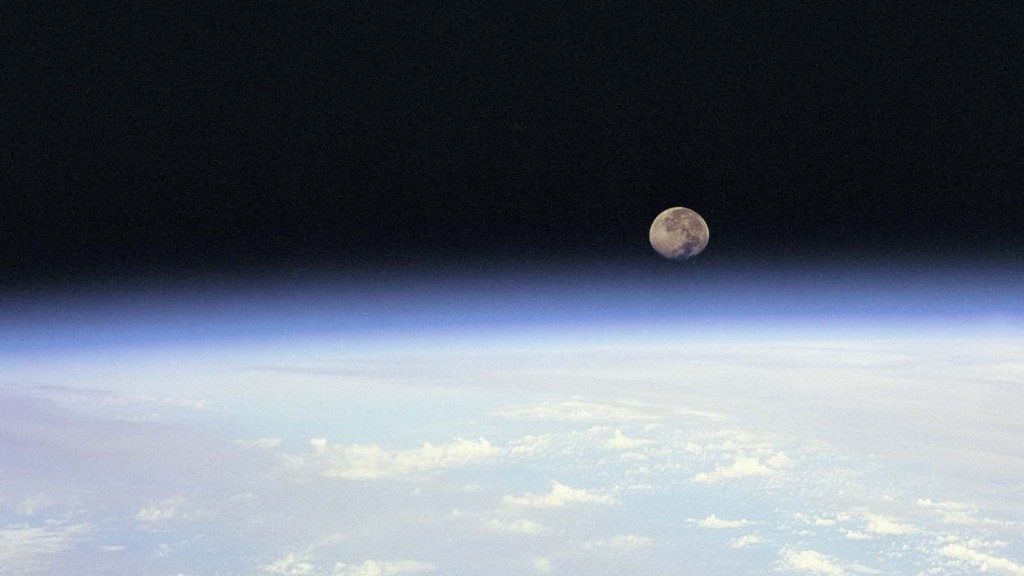 With regolith as its building block, De Kestelier’s team devised a plan: First, send a lander—containing a cylindrical module, an inflatable dome and two robots—to the lunar surface. Upon landing, inflate the dome on one end of the horizontal cylinder and dispatch the robots. Then use the robots, equipped with 3D-printing heads, to gather regolith and print a layer—hollow and honeycombed, like a bird’s bone—on top of the inflated dome over the course of roughly three months. The final result would be a two-storey habitation that houses four people and uses its original cylinder, which would contain the life-support systems, as an airlock. It would be strong enough to fend off extreme temperatures, meteorites and solar and gamma radiation—constant threats given the Moon’s lack of atmosphere. “We wanted to give a global vision of what [a lunar habitation] could be—not just an artist’s impression, but something really imbedded within the science,” De Kestelier explains. “We made an effort to be as accurate as possible, but every part of a mission like that would still need so much research.”

The effect of low gravity on the human body is no exception. Experiences on the ISS indicate zero gravity’s repercussions—poor circulation, decreased bone density, weakened muscles—can be managed, but long-term consequences are still largely unknown.

Another great unknown: cost. A NASA-reviewed report, released in late July, optimistically suggests it could colonize the Moon for as little as $10 billion, provided it could partner with the ESA, Elon Musk’s SpaceX and others. When Spudis enlisted a NASA engineer to help him calculate the costs of his own plan, he arrived at $88 billion over 16 or more years. Author and The Atlantic contributing editor Gregg Easterbrook, an outspoken critic of space colonization, reckons the figure is likely to be much higher. With current technology, he says, it could cost hundreds of billions of dollars—perhaps a trillion—to establish a 100-person colony. “We’re talking about the entire United States federal budget,” he says. “At that point, you just laugh. It just doesn’t make any sense.”

Few of the most-cited motivations for a Moon base move Easterbrook. For the science, he says, send robots; for resources, tap Antarctica or the seabed first; for a Plan B, in the event we wreck our planet, “invest capital in reducing pollution rather than build cans floating in outer space.” “I hope that humanity exists long enough to begin colonization of other planets,” he continues, “but it has no relevance to your life or mine.”

Spudis, too, sees the bulk of Moon colonization as the purview of future generations. “I’m 62, and I’m near the end of my career,” he says. “I’ve got to leave something.” Doing that can be tough when the space community is a “sort of circular firing squad,” competing for funding and attention. “At some point—and I have to believe this, or I would quit tomorrow—logic will prevail,” he adds. “People will see that what’s holding us back is this model of having to launch everything from the bottom of the deepest gravity well in the solar system. To break that tyranny, that log jam, we’ve got to think differently.”