These drugs are being tested as coronavirus treatments. Do any of them work?

As the race to find a vaccine goes on, researchers are trying potential treatments on coronavirus patients. Some show promise, some not so much. 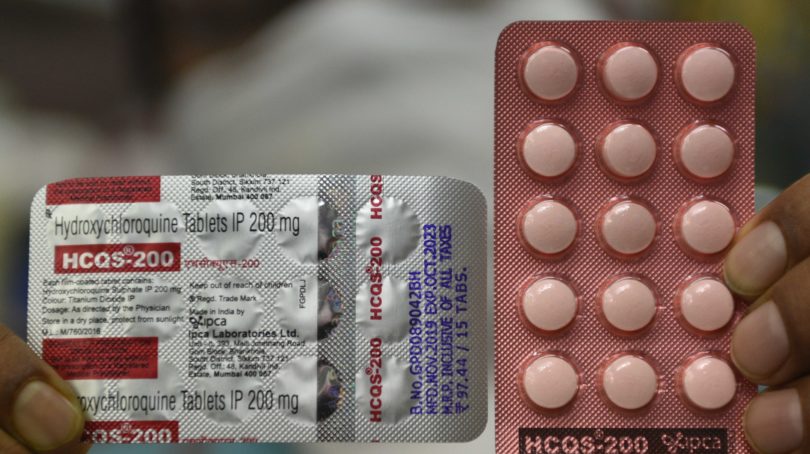 A drugstore employee in Kolkata, India holds a strip of hydroxychloroquine on day eight of the country's nationwide lockdown (Samir Jana/Hindustan Times via Getty Images)

The novel coronavirus has spread rapidly since the first case of human infection was detected in November 2019. There are now more than two million cases worldwide, while the virus has resulted in more than 125,000 deaths. This has left scientists scrambling to find a vaccine, while doctors struggle to find adequate treatment for suffering patients.

“People in health care want to help people and want to do something to fix it,” says Dr. Lynora Saxinger, an infectious disease specialist with the University of Alberta. “The threshold to offer unproven treatment is a lot lower in this setting than it usually is.”

Indeed, different treatments have been tried around the globe, from antiviral medications to immunosuppressants. The hope is they will mitigate the infection enough that patients begin to feel better and get on the path to recovery. But while certain medications have proven promising in small numbers of cases, doctors remain unclear on what, if anything, actually works to curb the effect or multiplication of the virus.

The sense of desperate determination has its upsides and downsides. On one hand, health-care workers are receiving and sharing information at volumes and speeds unseen in modern human history. On the other, treatments touted as effective may be anything but: we can’t be sure, due to a lack of adequate clinical trials and research.

Says Saxinger: “It’s both wonderful, and kind of terrible.”

To understand some of the major treatments being used, Saxinger helped break down each drug, where its testing on COVID-19 stands (if there is any) and its apparent level of effectiveness. She cautions from the start, however, that there is no clearly effective treatment for COVID-19 at the moment: “The real treatment right now remains excellent supportive care.”

You’ve likely heard of it, partly due to U.S. President Donald Trump promoting it by saying it holds “tremendous promise” for treating COVID-19. It has also been used in France. Hydroxychloroquine, and its closely-related counterpart chloroquine, are first and foremost used to treat malaria, a parasitic illness.

The drug is also used to treat autoimmune diseases like rheumatoid arthritis and lupus. In those cases, hydroxychloroquine works as an agent that reins in an overactive immune system. This is seen as potentially helpful to COVID-19 patients because their immune systems can in some cases go into overdrive, causing the body to create antibodies against itself and possibly lead to organ damage. In test-tube scenarios (meaning outside of a clinical setting), the drug has also shown antiviral effects, so the hypothesis is it could block coronavirus from invading cells and multiplying.

Drugs that defeat viruses in test tubes or petri dishes don’t always work in the human body, and later studies (namely one done in the United States) have found that it failed to prevent or treat other viral illnesses in humans. More recently, a study in Brazil of 81 patients being treated with chloroquine has since been halted because some patients displayed irregular heart rates. Disruptions of the heart are a well-known side-effect of the drug.

“If the heart is affected in an ordinary person, that’s one thing,” says Saxinger. “But if you’re giving it to someone who is critically-ill and prone to having heart dysfunction, you’re looking at a bigger risk.”

Saxinger adds that in more severely-ill patients, it’s not clear the drug actually reins in the immune system. It would likely be more effective early in the infection stage, and it’s currently being studied for prevention and earlier treatment of COVID-19. Doctors in B.C., however, have recommended against using it outside of trial settings.

One of the reasons hydroxychloroquine has gained traction is because of its widespread use already to treat rheumatoid arthritis. And of all the drugs touted as effective treatments against COVID-19, it is the only one readily available in Canada outside of trials.

This antiviral drug was approved in 2014 in Japan mainly to treat novel influenzas.

Favipiravir was considered a viable potential treatment option for COVID-19 because it is able to block the replication of RNA viruses, and COVID-19 is an RNA virus. Currently, it is being studied in human trials in China and Japan. In March, Italy approved the drug for experimental use against COVID-19 and has begun conducting trials in regions most affected by the disease.

Zhang Xinmin, an official at China’s science and technology ministry, said favipiravir had produced encouraging outcomes in clinical trials in Wuhan and Shenzhen involving 340 patients. Others have said the drug is not as effective in patients with more severe symptoms.

The key thing about favipiravir and other antiviral drugs like it, says Saxinger, is they are more likely effective when used early on in infection, where the speed of viral duplication is particularly high. “In all of those antiviral drugs, the timing will become very important,” she says. That’s challenging, because some people with COVID-19 don’t have many symptoms up front.

The good news: no significant negative reactions were noted in patients on favipiravir, and it had significantly fewer side effects than other drugs being tried on COVID-19. While Saxinger cautions that she hasn’t seen early definitive data, she is encouraged that some clinical trials of it are already in their third phase, meaning more will be known about its effectiveness in the coming months.

These antiviral drugs are used in combination to treat patients with HIV, and emerged as a potential treatment during the SARS outbreak in 2003. Ritonavir is often added to lopinavir to increase its half-life and reduce its side-effects.

Like other antiviral drugs, this combination works to curb replication of the virus and, due to its use early in the SARS outbreak, there have been theories that it may be effective to treat COVID-19. A recent study in China suggests that lopinavir has antiviral activity against the coronavirus in test-tube trials. There have also been randomized human trials of the drug in China, Singapore and South Korea.

The above-noted trials were inconclusive, Saxinger notes, saying more are needed to see whether it’s effective.  What’s more, the combination can still have severely uncomfortable side-effects, like bloating and diarrhea. “It’s an old HIV drug which I’ve happily not [prescribed] for probably 15 years,” she says.

Some doctors, including those in B.C.’s Centre for Disease Control, have recommended against using the drug for COVID-19 patients outside randomized trials.

Another antiviral drug, remdesivir was created by U.S.-based Gilead Sciences to treat the Ebola virus.

There is some evidence it may work against other single stranded RNA viruses, like COVID-19. Some trials are already underway in China, with phase three set for completion at the end of this month. A preliminary report published in the New England Journal of Medicine tracked 53 COVID-19 patients in the U.S., Europe and Canada who needed respiratory support. All received remdesivir for up to 10 days on a compassionate-use basis, a program that allows people to use unapproved medicines when no other treatment options are available.

RELATED: ‘Being afraid during Ebola kept me safer; I will take the same kind of care now’

Over 18 days, 68 per cent of the patients improved. Fully 17 of the 30 patients who were on mechanical ventilation were able to get off the breathing device. Almost half of the patients studied were ultimately discharged, while 13 per cent died.

Some specialists say this data is promising; others are not as impressed. This is partly due to the data coming almost exclusively from severely ill patients, which leaves open the question of how effective it might be if used before a lot of damage to the body has already been done. And some patients did not show any positive results.

“It is worth watching, but it’s not a slam-dunk yet,” says Saxinger.

Another challenge: the drug is not commercially available and not yet FDA-approved in the U.S. It has, however, been awarded an “orphan drug” status, which is a designation granted by the FDA for treatments of rare diseases. It provides certain government benefits and exclusive rights to the producer to market the drug, but Gilead Sciences has since asked the FDA to rescind this status. Meanwhile, the company has also become overloaded with requests to distribute the drug, meaning it’s difficult for countries like Canada to use it as treatment during the current crisis.

An anti-inflammatory drug usually used to treat gout, a common form of arthritis. It has no antiviral agents, meaning it does nothing to curb the replication of the virus in a patient.

It’s seen as a potentially effective COVID-19 treatment method because its anti-inflammatory function might reduce lung complications, and therefore death, in patients. Research into it is mostly occurring in Quebec, says Saxinger, where doctors are targeting the idea that a patient’s immune response becomes part of the damage caused by the virus.

A trial is currently underway of colchicine, led by the Montreal Heart Institute, where approximately 6,000 patients are receiving either colchicine or a placebo drug for 30 days. The trial is in its third phase, and results will be published in September 2020.

There are no preliminary data that show the drug is highly likely to be useful, says Saxinger. But it was selected as an option because it’s available and already in use. The drug can have gastrointestinal side-effects, like severe and ongoing vomiting and diarrhea.