Killer whales in captivity: An idea whose time has passed?

As attitudes change, it may be time for public pressure to change its focus from captive killer whales to wild ones 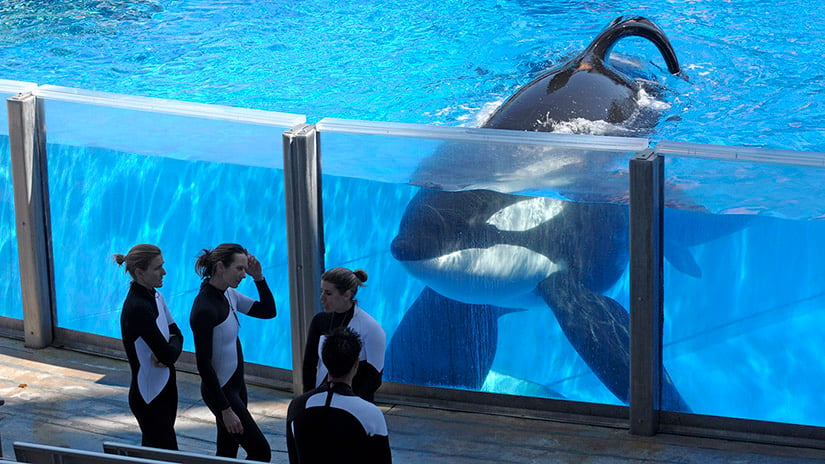 The ripples of the Blackfish effect have continued for so long and reached so far that it’s hard to tell if the 2013 CNN documentary is still what’s behind the push to change conditions for captive whales in North America.

Ontario moved this week to introduce strict new standards for marine mammals in captivity, including making it illegal to breed, buy or import killer whales. The province is home to the Canada’s only captive killer whale, the elderly Kiska, who lives alone at the Marineland theme park in Niagara Falls, Ont., and has been retired from performing. Since she’s already here, she would not be affected by the changes.

As Kiska’s state of solitude shows, Ontario’s new rules are in line with changing public attitudes about using killer whales and other marine mammals for entertainment and display. The theme-park chain SeaWorld, which was pilloried in Blackfish, has been floundering financially; its #AskSeaWorld Twitter campaign backfired; the video series defending its practices has failed to gain much of an audience online. Marineland has been the site of regular protests in recent years (more than 300 people have already signed up to march on the park on opening day, May 16), but insists all its practices are up to industry standards.

The Canadian Council for Animal Care published guidelines for the care and use of marine mammals in December after a 15-year process of meetings, debates, and drafts, says Gilly Griffin, the organization’s director of standards. Although eight provinces require adherence to CCAC guidelines in their animal-use laws, there is no formal system of oversight of non-scientific animals at the federal level. Parks like Marineland are inspected by SPCAs and the industry association Canada’s Accredited Zoos and Aquariums. The CCAC’s recommendations document is “there so that anyone can pick it up and use it,” Griffin says, but it doesn’t have the force of law.

The CCAC doesn’t take a position about keeping any particular species in captivity. It focuses on quality of life. But what is a quality life for a killer whale? Cetacean specialist Dr. Robin Baird has been studying the animals, also called orcas, since 1986. He explains what they need to thrive in their environment, and what people concerned about their welfare should really be worried about.

Q: Totally putting aside whether it’s right or wrong, is it at all possible to approximate killer whales’ natural habitat in captivity?

A: Depending on whether they’ve found a good patch of prey, killer whales may cover 50, 75, or 100 miles in a day. Their overall range in a week might cover a 500-mile stretch. The other thing that’s quite different in the wild is their social groups. Killer whales have these long-term bonds. Offspring stay with the mother for life. They may separate by miles while they’re hunting, but they’re coming back together multiple times a day. Recreating that type of physical or social environment is pretty much impossible.

Relating them to chimpanzees is reasonable. Years ago, I was studying a group of killer whales that was eating a porpoise. Part of the porpoise floated to the surface near our boat, and we went over with a net to try to collect a little skin sample. While we were getting the knife out, one of the whales, an adult male, swam under our boat very slowly, then came up at us, then swam back under again and looked at us. The third time it came up, it grabbed the net and the porpoise and pulled it right out of my hand. They have problem-solving abilities.

Q: There’s increasing recognition of how challenging it is to make a killer whale feel “at home” in captivity. But that’s falling out of favour. There’s exactly one captive killer whale in this country. Are there issues we may be overlooking as social media has been dominated by concerns about captivity?

A: I work with southern resident killer whales, which are the trans-boundary population in British Columbia and Washington state. I’m looking at some of the risk factors they’re facing. The most important [risk] is the reduction of their prey base of Chinook salmon, which are affected both in the U.S. and in Canada by a variety of human factors. What’s complicated is that it’s not the super-abundant salmon runs that are important to the whales, but the hundreds of smaller populations that move in and out of different waters at different times of the year. Killer whales, of course, have to eat all year round. I think the U.S. does a better job at managing small populations of salmon. Fisheries management in Canada tends to be, “Okay, we want there to be tons of fish, and the Fraser-Thompson River has this many million fish, and that’s what we need to manage.” But from the whale’s perspective, we’re not ensuring that all those small salmon runs are protected.

Q: Where should people direct their energy if they want to help killer whales?

A: There are some tangible things you can do. One thing even people in Ontario can do is not eat farmed salmon. When you keep tens of thousands of animals in a very small space, diseases proliferate and they can transfer to wild populations. I only buy Chinook salmon from Alaska, where the population is doing quite well. Also, as time goes on, it becomes clear that many of the things humans like to dump into the ocean have long-term implications. In this case, individual choices are important, but so is pressure on governments to more strictly regulate these things. Peter Ross, a toxicologist at the Vancouver Aquarium, has been looking at the levels of flame-retardants in killer whales. They’re exorbitantly high, and increasing.  Not all chemical impacts are obvious; some are a lot more subtle and do require a lot more testing. For example, the chemical makeup of flame-retardants is such that it’s easy to see how they could cause problems with the immune system. Sometimes those costs aren’t apparent until many years down the road. My wife and I bought a couch without flame-retardants in it.

Q: Any future environmental problem could be a huge risk to the population, because it’s so small—around 80 whales. Are the southern residents, or killer whales in general, under existential threat? Are they going to make it?