What happens to an astronaut's heart during long space travel? 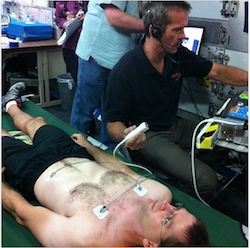 Microgravity is thought to cause muscle atrophy and the heart, of course, is a muscle; but we still don’t understand exactly how it’s affected. When Canadian astronaut Chris Hadfield arrives on the International Space Station in December, he’ll be giving ultrasounds to his crewmates—and today I got to watch him practice how to do it, in a full-size mockup of the ISS.

The training session took place in Building 9 at the NASA Johnson Space Center in Houston, a cavernous, well-lit space filled with ISS modules, where astronauts do their drills (It’s also known as the Vehicle Mock-up Facility). This area is generally restricted to the public; I gained access only after being fingerprinted and ID’ed, and after applying for entrance several weeks ago. As we explored the room today, a tour group walked by through a glass-paneled hallway above, peering down on us with curiosity. 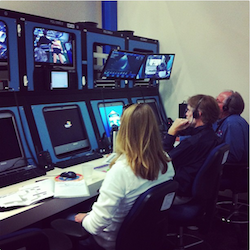 Hadfield, whose friendly manner seemed to put everyone at ease, is the current star of the JSC: in March he’ll assume command of the ISS, the first Canadian to do this. He arrived at the training session and, after a quick briefing, got started. Hadfield’s shirtless subject, a JSC engineer, lay out on a cot bed as the soon-to-be ISS commander performed the ultrasound on his chest. The engineer’s heart could be seen contracting on a small black-and-white screen while sonographers, in a different room, guided Hadfield through the process—much as they’ll do from mission control, while he’s in space. After some time on the cot, Hadfield’s subject got on a stationary bike and had his heart examined while he pedaled. When he’s on the ISS, Hadfield will be applying these same techniques to his fellow astronauts, one of several experiments.

Doing this kind of research is complicated, one of the sonographers told me; unlike clinical trials on Earth, where thousands of people can be included in the study, there are only so many astronauts, and lots of variables that can’t be controlled. Canadian astronaut Robert Thirsk was the first to be involved in this heart atrophy study, the sonographer told me, and it won’t wrap up until next May. Still, whatever they find will be invaluable if we ever want humans to live and work in space. As Hadfield told me later in the day, while we sat inside one of the modules chatting about his work, we’ve got our eyes set on visiting the moon, an asteroid, Mars and even beyond. To accomplish this we’ll need to know how space travel affects the human body, and what to do to stay healthy.