What's it really like in space? Canada's astronauts tell all 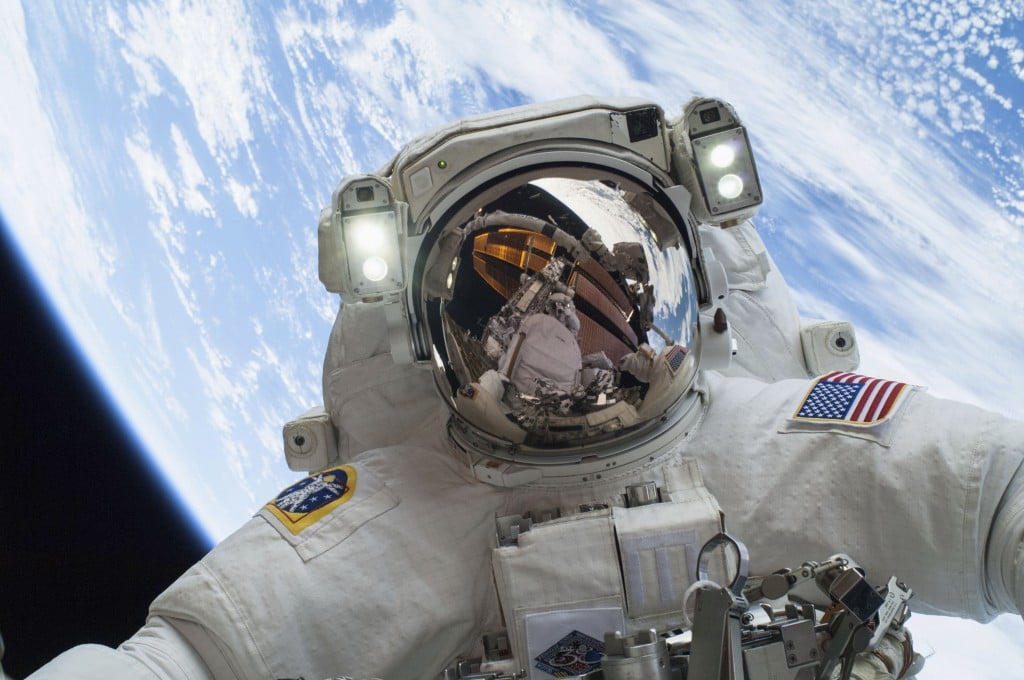 Astronaut Mike Hopkins, Expedition 38 Flight Engineer, is shown in this handout photo provided by NASA as he participates in the second of two spacewalks which took place on December 24, 2013, released on December 27, 2013. The scheduled spacewalks were designed to allow the crew to change out a faulty water pump on the exterior of the Earth-orbiting International Space Station. He was joined on both spacewalks by NASA astronaut Rick Mastracchio, whose image shows up in Hopkins’ helmet visor. (REUTERS/NASA/Handout via Reuters)

For a special Space issue of Maclean’s—on digital and physical newsstands now—we spoke with nine Canadian astronauts, seven of whom have been in space. Here are excerpts from those annotated conversations about an experience that most of us, bound to Earth, could only dream of: the experience of a spacewalk, of being up in the great unknown, looking down upon the world. You can read all the interviews, annotated with interesting bonus space facts, here.

Q: What’s the hardest thing to adapt to when you’re moving outside in space?

Chris Hadfield: In all of the movie portrayals, a spacewalking suit seems sort of insignificant, like a pair of shorts and a T-shirt. No one thinks much about it. But it’s a spaceship, not a spacesuit, an entire life-support mechanism that’s incredibly complex and cumbersome. It’s very difficult to put on and off. You have to run it the whole time you are wearing it, and it redefines how you move. It’s like if you put on a wetsuit and a snowmobile suit and froze yourself solid and then tried to go and do work. You can’t just ignore the clothing; it partially defines the experience. So maybe the most difficult thing is becoming completely attuned to efficiently wearing a garment that is so inhibiting to motion, and making it look effortless, as if it’s the most natural thing to be out there on a spacewalk.

Q: Is the space walk similar to being in water with no land in sight?

Steven Maclean: That’s exactly how you feel before you go outside, because you don’t know how you’re going to react. I kept calm. But I’ve watched many guys make tiny mistakes. The first time, you really feel the inertia of the suit in the first 10 minutes of your flight, so you have to adapt. You ask those questions: Will you be afraid of [what] you don’t know?

Q: What scared you most about being in space?

Dafydd “Dave” Williams: There are always lots of moments that get your attention. In my last space flight, on the third space walk, Clay Anderson and I were outside doing a space walk and the space station alarm went off. “OK, well, I guess we’ll [find out] if there’s a real fire or not.” We kept going, doing all the tasks associated with the space walk. It turned out to be a false alarm, but that certainly gets your attention.

On my first space walk, I was working on the extreme starboard side of the space station and I had to do something a little unusual—a tethered egress. Your feet are always in foot restraints, but on this space walk, my footrest had to be positioned so I was pointed straight out into space. So I had no handrail to grab to help me get out of my footrest. The only thing I could do was to grab my tether and pull so my feet were against the footrest, kick out of the heel restraints, float freely in space and turn around and pull myself back toward the S5 segment of the space station. And you know what? The view was incredible! 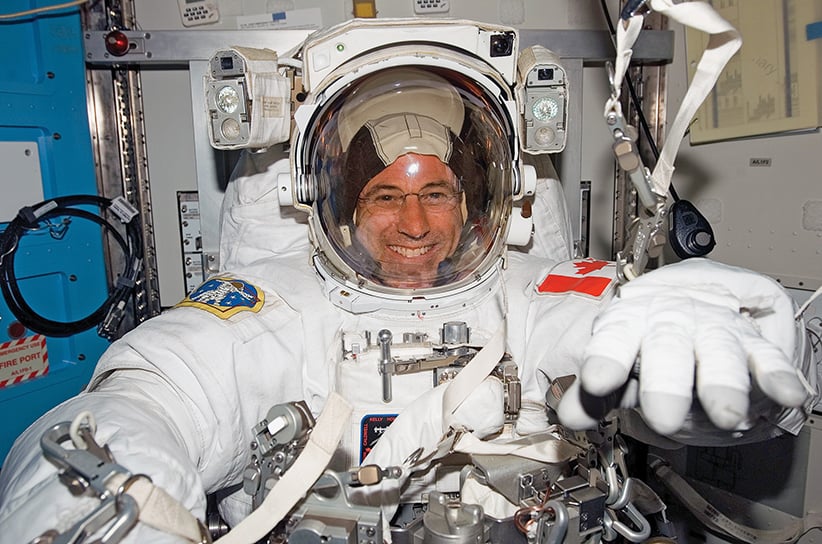 Q: What was your most memorable moment in space?

Marc Garneau: The first time I floated over to look out the window. The launch phase only lasts 8½ minutes, but it’s a rock’n’roll ride. It’s vibration, acceleration, lots of noise and then finally, if everything has gone well, they have a thing called MECO—main engine cut-off—which is when they turn off the engines because you’ve arrived. You’re in orbit over the Earth. And suddenly it’s very, very quiet. It’s dramatic. You realize you’re floating in the straps in your chair. And you take off your seat belt and float over to the window and look out, and you realize, “I’m not looking at a picture, here.” I couldn’t process it all. Even if I forget everything else in my life, that will stay with me, burned into my brain until the day I die.

Q: Did your perspective of Earth change when you were in space?

Robert Thirsk: Absolutely, and of life in general. All astronauts who have flown wish that every human being had the opportunity to fly in space. There’s a spiritualScreen Shot 2015-08-19 at 2.39.35 PM feeling that comes over us when we see the whole Earth from above, when we realize that everything is one and that we’re all connected. There’s a consciousness shift. You look down and see the Earth in all its beauty, but beyond the Earth there’s nothing except billions of miles of empty black void. Within our solar system, we know that Earth is the solitary oasis of life. And who knows, maybe we’re also the solitary oasis of life in our galaxy, so that’s mentally and emotionally very profound. We really get an impression of the fragility of the Earth and its ecosystems, so surely what’s most important is preservation of the human species. It’s not the borders between countries, it’s not the price of a barrel of oil, it’s not trade tariffs, it’s not illegal immigration. Earth is a tiny, fragile oasis of life, and what’s most important is human survival. And you see that so clearly from orbit.

Julie Payette: We get this question so much. People are hoping we’re going to say, “Yes.” I think it’s a myth. Most astronauts are very down-to-earth people. Many of us, three-quarters, have an engineering degree, and we have a very Cartesian, rational approach to things. You don’t go and get swept off your feet. That’s not your job and that’s not why you’re hired. So if you get so mesmerized that you forget to do what you’re supposed to do, whether it’s to open the cargo door of the space shuttle or configure something inside, then you should not be there as a professional operator.

When I saw the Earth from above, personally, as a spacecraft operator, it certainly reinforced and drove home the fact that there’s one place where we can live right now. The seven billion of us are sharing a wonderful planet, and it’s an absolute privilege to see it from above.

Q: You’ve given hundreds of interviews about your experience in space. Is there anything you don’t usually talk about?

Roberta Bondar: There is one thing. I may have spoken about it once or twice in the 23 years since I went to space. Maybe you haven’t seen 2001: A Space Odyssey, but, at the end of that movie, there’s this embryo that’s floating in an amniotic sac. It’s symbolic of rebirth and new ideas. One time, when I was in the galley area, which is where the washroom was, I was completely naked and there was a window out there and I could see the Earth beyond the window. I curled up in the fetal position and floated, as an homage to that movie.