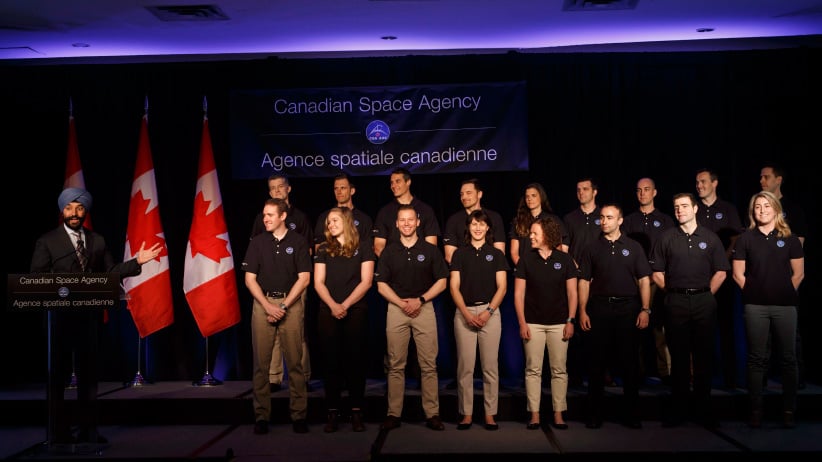 Navdeep Bains, left, Minister of Innovation, Science, and Economic Development introduces the top 17 candidates to be the next Canadian Space Agency astronaut, during a press conference in Toronto on Monday, April 24, 2017. (Cole Burston/CP)

Last week, the Canadian Space Agency announced that its search for two new astronauts has been narrowed down to the final 17 candidates. The agency, along with Minister Navdeep Bains (of the gargantuan Innovation, Science, and Economic Development portfolio) presented a roster of engineers, doctors, and scientists, all vying for the prize of ambling about the stars in bubble helmets. At a time when science itself has been under attack from climate deniers, anti-vaccine dullards, and even the Canadian government itself, it was an encouraging change of tone. But there was one vexing fact about the lineup of candidates: all of them were white. In fact, despite the increasing ethnic diversity of the STEM fields in Canada, our nation has only ever been able to send white people into space.

To be clear, I don’t believe that the Canadian Space Agency is in any way a racist institution. The CSA is limited in its selection by the application pool it receives, and if the pool is skewed towards white Canadians (which, if anything, might be attributed to simple demographic realities), all it can do is choose the best and brightest from that lot. The 17-person shortlist of candidates were themselves drawn from a 72-person peer group, which did include several people of colour. The number of Canadians who have been in space or are expected to go to space will number less than 15, even after the end of this selection process—but if they all happen to be white, it will be symptomatic of a larger problem within our educational system.

The timing of the CSA’s announcement comes on the heels of reports that Black students in the Toronto District School Board are not only being suspended and removed from classes at a rate far exceeding their peers, they’re also being streamed into classes below their academic ability. My own stepfather, a Jamaican-born metallurgical engineer, spoke to this reality when I spoke with him by phone. Some of his colleagues, also from Jamaica and the West Indies, are sending their children back to their countries of origin for better chances at a quality education. “Why would they keep their children here, where teachers expect nothing of them, or even discourage them from their passions? Back home, the subjects are taught at a more advanced level, and their teachers will push them to excellence.”

While parents do bear responsibility in raising bright, ambitious youth, their work can easily be undone by teachers and school administrators who hang their preconceptions around those children’s shoulders. Rachel Décoste, a software engineer and public speaker, told me a story about her sister, who sought the help of a high school guidance counsellor in planning a career as a doctor. “The guidance counsellor said, ‘Your grades are not good enough for even considering medical school. You should look at becoming a personal support worker, through community college.’ ” Décoste’s parents, furious at the counsellor’s obstruction, contacted the school principal and demanded another counsellor provide the information that was asked for. Décoste’s sister is now an anaesthesiologist.

For youth of colour—especially Black and Indigenous youth who are stigmatized by tropes on their intelligence and ambition—the soft bigotry of low expectations can have devastating effects on those young minds. A similar sentiment came up when I spoke with Kike Ojo, an organizational change consultant whose work includes addressing the alarming rates at which the Children’s Aid Society takes custody of Black and Indigenous youth. We discussed the matter of TDSB streaming, and the tendency of guidance counsellors to push certain students towards applied courses, even though a transcript filled with applied courses could disqualify those students from university acceptance. “It really is no wonder that we see this outcome over and over,” Ojo says. “[Parents] actually have to be aggressively involved. We want to believe that success is directly linked to effort and merit, but where race is a factor, it can override even class differences.”

On the bright side, there are examples where institutions have not only acknowledged, but undertaken the work to resolve this problem. Shareef Jackson, a data analyst in the U.S. and founder of the MathLooksGood tutoring program, explained that where public schools fall short, some outside help may be needed. “A lot of students don’t have the motivation to enter the programs, or even stay in the programs, because it doesn’t seem like a realistic goal.”

Jackson attributes his own educational success to an organization called New Jersey SEEDS, a nonprofit which works with bright students from low-income neighbourhoods in order to provide access to private schools and colleges where their aptitudes may be better encouraged. Jackson also mentioned the importance of NASA’s strategic diversity and inclusion plan, which received widespread exposure last year with the release of the film Hidden Figures.

According to Jackson, positive representation and teaching the history of people of colour in the STEM fields can create a positive feedback loop, one where careers in science, medicine, and even space travel occurs to young people of colour as not only a daydream, but a real, possible outcome of hard work. The logic makes sense; if Mae Jemison, the first Black woman astronaut, was inspired to her field by Nichelle Nichols’s portrayal of Lt. Uhura in the original Star Trek, then who knows how many future Katherine Johnsons might be made by NASA’s joint marketing efforts with Hidden Figures?

North of the border, the message seems to be getting through at the university level. Encouraging diversity in STEM fields has recently become a higher priority for institutions like Waterloo, Ryerson, and the University of British Columbia. At the University of Toronto, where Black enrolment in the medical program has historically been thin or nonexistent, only one Black student exists among the current first year medical cohort. In response, U of T launched the Black Student Application program, which aims to promote medicine as a career option among Black students, as well as increase the pool of candidates by boosting applications. All of this is encouraging, but the difference still needs to be made within the seedlot for future prodigies: our public schools.

With the first pair of Canadian astronauts set to be announced later this year, making it the first cohort since 2009, there is much to be excited about. After Cmdr. Chris Hadfield’s stellar performance and social media popularity, sending more Canadians into space will be an awesome feat, no matter their background. And while the Canadian Space Agency continues the winnowing process, hopefully our educators and counsellors across the country will take heed to the fact that science is not only cool again—it’s in drastic need of new faces.

Time to start looking for those future astronauts in your classrooms.