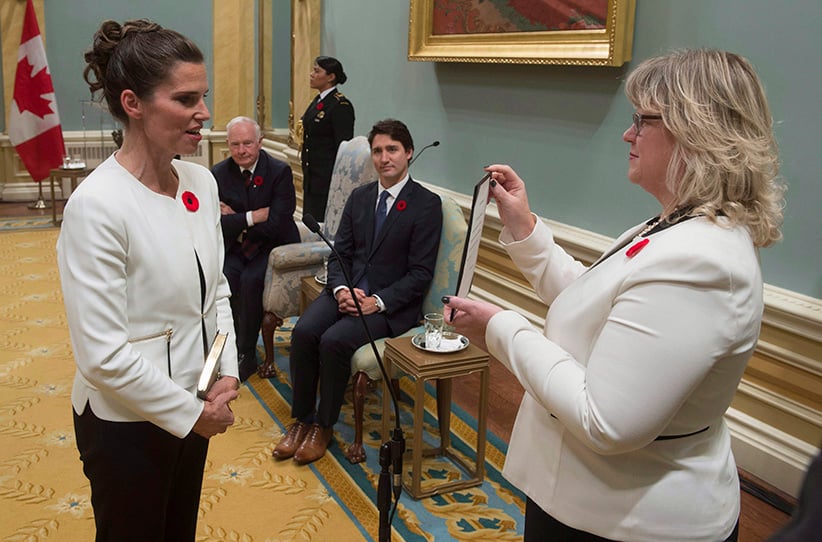 Governor General David Johnston and Prime Minister Justin Trudeau look on as Kirsty Duncan is sworn in as the Minister of Science during ceremonies at Rideau Hall Wednesday Nov.4, 2015 in Ottawa. (Adrian Wyld/CP)

It was only a matter of time before Kirsty Duncan’s appointment to the newly created science-minister portfolio would come under fire from the multiple sclerosis establishment for her past support of research into a proposed theory and treatment of MS posited by Italian venous specialist Paolo Zamboni. And, with “three-two-one” precision, it arrived this week. First, in an interview with Vice on Wednesday, retired MS neurologist Jock Murray questioned whether Duncan could possibly “be aware of the difference between good science and bad science,” because she “chose to ignore the peer-reviewed scientific papers which indicated that CCSVI [cerebrospinal venous insufficiency] was not an MS breakthrough.” Murray’s criticism was tame next to a pronouncement by neurologist Michael Rasminsky in a scathing piece in the National Post. Rasminsky, a professor emeritus at McGill University and a former member of the MS Society of Canada’s medical advisory committee, referred to Duncan’s new position as “the most curious appointment since Caligula named his horse as consul.”

Such extreme utterances have come to punctuate the discussion of Zamboni’s research, which hypothesized that MS could be a vascular condition; he also theorized that venous angioplasty, a procedure available under provincial health plans, though not for MS, could offer symptom relief and even forestall progression. Media coverage of the procedure back in 2009 in Canada disrupted the MS status quo and shone a spotlight on people living with an incurable, degenerative condition who were eager for new approaches and treatments. The National Post story doesn’t mention that Duncan, a former scientist and associate professor of health science at the University of Toronto who holds a Ph.D. in geography, wasn’t alone in calling for further research: Yves Savoie, CEO of the MS Society of Canada, made a show of calling for “accelerated” CCSVI  research in 2010 before an all-party subcommittee Duncan created to investigate neurological conditions (autism, MS, ALS, Alzheimer’s and Parkinson’s) shortly after she won the Toronto riding of Etobicoke North in 2008; so did Alain Beaudet, head of the Canadian Institute of Health Research (CIHR), an organization that describes itself as “patient-based.”

Then, nothing. Thousands of Canadians with MS travelled offshore to sundry clinics, paying tens of thousands of dollars for CCSVI treatment. In interviews with Maclean’s and other media, some reported lasting alleviation of some symptoms; others were disappointed; some found themselves denied aftercare upon returning to Canada in violation of the Canada Health Act; there were two reported deaths. In 2011, months after the panel convened by the CIHR said it was “premature” to conduct CCSVI clinical trials, Duncan tabled a private member’s bill, Bill C-280, calling for a national CCSVI strategy: accelerated clinical trials, a national patient registry to track people travelling offshore, and ensured access to aftercare. The bill, itself mired in politicking, was defeated by six votes in 2012. That year, the Harper government announced a 100-person clinical trial; it began last year and is ongoing.

One criticism against Duncan in the National Post was that she violated a perceived “Chinese wall” between politicians and scientific research, a claim not made when Elizabeth May spearheaded a “federal framework on Lyme disease act,” a national plan for another controversial diagnosis passed by Parliament and the Senate. The Post noted that Tim Caulfield, a health-policy professor at the University of Alberta, was “concerned the [new science minister] job is being filled by an MP with no qualms about exerting “top down” political pressure on the scientific community.” That’s something no scientist wants, as the past decade attests. But CCSVI was mired in medical politics and politics-politics from Day 1; Zamboni’s hypothesis was dismissed outright by MS neurologists and MS societies, even though researchers once regarded MS as a vascular condition; in fact, links between the venous system and the neurological condition predate French neurologist Jean-Martin Charcot’s classification of it in 1868. The CCSVI hypothesis also flew in the face of the entrenched, though unproven, theory that MS is an autoimmune condition, a theory that underlines a thriving MS drug industry estimated to be worth $20 billion by 2024. In Canada, MS neurologists, many of whom worked with drug companies conducting clinical trials or as speakers, were enlisted to research CCSVI, a vascular condition, while vascular specialists were mostly left out of the loop. In such a bizarre landscape, a politician calling for scientific inquiry offered weird synchronicity. In 2011, Duncan told Maclean’s that she was frustrated with the fact that research wasn’t happening: “The CIHR put a political process in place instead of a scientific process. Evidence was being wilfully ignored from the literature, from scientific conferences, and from returning Canadians treated for CCSVI.”

What is striking about the criticism levelled at Duncan by scientists this week is how unscientific it is. Facts are cherry-picked.  In referring to “good science,” Murray, a former head of Dalhousie University’s MS unit, author of an MS textbook, and adviser to the MS Society, appears to be referring to the research published in neurological journals or by MS societies that have discredited Zamboni’s theory, and lead to scores of editorials and headlines that it has been “debunked.” But that’s not the complete picture, as this summary of CCSVI-related research papers makes clear. Research has often been conflicting. Scanning studies have also been all over the map. None has duplicated Zamboni’s original small study.

The National Post asserted “rigorous, independent studies have arguably disproven Zamboni’s hypothesis and his vein-widening ‘liberation therapy’ for treating MS.” But these studies have also raised questions. A 2013 UBC study published in The Lancet that found no connection between CCSVI and MS, and was proclaimed the “death knell” for CCSVI in a Lancet editorial, didn’t follow Zamboni’s protocol, which makes the result like comparing apples and oranges: Instead of using the widely accepted measurement of venous diameter found in textboks, the UBC team employed a different criterion for measuring vein stenosis,  one apparently not seen in published literature, as Zamboni notes here; The Lancet refused to publish his letter to the editor. The UBC study, led by neurologist Anthony Traboulsee, who is heading the ongoing CCSVI clinical trial announced by the Harper government, also deviated from Zamboni’s work in focusing on venous architecture, not blood flow. Another much-publicized and heralded 20-person study out of the University of Buffalo that found no benefit to CCSVI treatment didn’t meet its stated endpoint to improve venous flow, proving its conclusions moot; its size also renders it statistically insignificant, a criticism levelled at Zamboni’s first CCSVI trial.

Also evident in the National Post story is an unscientific sexism—an ad feminam attack—underlining criticism about Duncan’s experience as a young scientist leading an expedition to Norway, recounted in her book and another. Scientists describe Duncan, who was in charge, as “glory-hogging” and “a control freak.” She was accused of “touchy-feely emotionalism,” a decidedly gendered term. There are even shots taken at her clothing choices (deleted from the original Post story but cached here) and exercise routine. Amusingly, she’s even taken to task because she “repeatedly warned of a ‘darker side’ to science replete with power politics and resistance to change.”

In the article, Rasminsky, who declares Zamboni’s theory to be “profoundly non-scientific,” without elaborating, expressed concern about Duncan: “I’m worried about her objectivity,”  he said. “The lack of objectivity in one area certainly translates.” Like Murray, Rasminsky was a CCSVI critic; he co-authored a 2013 editorial “Goodbye to all of that: A short history of CCSVI” that noted “[i]n the last four years, the CCSVI hypothesis has turned the MS world upside-down,” as if disruption of a status quo that has yielded no advances in cause or cure in more than a century were a bad thing. CCSVI had been discredited, they wrote, referring to the UBC study: ‘The scientific process, in the face of enormous pressures, seems to have done its work.” Yet that comment reflects only part of the scientific process; some studies, noted above, report that venous angioplasty does improve symptoms of some people with MS.

For scientists to assert that the scientific process is ever over—nothing more to see here—runs contrary to how science works. It is particularly odd in the field of multiple sclerosis, which remains a medical mystery. Even so, researchers cleave to the notion that, despite wildly varying symptoms and progression, MS is an immunological disease with one trigger for disease progression, even though they don’t know what that cause is. Jock Murray, the neurologist interviewed this week by Vice, made the point in his 2004 text, Multiple Sclerosis: The History of a Disease. Even after 50 years devoted to the exploration of immunity as a primary basis for the “pathophysicological changes” in MS, Murray writes, “the evidence still remains mostly circumstantial. That there is an immunological process is evident. Whether it is the cause or the mechanism by which the cause acts is still unclear.”

Outside the official MS research orbit, new insights into the role of the vascular system and blood flow in neurodegenerative diseases, between the brain and the heart, are happening (a few examples here, here and here). The recent discovery of a brain lymphatic system linked to the vascular system also could potentially revolutionize science in the field, as suggested in this paper published last month.

The notion itself that ideas are inherently “good” or “bad” is anti-science, says Michael Shannon, a former deputy surgeon general and former co-chair of the FPT steering committee on blood governance, who supported accelerated CCSVI research in Canada: “If one looks carefully at the history of scientific revolution, it becomes very clear that good ideas are very often seen as bad science, because they fly in the face of conventional scientific thinking or beliefs,” Shannon told Maclean’s this week. “Good science, in my opinion, should ask more questions than it answers, and it should never be conducted at the expense of new ideas.”

Now Canadians will have to decide what they think of a science minister who, as an MP, was willing to ask questions and call for research into a new idea for a population numbering more than 100,000 Canadians who have no other options, even if that meant pissing off the medical establishment.