You know virtual reality helmets? I tried one on.

Kate Lunau floats around on the virtual International Space Station 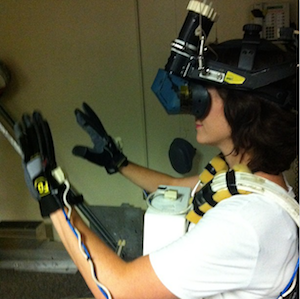 In space, there’s no up or down—it’s a 360-degree world. And that can be extremely disorienting, as I learned shortly after getting suited up today at the NASA Johnson Space Center’s Virtual Reality lab, where I took a “spacewalk” with Jeremy Hansen, one of Canada’s newest astronauts. Despite feeling mildly seasick as I roamed the outside of the International Space Station, it was a thrill.

At Johnson’s VR lab, astronauts practice for all sorts of situations they might encounter in real life on the ISS. Canadian Chris Hadfield, who’ll assume command of the ISS in March, is working a lot in VR right now to master SAFER, a propulsive backpack that can save spacewalking astronauts should they drift away, one of the lab technicians told me. In the VR lab, there’s a console filled with monitors where astronauts can operate a virtual Canadarm; and there’s another area where astronauts donning VR helmets can practice climbing all over the ISS to do a repair. That second station was where Jeremy and I went. 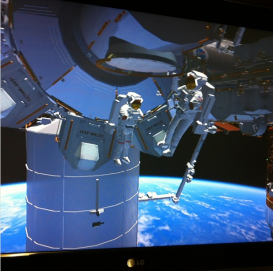 The view from inside the VR helmet. (Photo: Kate Lunau)

A software technician helped set us up: she put a massive helmet over our heads, and slipped wired gloves onto our hands. As soon as the helmet was lowered over my eyes, I felt submerged in a different world. In front of me I could see the Space Station, and beyond it, the blue curve of Earth. It was beautiful, but my stomach lurched: the perspective is nothing like on the ground. I could move in any direction, and felt immediately disoriented (no wonder even seasoned astronauts can get lost aboard the ISS). Jeremy helped me figure out how to grab a railing and climb around; eventually I could see him in his spacesuit in front of me, waving.

It’s easy to see why this type of practice is important for astronauts, especially when paired with work in the Neutral Buoyancy Lab, a massive swimming pool containing a mockup of the ISS where they run through drills in their spacesuits. But underwater in the NBL, there’s still an “up” and a “down.” That wasn’t the case in VR, nor is it in space. When I finally took the helmet off, the others told me my face was white as a sheet. But even while battling nausea, the experience was so novel and exciting I didn’t want it to end. The best part: when a technician fixed me to the end of the Canadarm2 to really give me a view.