He was an artist with many talents. An enthusiastic force in Winnipeg’s art scene, he was always quick to help others. 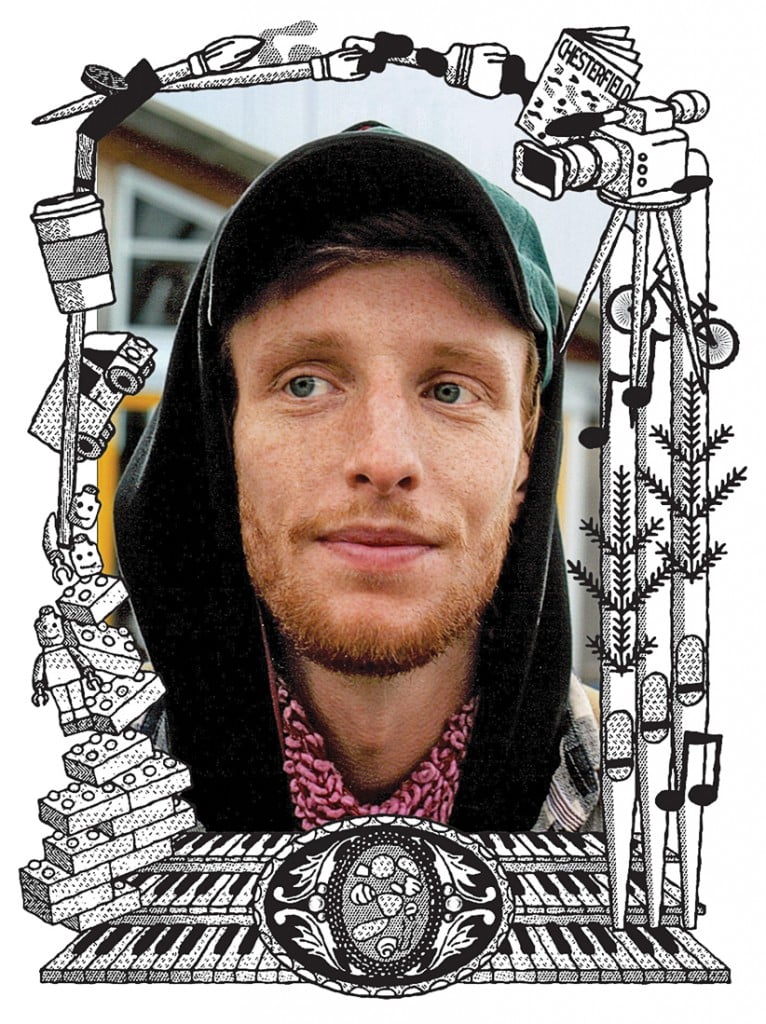 Scott David Leroux was born in The Pas, Man., on Feb. 16, 1988, to Doug, a biologist and fisheries manager, and Janice, a former school principal. Scott had two older siblings, Krysten and Ryan.

Scott was a colicky baby. Only driving quieted him, says Doug, who spent many nights motoring Scott around in the family van, once driving 45 minutes from The Pas to the Saskatchewan border. “We saw many a sunrise together,” Doug laughs.

From the time he was three, Scott’s parents knew they had a budding artist in the family. Doug once brought home a surplus box of dot-matrix paper, and with it Scott created a comic called Karate Rope. “He just drew and drew and drew,” says Janice. When his parents got him a camcorder, he started painstakingly making little Lego stop-motion animations. In Grade 4 he was mad for hockey, and played on the local team. “He wasn’t a good hockey player,” says Janice. “But he always won awards for best sportsmanship.”

When the family moved to Lac du Bonnet, northeast of Winnipeg, Scott took up BMX biking. With his dad, and funding from locals to pour a cement pad, he built a community BMX park.

In 2007 Scott headed to the University of Manitoba in Winnipeg to study fine arts. He paid for university working summers as a tree planter. For the lanky, six-foot-three redhead, whose mulleted hair often erupted in all directions, U of M was a haven. “He was definitely his own breed,” says friend Ian Johnson. “Still, he could make connections with anyone.”

At U of M Scott founded and edited Chesterfield, a free magazine showcasing student art. He found an old bike that he fixed up and rode almost every day, even in the winter. “He could spot a diamond in the rough,” says his friend Ed Oakes. Later, Scott regularly volunteered for the Winnipeg charity the Bike Dump, repairing and building bicycles for kids in need.

Scott was deeply affected by the murder of Tina Fontaine, an Aboriginal girl whose body was found in the Red River in August 2014. One night, Scott went down to the Alexander Docks to pay his respects. Standing in the dark he saw a man slip into the water and float away. Scott found a flotation belt on the dock, put it under his arm and jumped into the river. “He was terrified,” says his mother. He pulled the man to shore where two other men helped them onto land. The man gave Scott a quiet thank you and walked away.

Scott grew into a prolific musician, photographer, painter, filmmaker, composer and collaborator: an enthusiastic force in Winnipeg’s alternative arts community. His artwork often had a surrealist bent, and musically Scott was “all over the map,” says his girlfriend, Zorya Arrow. Always positive and upbeat, he had a dazzling number of different projects and personas on the go. And, adds Arrow, he was always “trying to foster creativity in anyone he knew.”

He had many bands, which played small festivals and off-beat venues. One, called Church, had a violinist, cellist and Scott on organ. He became obsessed with organs after hearing the sound of one waft into his home from nearby First Lutheran Church. Employing his charm on the church’s music director, Scott was allowed to teach himself to play that organ in exchange for sweeping the church and maintaining the instrument.

Scott’s day job after university was far more conventional. He drove a truck for Core-Mark International, delivering products to convenience stores. He loved being on the road, looking for the best coffees along his routes. “Work was his means to an end, and his end was art,” says his father. Scott often showed his work in galleries and performed his music, but never for money. And he helped friends any way he could—often offering his old Chevy van to other artists to move their gear.

On the morning of Oct. 29, Scott, usually healthy, called his mother saying he might have food poisoning. Later that day Janice phoned Scott, who was now experiencing chest pains. Driving from Lac du Bonnet to Winnipeg to see him, a worried Janice phoned Scott from the road, urging him to immediately take a cab to the hospital. She met Scott at the Health Sciences Centre and after a short wait he was taken to a bed. Almost immediately, his aorta burst, killing him. He was later found to have an enlarged heart. He was 28.