Sean Spicer and the soullessness of Hollywood liberalism

At the Emmys Spicer mocked all the ideals Hollywood claims to hold in such high regard. Exactly who was the butt of the joke? 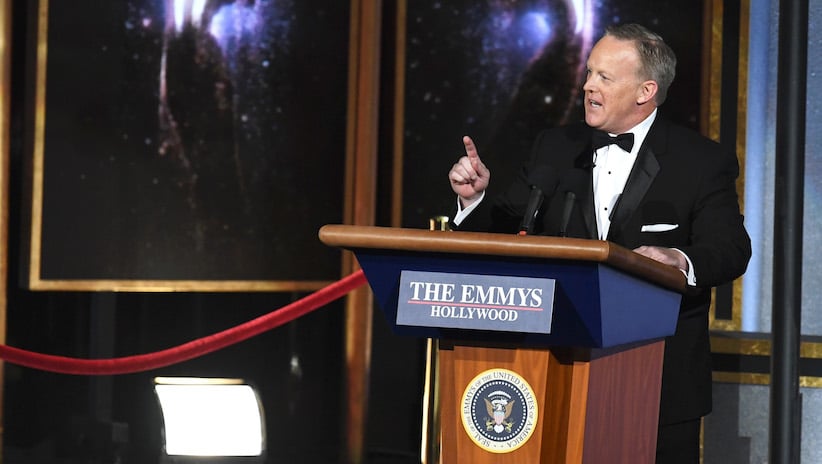 Early in the broadcast of the 69th annual Emmy awards Sunday night, former White House press secretary, Sean Spicer, wheeled out a faux dais and offered a reenactment of an earlier appearance before the press corps. It was on that occasion, on Jan. 21, that Spicer told journalists that the crowd present for President Trump’s inauguration was “the largest audience ever to witness an inauguration, period.” (It wasn’t.) Sunday night, at the bidding of host Stephen Colbert, who speculated about the show’s ratings, Spicer joked: “This will be the largest audience to witness an Emmys, period.”

There was an immediate backlash on Twitter, with viewers noting angrily that Spicer, who was recently selected as a visiting fellow at Harvard, was already being “normalized” by the establishment. Others noted drily that while Melissa McCarthy, who so brilliantly pilloried Spicer on Saturday Night Live—so badly, it was reported at the time, that Trump was said to have been bothered by how weak it made Spicer appear—had to sit quietly in the audience as Spicer was for some reason allowed to rebuild the persona she had so deftly and completely undercut.

But just as he once revealed some truth about a darkness and depravity residing at the heart of the Trump administration, Sean Spicer has appeared once again as avatar, only this time for the other side of America, hinting at a decadent soullessness at the core of Hollywood liberalism.

The never-ending criticism of Hollywood awards shows from the right, generally, is how they have become long-winded primetime showcases of overbearing liberal self-congratulation. The grandstanding speeches and finger-wagging tone regarding all the modern left’s prized topics nag at those who either reject a progressive vision of the world outright, or discount it as an opportunity for hollow self-promotion. For every speech about global warming, there are a million photos of celebrities swanning around the globe on mega-yachts; for every lecture about equality, there are a hundred stories about women actors being paid millions less than their male counterparts.

Hollywood, for its part, carries on holding its moral high ground, demanding perfection from everyone, apparently, but itself.

Then Sean Spicer rolls into Los Angeles, fresh from his Ivy League appointment, and a room full of quote-unquote Hollywood liberals laugh about that time he disingenuously, unapologetically, and brutally mocked in one short press conference nearly all the ideals America’s actors, journalists, and academics claim to hold in such high regard. And the accusations of hypocrisy from liberalism’s enemies—that liberals stand for issues out of convenience, rather than conviction—begin to have a bit more salience, and are afforded a touch more truth.

And so the question we were ultimately left with Sunday night, as Sean Spicer stood awkwardly at the side of the stage as CBS segued to an advertising break, is much deeper than merely whether Sean Spicer has been normalized or rehabilitated. The question instead is who, in the end, was the butt of that joke?

How is anyone supposed to believe in liberalism if even its most vocal adherents barely seem to?