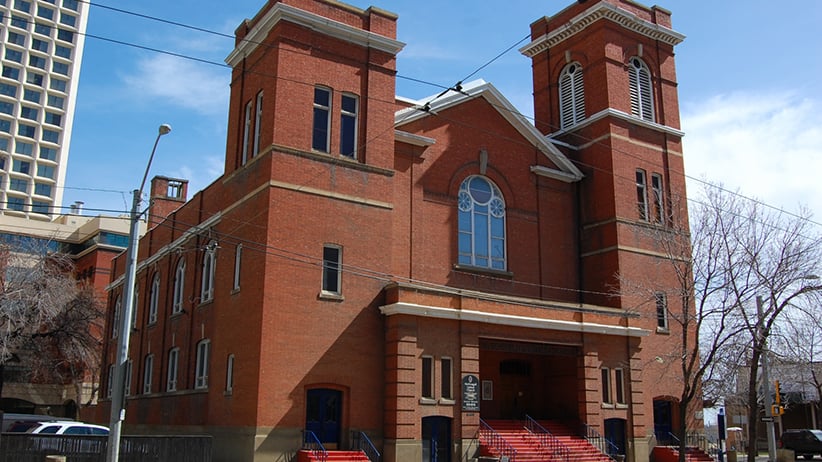 Edmonton has, probably too late, taken alarm at the state of its downtown McDougall United Church. To understand the story, you must realize that this is a name to conjure with in a city of the old fur trade. The McDougall family of Methodist missionaries were 19th-century trailblazers in northern Alberta for the English language, English civilization, and non-conforming English religion. The church was built in their honour in 1910, just off the shoulder of McDougall Hill, facing away from what was then McDougall Avenue.

The actual congregation of the church has dwindled to about 140 people—probably a generous count. As a group, those parishioners have come under strong criticism because they refuse to co-operate in letting the city stamp an official heritage designation on the building. This cannot practically be done without permission of the church, which would prefer to either sell the land, and let the bricks fall where they may, or sell the church back to the city for $1, renting it back one day a week.

This leaves the impression of a rather un-Christian hostage-taking. But it is rational. The city’s fund for heritage preservation wouldn’t make a dent in the $18 million to $25 million of work that engineers say the church needs within the next seven years. Private fundraising is hopeless, and the city politically helpless to act, if the church remains a church.

Everyone agrees it would be awful if the McDougall Church were to be knocked down. But in a western city, these arguments are oddly context-less, carried on in the way a baseball fan pleads for a favourite player to be elected to the Hall of Fame. The McDougall has the merits of any Protestant church built in 1910, but probably no more—no more than some sturdy Victorian brewery, or any one of 50 churches of equal or greater antiquity in Toronto. Its square floor plan has made it a good venue for choral and chamber music, but mostly because the costs of its upkeep haven’t been billed to those users.

The very frequent editorials in which Edmonton lambastes itself for not preserving its architectural heritage have a mad prophetic quality. Our broad reliance on the market to preserve old buildings of alleged special character is deemed by columnists to be a continuing failure, a variety of Original Sin. It sometimes verges, frankly, on blaming Edmonton for not being older. I have trouble finding evidence that Edmonton has done badly by the standards appropriate to a city that barely existed in 1900. Yet we judge ourselves for not being Prague or Lyon.

There are literally dozens of Edmonton buildings still standing from the same period as the church. The best are still in unsubsidized use. And I suspect that an objective architecture critic from outside would not, in fact, deem those buildings automatic priorities for rescue. The ranting shade of an Ian Nairn or a Nikolaus Pevsner would surely emphasize buildings of a type not existing in enormous numbers elsewhere, like the eccentric St. Josaphat and St. Basil Ukrainian Catholic churches. Or he might rhapsodize about the Legislature Annex—a poison-green glass box that is almost always thought of by visitors and users as a ’70s mistake. It was actually put up in 1951, at about the same time as New York City’s Lever House: It’s probably the oldest curtain-wall building in the country.

That goes to show that architectural preservation is more complicated than an impulsive, indignant, save-the-whales attitude allows for. Age and familiarity, and even attractiveness, are not decisive on their own. Plus, if City X invests in saving buildings that have meaning only to City X, or value only in their immediate visual settings, it may have nothing left for structures of wider significance.

On the other hand, I do live in the neighbourhood of the McDougall Church. (To hell with wider significance!) And I know that something less nice will certainly go up in its place.

The church was planned and erected by people with no fame or outstanding gifts. They were among hundreds—a class that existed within living memory in every civilized community—who knew how to put up a reasonably attractive, human-scaled building for some common purpose. Anyone who has driven through the eyeball-flaying suburbs of Edmonton knows that this ability is as lost as the secret of Greek fire. That is the real problem behind the controversy, and it is not a problem particular to us. We’re just a bit poor at reckoning with it.