Sepp Blatter says he will resign as FIFA president

The 79-year-old had just been re-elected to a fifth term, despite widening corruption scandal 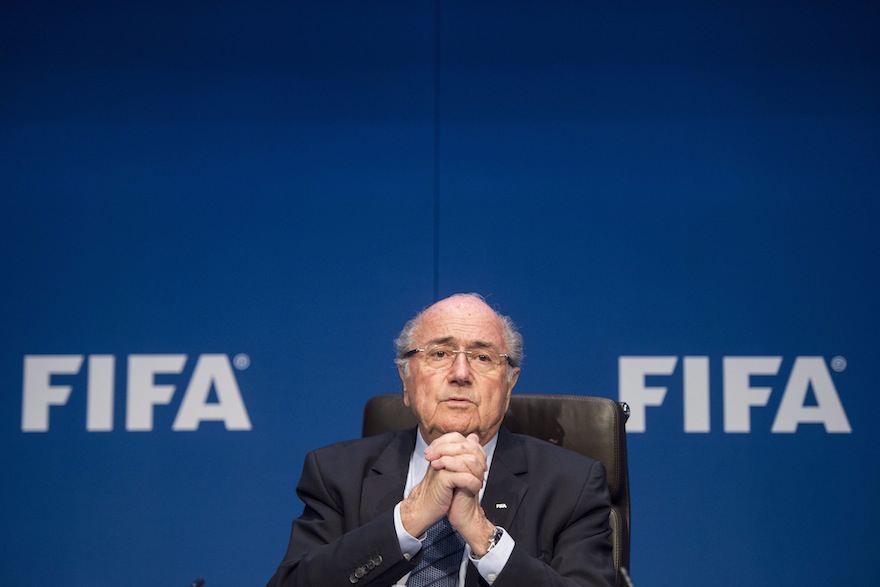 ZURICH — The end for Sepp Blatter came suddenly, just days after he had seemingly solidified his hold on FIFA.

The 79-year-old leader of the world’s most popular sport defied global animosity last week to win four more years in office. But his re-election only increased the pressure from colleagues, sponsors, athletes and fans for Blatter to step down as FIFA’s president.

At a hastily arranged news conference Tuesday, Blatter announced he would leave office within months and called for a fresh election to appoint a successor.

“I cherish FIFA more than anything and I want to do only what is best for FIFA and for football,” said Blatter, who could still be a target of U.S. investigators delving into decades of corruption and bribery accusations against FIFA officials.

After generations under Blatter and his mentor, Joao Havelange, the announcement left FIFA without a leader and without a clear course forward. It sets off a global power struggle for control of the organization as a criminal investigation intensifies.

A strained and serious Blatter read a six-minute statement in French before exiting without taking questions.

Blatter had been defiant and feisty in the same room on Saturday, fending off questions about FIFA’s battered reputation and the chance he could be arrested.

His mood had changed in the 24 hours before his announcement, Blatter aide Walter Gagg told The Associated Press.

A federal indictment last week detailed apparent bribes from a FIFA account totalling $10 million to senior officials for voting South Africa as the 2010 World Cup host. Late Monday, reports laid a clearer trail of complicity to the door of FIFA headquarters, if not Blatter himself.

“We know that the in the last 48 hours he was thinking of the future and perhaps what happened in the last hours, this gave him the conviction,” Gagg, a long-time confidante of Blatter, told the AP in a telephone interview.

“We had lunch with him yesterday (Monday). He was relaxed, he was fine,” Gagg said. “I had a very good meeting with him early in the morning (today). Then came the different information from the U.S. with this and that.”

The South African angle threatens to tarnish memories of a bid campaign that brought Nelson Mandela to Zurich for the winning vote in 2004. At risk also is the legacy of a World Cup that was an organizational triumph for FIFA and South Africa, and bolstered Blatter’s reputation as a friend of Africa whose loyalty stood firm in Friday’s election.

Even before the election, Blatter’s ability to travel to the U.S., or other countries where a Swiss national risked arrest and extradition, had become a distracting story.

Blatter’s vigour in acclaiming his election victory — a 133-73 win over Prince Ali bin al-Hussein of Jordan — was gone by Tuesday.

“This mandate does not seem to be supported by everybody in the world of football,” Blatter said. “I will continue to exercise my function (until the new election).”

Elections are expected to take place sometime between December and March.

“I am at the disposal of all the national associations who want a change, including all of those who were afraid to make a change,” Prince Ali said in an interview with CNN.

The head of Canadian soccer said he welcomed Blatter’s decision. Canadian Soccer Association president Victor Montagliani said change was needed because the game has lost its moral compass — at least in the boardroom.

The CSA president does not think the FIFA scandal will tarnish the Women’s World Cup, which kicks off Saturday in Canada. He says the women play for the love of the game and it shows.

Montagliani did not vote for Blatter at Friday’s FIFA Congress and he says he personally told the president why.

Michel Platini, the president of European body UEFA, had called for Blatter’s resignation last week before the vote. On Tuesday, he praised Blatter’s decision to go.

“It was a difficult decision, a brave decision, and the right decision,” said Platini, a former protege who planned a strategy meeting of UEFA members to discuss anti-Blatter tactics in Berlin later this week.

Platini opted out of taking on Blatter head-to-head in last week’s election, preferring to support the prince. But the former star midfielder for France and Juventus is a likely candidate for the next vote.

The next few months will likely also see further arrests in the corruption case.

The U.S. Department of Justice indicted 14 men last Wednesday, including the seven arrested in dawn raids on a luxury hotel in Switzerland.

The Justice Department said Tuesday it would have no comment on Blatter’s announcement. The Swiss attorney general said Blatter was not under investigation in Switzerland, but authorities said last week they have opened a criminal probe into the 2018 and 2022 World Cup bidding votes.

Blatter’s pending departure will see 2018 World Cup host Russia lose a strong ally, and could cause unease in Qatar, the host of the 2022 tournament.

The consequences of those World Cup hosting votes in December 2010 defined Blatter’s last full term in office, and a new president may want to re-examine the decisions.

In pledging a burst of modernizing reforms during his final few months, Blatter acknowledged that cultural change at FIFA has not gone far enough on his watch.

“FIFA needs a profound restructuring,” said Blatter, who will try to impose term limits to ensure no future FIFA president matches his time in office.

Blatter again directed blame for FIFA’s reputation at his executive colleagues who have repeatedly been implicated in bribery and corruption.

Blatter is also a member of the International Olympic Committee.

“We highly respect this decision of President Blatter to step down and to initiate the necessary reforms, and to make way for a new leadership of FIFA to drive these changes,” IOC President Thomas Bach said in a statement.

Blatter joined FIFA in 1975 as technical director for development projects, was promoted to general secretary in 1981 and spent 17 years as right-hand man to Havelange of Brazil before being elected to lead world soccer.

The new election will be overseen by Domenico Scala, chairman of FIFA’s audit and compliance committee, who praised Blatter’s “difficult and courageous” decision.

“This is the most responsible way to ensure an orderly transition,” Scala said. “There is significant work to be done to regain the trust of the public.”