Sex scenes go granular in the age of #MeToo 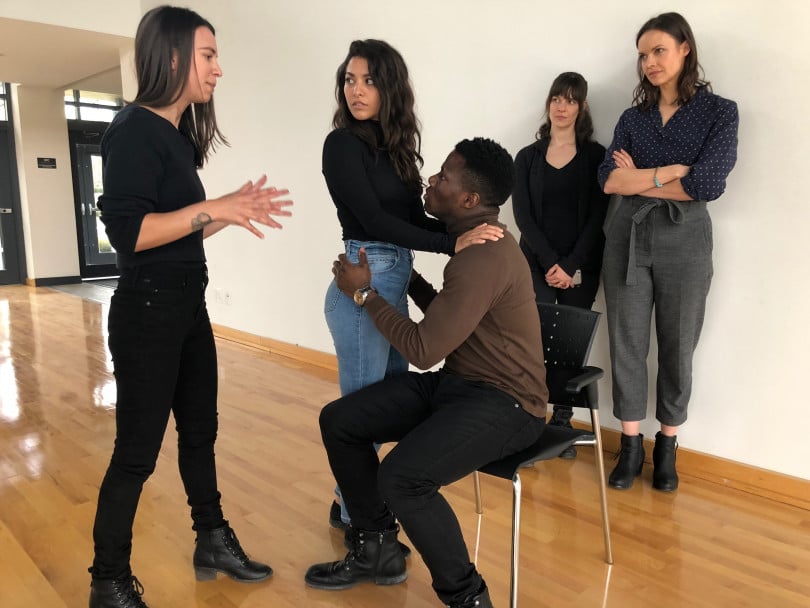 Lindsay Somers, left, works with actors while Casey Hudecki, second from right, and actor, director and producer Liz Whitmere look on in the background. (Alice Hopton/CBC)

What Salvatore Antonio remembers from ﬁlming his ﬁrst intimate scene was breaking out in cold sweats. “It was a nightmare in terms of humiliation,” says the Toronto actor of ﬁlming a made-for-television movie in the early 2000s when he was just in his 20s. Antonio found himself nude thanks to a modesty garment that was supposed to cover his genitals but failed to work. Rather than an opaque piece of fabric with a drawstring to keep it in place, he was given one made of translucent nylon with a loose elastic opening.

The garment, to put matters delicately, came off mid-scene, leaving Antonio and his co-star in an intolerable situation. “I didn’t want to stop the scene because I’d have to disengage to ﬁnd the thing, which would reveal me even more,” Antonio recalls.

Jess Salgueiro, an actor from Toronto who plays Mean Nanny on CBC’s Workin’ Moms, recalls feeling vulnerable and degraded after an intimate scene during her ﬁrst feature ﬁlm. “I was told that I would be in bed kissing my male co-star,” Salgueiro says. “During shooting, not only was my co-star hitting on me the whole time, the male director asked me to simulate oral sex on him. It was completely unexpected and sprung on me when I was already [ﬁlming] the scene, wearing next to nothing, and trying to navigate the actor’s advances on me.”

READ: He stole their hearts. Then their money. Meet the women trying to catch him.

Such stories are common. Across the ﬁlm and television industry, intimate scenes have been the product of improvisation—a direction to go for it and see what happens—rather than thoughtful choreography. Antonio’s only formal direction was that the scene needed to be “hot and raunchy” and would end once he poured champagne on the other actor’s head. Change was needed. The #MeToo movement, which exploded in 2017 and turned the spotlight on everything from casting-couch culture and its culprits like Harvey Weinstein to the mishandling of intimate scenes, was a major catalyst.

In 2018, the Screen Actors Guild-American Federation of Television and Radio Artists (SAG-AFTRA)—the Hollywood union that represents ﬁlm and television actors—released a code of conduct banning auditions in hotel rooms or private homes. More telling of the shifting power dynamic on set has been the rise of “intimacy coordinators,” liaisons between directors and performers who prepare actors for scenes involving nudity or simulated sex. Industry pioneer Alicia Rodis effectively invented the role and co-founded Intimacy Directors International, an American non-proﬁt group that certiﬁes industry professionals, in 2015. Now, HBO mandates the use of intimacy coordinators on the shows and ﬁlms they produce, while Netflix and Amazon use them regularly.

After participating in an intimacy coordinator pilot project for HBO in Toronto in the summer of 2018, Lindsay Somers, who trained as a paramedic and worked on medical scenes on movies and TV, founded Intimacy Coordinators Canada later that year. The company has two certiﬁed intimacy coordinators—Somers and Casey Hudecki—and two apprentices. Taking a cue from the U.S., Somers recently collaborated with Canadian performers’ union Alliance of Canadian Cinema, Television and Radio Artists (ACTRA) on a best-practices guide for scenes involving intimacy and nudity. The guide was released on March 8, International Women’s Day.

READ: Let’s finally call ‘violence against women’ what it really is

Hudecki likens her role to organizing an on-camera ﬁght sequence: there’s little room for trial and error. But the degree of technicality varies. “It ranges from choreographing every breath and ﬁngertip to simply making sure the actors are clear on the boundaries,” she says.

When Salgueiro ﬁrst worked with Somers last year on the set of Netflix’s superhero series Jupiter’s Legacy, she had a remarkably different on-set experience. “I absolutely knew where my body would be, where my partner’s body would be, how long we would be holding each position and where I felt comfortable with my scene partner touching me,” she says.

On the set of another Netflix show, Designated Survivor, Somers established a safe word that Toronto-based actor Liz Whitmere could use if she needed time to regroup. “When my pasties fell off and got lost in the sheets or adhered to my scene partner’s chest, I knew Lindsay was watching the monitor to ensure I wasn’t overly exposed,” says Whitmere. “The pre-negotiation of the scene meant that, even though I was unexpectedly exposed, I didn’t feel exploited. The crew held privacy positions with their backs to us and the camera pointed to the ceiling until we were able to get those pasties back where they belonged.”

Rather than inhibit actors’ performances, intimacy coordinators inspire conﬁdence. “For the ﬁrst time, I got to explore the question of, ‘How do these characters physically communicate love for one another?’ ” says 32-year-old Ian Quinlan, who also worked with Somers on Jupiter’s Legacy. “As a man, I would never have been comfortable enough to ask my scene partner, ‘So, how do you think these two have sex?’ Thankfully, we had Lindsay there.”

Somers and Hudecki have already worked on 30 productions in 2019. “ ‘Consent’ isn’t a bad word,” Somers says. “Sometimes the word ‘no’ is the gateway to creativity.”

This article appears in print in the April 2020 issue of Maclean’s magazine with the headline, “Sex scenes go granular.” Subscribe to the monthly print magazine here.