Nervous at first about having kids, she was a hands-on mom. Working at a bridal shop, she planned for her own big day. 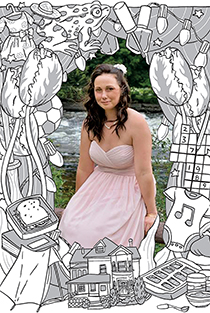 Shannon Amy Guy was born on July 23, 1989, in Peterborough, Ont. Her mother, Catherine, was a health care aide and father, Ted, worked in a camera store and part-time as a radio DJ. She was a happy-go-lucky child, but could also be strong-willed. When she was three, then living in Ottawa, her parents were expecting a second child. Shannon was upset that she had to stay with her grandmother, rather than be with her parents at the hospital. When her grandmother briefly stepped outside, Shannon ran to the door and locked her out. After hours of negotiating, Shannon finally let her back inside.

She was excited when her new baby brother, Chris, came home. “Sometimes, I would go into the room and find her in the crib with him because she just wanted to play,” Catherine says. Less than two years later, Shannon got a sister, Carolyn. “She liked to help dress them. She liked to help change the diapers,” Ted says. “She was like a little mother to them.” The family moved to Carleton Place, west of Ottawa, in 1996, where Shannon played cops and robbers with her brother and went frog-catching with her sister. She would also persuade Chris to play dress-up. “I’m pretty sure she painted my nails a couple times,” he says.

In 2000, at the age of 10, her parents separated. Shannon took the news hard. Living with their dad full-time, Shannon made sure her siblings had their lunches when they left for school and she would walk them home every day. She became a voracious reader and, at 12, gave her dad a copy of Harry Potter and the Philosopher’s Stone. With the release of every new Harry Potter book, they would buy each other a copy. Same went for the premiere of every Potter movie: “That was our date,” Ted recalls.

Shannon loved studying drama in school. In a Grade 8 musical, she played the role of Ed Sullivan and spent hours with her grandpa learning how to say, “A really big show.” While Shannon didn’t take a liking to high school, she made a close friend, Diana Gillis. The two were inseparable and played Sudoku so often that teachers would slide Shannon that section of the newspaper each day. Shannon had a large group of girlfriends and was known for her high-pitched laugh. “It was very contagious,” Diana says. “You could not listen to that girl laugh without bursting out yourself.”

After graduation, Shannon moved back to Ottawa to study community and justice services at Algonquin College. In February 2009, on a trip back to Carleton Place, she was at a bar with friends when she met Diana’s cousin, Paul Guy. The two started chatting and hit it off. After three months, they were inseparable. Shannon was at his place so often it seemed like she was living with him, Paul says. A month later, she was pregnant.

Shannon found work at a group home in Carleton Place, where she would help teenage girls who had lost or were taken away from their parents. But she was scared and nervous about having a child herself. She and Paul spent every free moment together planning for the baby, and were engaged in December of that year. A month later, Shannon called her mother to wish her a happy birthday when her water broke. The family rushed her to the hospital where she went through 41 hours of labour. “It was the 14th when her water broke,” Catherine says. “It was the morning of the 16th when they finally did the C-section.” Paul and Shannon named their daughter Kaydence.

Shannon was a hands-on mom who always made baby food from scratch. Staying at home with her baby, she became a fan of the TV show Say Yes to the Dress and later found work at Sinders Bridal House. “I got to hear the Bridezilla stories when she came home,” Paul says with a laugh. In January 2013, the couple had their second daughter, Harmony. All the while, Shannon was planning their wedding for the fall of 2014. When Paul’s father became seriously ill, however, they fast-tracked everything and were married in August.

On Oct. 15, Shannon and Paul left for their honeymoon in Mexico. When they arrived at the resort in the Mayan Riviera, they were upgraded to the honeymoon suite. The following evening, on the suite’s balcony, Paul was taking a photo of Shannon with two Canadians they had met over lunch. As he walked over to show them the pictures, the glass panel along the balcony railing gave out. Shannon fell three storeys to her death. She was 24.