Shelter in the shadow of the golden arches

For many people, McDonald's is the most reliable shelter on cold winter nights—a symptom of the failings of Canada's housing and shelter networks 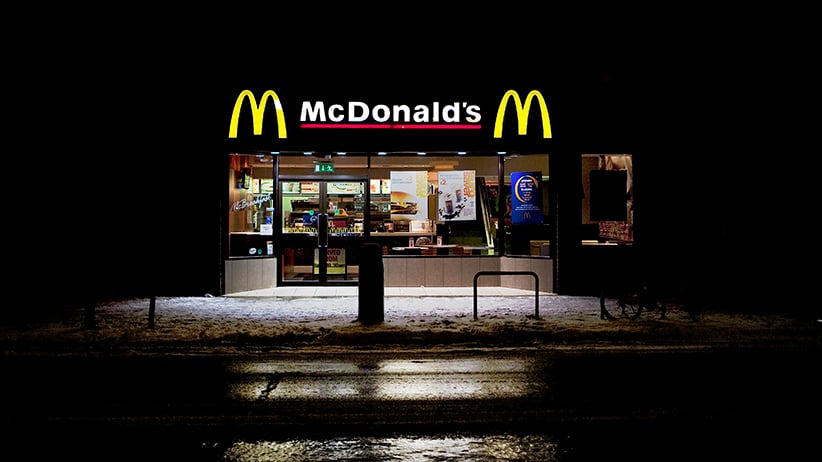 A McDonald’s at night. (Getty Images)

It’s midnight and minus 12 outside. Yellow arches and yellower cheese squares are beaming on the menu. Milkshake smell is in the air, and vegetable oil glosses the tables, but ordering food or drink is a convention that many guests can’t afford to observe.

“I’m just here to stay warm,” says Richard Dionne, 56, who has lived on the streets of Ottawa for three months. He is hanging out at 2 a.m. on a Tuesday at a McDonald’s on Rideau Street. “Between midnight and ﬁve in the morning, McDonald’s is basically sheltering the frigging homeless,” he points out.

In winter, Canadians without homes are turning to the home of the Big Mac, pointing to acute shortcomings in housing, income assistance and shelter networks. People with no ﬁxed address will sit and read books or newspapers for hours, chat or simply sit in the restaurants. At the location on Rideau Street, before other customers complained, homeless people sometimes slept at the tables.

The Liberal government has vowed to halve homelessness across Canada, but still the number of homeless people (estimated at over 230,000) is two and a half times the workforce of McDonald’s in the country. Some franchises are trying to crack down on loitering, but they stay open 24 hours because night shifts are some of the most proﬁtable hours for sales. And for the poorest people in downtown Ottawa, the fast-food restaurant, roofed with headachy lights and 26 surveillance cameras, is the homiest place they’ve got.

READ: Why Calgary’s 10-year bid to end homelessness was a valuable failure

“Thank God for McDonald’s,” says Dionne. “It has saved people’s lives when it’s minus 40 outside and they have nowhere else to go.” He says it saved his own life during a cold spell in early January. “I have to give kudos to frigging McDonald’s for picking up the slack where the government slacked off.”

A television in the restaurant broadcasts a town hall with Justin Trudeau, whose government made a campaign promise to create a national poverty reduction plan. “Some people who are homeless will stay in a McDonald’s at night even if there are emergency services available like shelters, often for very good reasons,” says Stephen Gaetz, a professor at York University and director of the Canadian Observatory on Homelessness. “They might be worried about getting sick and might not like being warehoused with a bunch of other people.”

Shelters often don’t permit people with dogs or other pets, and require couples to split up based on gender. One McDonald’s-goer, James, says he was court-ordered to live at a shelter but wants to avoid other drug users while ﬁghting his own addiction. So he spends the night at McDonald’s, sipping Coke and coffee because the dispensers had no more Fruitopia. “I can just sit and be normal,” he says, despite a sign noting a 20-minute seating time limit.

The ﬁve to eight staff who work night shifts on Rideau Street tend to turn a blind eye to the homeless who loiter. One employee, who said he was not permitted to give his name, previously allowed people to sleep in the restaurant until 6 a.m., but customers complained. He says the bathrooms are also now locked at night.

The issue is not unique to Ottawa. A franchise in downtown Toronto, for example, is similarly busy on a frigid weeknight, and people who work with homeless people in Vancouver are familiar with the McDonald’s habit. The head ofﬁce of McDonald’s Canada did not respond to multiple requests for comment.

Staying open 24 hours is proﬁtable largely because of customers coming in from the bars. The store on Rideau Street did $356 in sales between 1 and 2 a.m. on a recent weeknight, more than any of the hours between 6 a.m. and noon, and the store does around $4,000 in sales in a busy night.

“I’m throwing out all your s–t!” yelled a man to a woman inside the franchise that never sleeps. He punched the window from outside and later returned before two policemen arrived (the franchise also contracts Shield Security Services).

“I wouldn’t say you get a good night’s sleep here,” says Dionne, who used to try for some shut-eye at the tables, “but people die sleeping outside.” During cold days, many homeless also sleep and spend time at public libraries. In fact, librarians in Vancouver have begun helping people ﬁnd doctors and apply for social assistance, which is $710 for a single person in British Columbia, and $11 more in Ontario.

“What we desperately need is investment in social assistance set at people’s income levels,” says Trish Garner of the B.C. Housing Coalition. When libraries close, people don’t even have places to use the washroom. Shipping containers are being converted into houses in Vancouver, but Garner says the province needs to build 10,000 units per year. Most neighbourhoods, meanwhile, don’t want affordable housing built in their backyards. “Really horriﬁc things are being said publicly about homeless people that we wouldn’t allow to be said about anyone else,” says Garner. In reality, one-ﬁfth of homeless people in the city are employed.

Dionne used to be a cab driver in northern Ontario, but he became addicted to alcohol and his relationship fell apart. He has a 14-year-old daughter whom he no longer sees. At McDonald’s, “you meet people and talk, if you’re lonely or something like that, especially during the holidays.” McDonald’s is where he goes at night. It’s even where he went on Christmas Day.