Giving and artistic, she wouldn’t pass a busker without offering a donation. A fearless streak made her a natural circus performer. 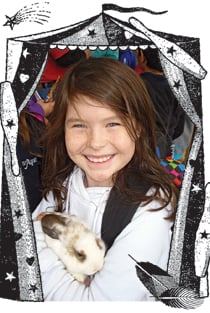 Shiyloh Isobelle Hill was born on Oct. 21, 2002, at 3:36 a.m. in the living room of her parents’ apartment in Peterborough, Ont., surrounded by friends and family. With the aid of three midwives, her mother, Patrice, an artist and musician, spent 10 hours in excruciating labour. Her father, Daniel, an art instructor, cut the umbilical cord. “It was a very sweet time in our life,” he says. “You know that concept of love at first sight? I really experienced that with her.”

She was a large baby, weighing in at nine lb., 14 ounces. Her mother described her as an “old Native woman.” “She’s mostly Irish, but her dad is half Onondaga. She came out with long black hair and black eyes,” which eventually turned a piercing blue.

At the age of two, Shiyloh became a big sister to a brother, Bezzi. The two of them were never apart for long. They would make up their own stories and adventures, drawing inspiration from their favourite manga, a type of Japanese comic book, whose storylines appealed to Shiyloh’s sense of adventure. Like her parents, she had an artistic streak, and she was drawing as soon as she was old enough to pick up a pencil. An avid reader, she devoured the works of Roald Dahl, from Fantastic Mr. Fox to James and the Giant Peach.

She was also a fearless child. Daniel recalls an instance when Shiyloh was with her mother and they met a homeless man by the name of Tiny. “Tiny was an enormous bearded man,” he says. “She just went up to him and struck up this beautiful conversation. When Patrice said she shouldn’t be talking to strangers, she said, ‘No mommy, he’s a good person.’ ” Her mother says they couldn’t pass a busker without Shiyloh asking her parents to make a donation.

Daniel’s art career meant a lot of travel for the Hill family—who lived first in Haliburton, Ont., and then Hamilton, following the thriving arts scenes. They also spent time on the Six Nations of the Grand River reserve and in Brantford, Ont., to be closer to family. In 2007 they travelled to American Samoa, in the South Pacific, to work with an organization called Youth With a Mission, where they volunteered in schools and with at-risk youth. Shiyloh turned five there, and her parents gave her money for presents, but she refused to keep her gifts. She bought toys for the local kids, including Barbie dolls for two sisters who had been sharing a single doll between them. “She wouldn’t hear anything else. Her mind was made up,” says Daniel.

Last year, Daniel and Patrice separated. Although her parents were going through a hard time, Shiyloh remained upbeat and a force of positivity in the households, always quick with a smile. “She was insistent on making the place she was in a peaceful space,” says Patrice. A month ago, Daniel was renewing his licence and decided to become an organ donor. Shiyloh asked her dad about it, and he explained that when you die you can give your heart and lungs to someone who needs them. Later that week, she asked her mother more about it. “Shiyloh said, without passing a beat, that she wanted to do that. She said she wanted to save someone’s life.”

After Shiyloh finished Grade 5 at Major Ballachey Public School in Brantford last spring, she spent the summer going to numerous camps. Her favourite was a circus camp, hosted by the Brantford Arts Block. For two weeks, Shiyloh was taught by members of Cirque du Soleil, learning everything from how to swing on the trapeze to how to juggle. She was a natural. “Shiyloh told one of the coaches that she felt more comfortable in the air,” says Debra Brown, a Cirque du Soleil choreographer and director of the camp. Shiyloh was always adding her own creative flourishes to the routines—making up new poses and giving them names like “peaceful warrior” and “fallen star.” Brown says Shiyloh chose to be a hunter character at the end-of-camp show, because “someone had to protect all the other characters.”

On Aug. 17, Shiyloh was playing with her brother and godsister, Leora, in her room on the second floor of her house. It was a hot day, so she opened a window. As she leaned against the screen, it gave way under her weight. Leora tried to grab her, but Shiyloh slipped out. She died with her mother and her brother sitting by her side. After 20 minutes, paramedics were able to restart her heart, but she was already brain-dead. She was kept alive long enough that her heart, liver and kidneys could be donated. She was 10.