Should the NHL change its approach to marijuana after legalization?

Cannabis is not on the NHL’s list of banned substances, but that doesn’t mean it’s officially condoned 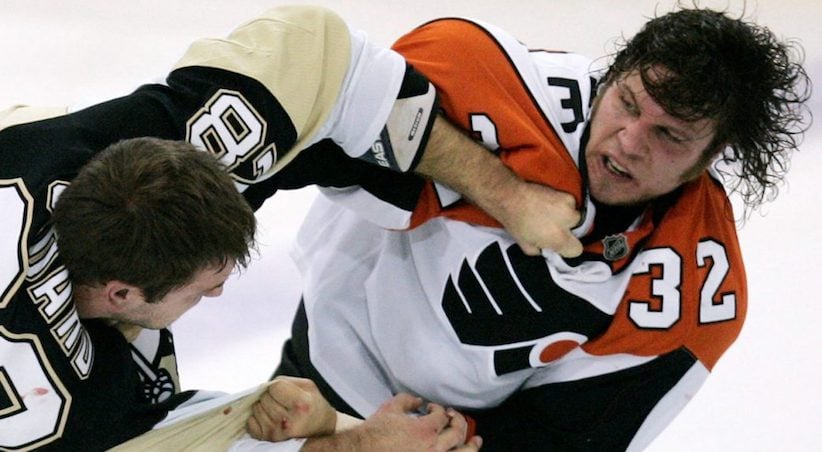 Riley Cote broke the rules constantly throughout his career with the Philadelphia Flyers. He scored just one goal and six assists in his 156 NHL games. But as an enforcer, Cote’s success was measured in infractions, and by that standard — with more than 50 fights and 411 penalty minutes — he did just fine.

It was a short career, but one Cote wouldn’t have had at all if he wasn’t willing to throw punches with some of the toughest players in the league. And like many of the players he went punch for punch with, his trade caused him an enormous amount of physical and mental stress.

To deal with that stress, Cote turned to cannabinoids whenever he could.

“I’d quietly use it as an ally of mine. It helped me manage anxiety [and] pain,” he says. “There was no physical addiction. It just made me feel better.”

Since his retirement in 2010, Cote helped found Athletes for Care — a non-profit organization that advocates for holistic approaches to wellness for current and retired athletes. Today he says he was far from alone among hockey players in consuming cannabis products — even in leagues where the practice was outright banned.

“Good people break bad laws, I guess,” he says. “At least half of those guys [I competed with and against] consumed, and a fraction of those guys consumed regularly. Like, every day…. And that number is probably higher.”

While Cote’s estimate is anecdotal (and possibly hyperbolic, as some critics suggest), it does speak to a growing conversation about medicinal use of cannabis in pro sports.

Cannabis is not on the NHL’s list of banned substances because it isn’t considered performance-enhancing. But that doesn’t mean it’s officially condoned. It is one of many drugs players are tested for under the Substance Abuse and Behavioral Health Program, run jointly by the NHL and NHLPA.

READ: Should marijuana continue to be a banned substance for athletes?

According to Cote, a player who tests positive for a hard “street drug” such as ecstasy or cocaine will likely have to enter the league substance-abuse program for about a month. But a player who tests positive for THC, the primary intoxicant obtained from cannabis, will only receive a call. Either way, the test results aren’t revealed publicly, whereas a positive result for performance-enhancing drugs would be.

That approach, Cotes says, keeps most positive tests for marijuana use under wraps.

“Nobody I’ve heard of has tested positive strictly for THC and been thrown in the substance-abuse program,” says Cote. (Otherwise, Cote adds, he’d have spent a fair share of his NHL days in the program.)

The NHL’s apparent blind-eye approach is considered to be more progressive than the more punitive regulations of the NBA and NFL, where players have to join a substance-abuse program for an initial positive test, and subsequent positive tests lead to fines and suspensions. (The MLB doesn’t subject its players to random testing for what it deems “drugs of abuse,” which includes marijuana.)

Recently, however, there have been hints at a shift in mindset from both the NBA and NFL. Former NBA commissioner David Stern recently said that he believes the NBA should allow medical and recreational marijuana use. And the Washington Post has reported that the NFL reached out to the NFLPA about studying the use of marijuana as a pain-management tool.

Cote hopes that those kinds of conversations continue as societal stigmas around the use of cannabis continue to wane.

Also, while Cote believes the NHL’s approach works to a certain extent, he says there needs to be more awareness, education and acceptance of cannabis use for pro athletes. He argues that cannabis can be used in conjunction with other health inactivates to help people suffering from chronic pain, concussion symptoms and mental health issues.

READ: Why doctors don’t want to be the gatekeepers of medical marijuana

In the NHL, Cote knew other enforcers who would lay awake the night before games, dripping in sweat, worrying about their next fight. Many, he added, would turn to alcohol as a coping tool. But Cote says his cannabis use helped temper those anxieties.

“We’re not selling the silver-bullet, magical cure for all,” he says. “[Cannabis] is a tool and it needs to be treated with respect…. It’s all about increasing quality of life. It’s about helping these guys wake up the next morning, where they can feel functional enough, good enough, [that] they can enjoy their family and not worry about the pain and anxiety — that vicious cycle that generally leads to mental health issues.”

Down the road, Cote says he hopes to see the NHL and NHLPA stop testing for cannabis and instead embrace the benefits of it as a natural alternative to addictive painkillers.

It’s not that wild a notion.

With the legalization of marijuana in Canada coming in July 2018, the NHL and NHLPA will have to address the question whether to allow the drug to be used to help treat pain for players north of the border, Jonathan Weatherdon, the director of communications for the NHLPA said in an email.

“This is [something] the sides will need to discuss this season,” Weatherdon says.

Cote will be waiting for the results of that discussion. And, if his numbers are right, so too will a large group of current NHLers.