Sir David Attenborough takes to Netflix to wake up the world

After guiding us through close encounters with wildlife for over six decades, in 'Our Planet’ he sounds the alarm 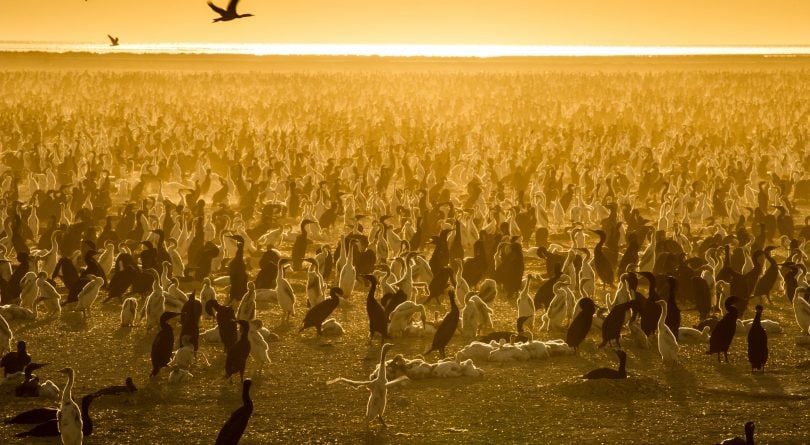 A dust storm blows in over a colony of Socotra Cormorants, endangering their chicks (Ben Macdonald/Silverback/Netflix)

The voice on the line from London is unmistakable. With a woolly timbre that sounds as old as England, and an emphatic cadence that swoops from childlike wonder to sage authority, it’s the voice of Sir David Attenborough, television’s most trusted wilderness guide. He’s phoning from the U.K. I’m on vacation, taking his call in an adobe bungalow overlooking California’s high desert on the edge of Joshua Tree National Park.

“You lucky chap!” he says. “Is that where you are at the moment? I wish I were with you! Have you seen any scorpions? Rattlesnakes?”

“Go out tonight with a torch!”

It’s tempting to spend my brief audience with Sir David quizzing him on the fine points of luring vipers out of the dark, but there are more pressing things to talk about. Namely the future of the planet—and Our Planet, a new series that presents astonishing footage of exotic animals on the verge of extinction as their habitats are being destroyed.

READ MORE: The best way to save nature? Do nothing.

Attenborough has been guiding us through close encounters with wildlife for over six decades, notably in the blockbuster BBC series that include Life on Earth, The Living Planet, The Blue Planet, Planet Earth and Frozen Planet. He’s made the planet franchise. He just writes and delivers the off-camera narration, but his voice—the only human one we hear—envelops the breathtaking visuals with an intense signature. Whether it’s an armada of snakes chasing a baby iguana or a penguin chick shivering in a blizzard, Attenborough’s play-by-play commentary has always delivered high drama and pathos, buffered by a gentle wit and a comforting measure of reassurance worthy of a bedtime story.

This series marks a departure. In the past, he has been criticized for downplaying environmental issues and arguing that “alarmism” would turn off viewers. But with Our Planet, this broadcasting legend, prolific author and eminent naturalist is calmly declaring a state of emergency. The opening episode sends us to bed with this stark warning: “The stability that we and all life relies upon is being lost. What we do in the next 20 years will determine the future of all life on Earth.” With the acceleration of the climate change crisis, Attenborough felt he had to change gears on his classic formula. “The issue,” he says, “has become more and more urgent. When I started making natural history documentaries, it never occurred to me or anybody else that human beings could seriously damage the natural world. We realized that human beings shot animals but that was about it. Gradually we came to realize we were changing the world in a profound and catastrophic way.”

RELATED: Climate change can be deadly if you live alone

The trailer for Our Planet ends with a telling slogan—“We’re all on the same team”— driven home by a shot of an orangutan gazing at us with a sophisticated air of intelligence that makes America’s famously orange president seem like a lesser primate. The tagline makes us rethink the way we talk about our planet as if it belongs to us, though it includes countless species. And it challenges the notion of human supremacy, which is a short leap from white supremacy and America First chauvinism. “We are undoubtedly the most powerful species on the planet,” says Attenborough, “and by some aberration we can destroy things in an unprecedented way. There is disaster on the horizon and those of us involved making programs about the natural world have a moral responsibility to say something about it. That’s why this series has some consequence.”

Aside from its bracing change in tone, Our Planet breaks new ground as Attenborough’s first Planet series not produced by the BBC—but by Netflix, the apex predator now transforming the ecology of entertainment. That’s no coincidence, according to Keith Scholey, who produced the series with Alistair Fothergill and has worked with Attenborough for 36 years. “We wanted to make another global landmark series,” says Scholey, “but we also desperately wanted to do something about the rapid and alarming degradation of nature—a piece for our times. The problem with making a series for television is that it’s there one day and gone tomorrow. You need to have a platform that is there all the time, and to reach as many people as possible as quickly as possible. With Netflix, you can hit 190 countries in one day.”

Available on the streaming platform on April 5, Our Planet is a nature series of unprecedented scope and scale. Four years in the making, its eight one-hour episodes split the natural world into key biomes or habitats—jungles, forests, grasslands and deserts, coastal seas, high seas, fresh water and frozen worlds. We see things no one’s ever seen before. Arabian leopards mating. African cheetahs hunting in packs. A black bird of paradise performing a mating dance in the Borneo jungle, its blue eyes turning brilliant yellow as it spins its feather skirt like a mad ballerina.

READ MORE: It’s time for climate-change defeatists to get out of the way

While dazzling us with nature’s diversity, the narrative shows how it all hinges on how the biomes interlock—desert sandstorms fertilize the sea and nourish the krill that feed shoals of anchovies, which feed schools of herring that are chased to the surface by dolphins to be hunted by dive-bombing cormorants. And as climate change upsets the balance of nature, unnatural things happen. In Russia’s Arctic, driven ashore by the loss of sea ice, thousands of walruses clamber over each other on a beach, while dozens topple to their death from a cliff as they try to get back to the sea.

Our Planet employs time-honoured narratives of tragedy and comedy, horror and romance. And the centrepiece of each episode is usually a suspenseful duel between predator and prey, with Sir David following the action like a hushed golf commentator. More often than not, the predator walks away hungry—a disturbing sign. “The apex predators are the most vulnerable,” notes Scholey. “They’re the ones that go first.” The producer says that the greatest challenge of the series was to create a coherent story that balanced the beauty of nature with the peril it’s facing.

Attenborough’s voice is where sermon and spectacle meet. “In the space of just one human lifetime,” he declares in the first episode, “wildlife populations have declined on average by 60 per cent.” A recent essay in the New York Times titled “Time to Panic” argued that panic is the only rational response to catastrophic climate change—and cited Attenborough as a sober voice who has embraced that notion by telling December’s United Nations Climate Summit, “If we don’t take action, the collapse of our civilizations and the extinction of much of the natural world is on the horizon.” Yet in Our Planet, Attenborough expresses a strategic optimism: “With our help the planet can recover. Never has it been more important to understand how the natural world works and how to help it.”

RELATED: Canada’s climate shift will require everyone to get on the same page

Saving the world from catastrophe is a far cry from the romantic vision that first inspired Attenborough as a 10-year-old boy. In 1936, he attended a lecture by the legendary Grey Owl, a.k.a. Archibald Belaney, the Englishman who changed his identity in the Canadian bush and passed himself off as an Indigenous trapper. “He had a feather in his hair and a ponytail and buckskin with fringes,” he recalled. “You were absolutely amazed because this was a man from the wild talking about terrible things that human beings were doing to loveable things like beavers. It made a tremendous impression on me.”

Attenborough has devoted his life to encouraging empathy with wildlife. He was tapping into the emotional intelligence of animals long before it was scientifically fashionable, showing how they are more like us than we ever imagined. After 10,000 years, humans have become Earth’s super apex predator. We’re the ultimate invasive species, with the power to destroy the natural world, and perhaps to rescue it. Our Planet brings humanity into intimate contact with wildlife on an epic scale. It concludes each episode with an activist nudge. But its sheer power of enchantment—arousing our empathy with animals, and fear for their survival—may be the key to saving our own endangered species. 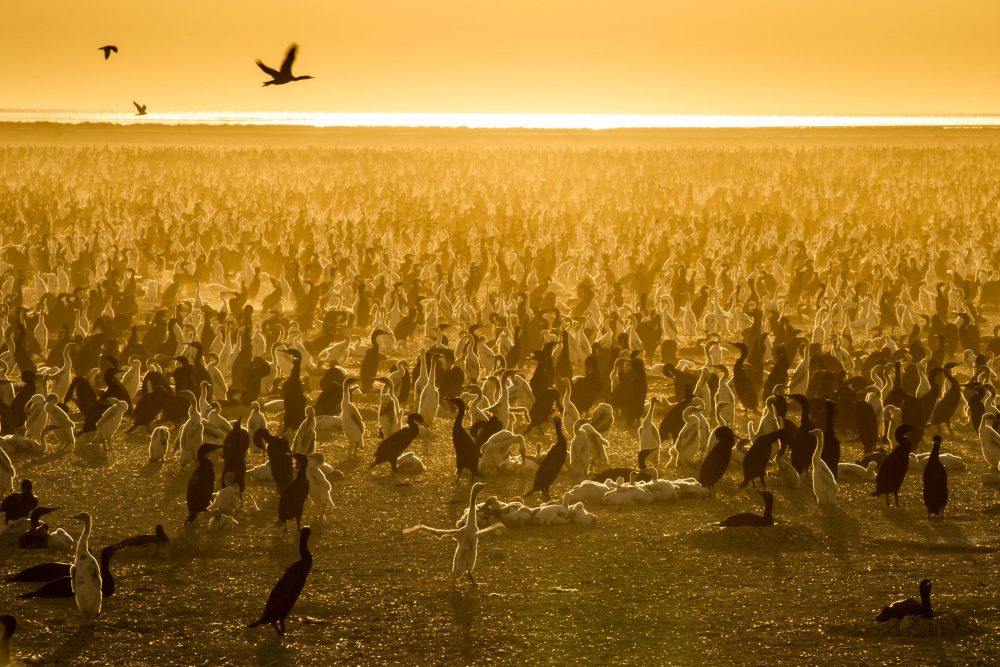 A dust storm blows in over a colony of Socotra Cormorants, endangering their chicks, which often wander out, lost, into the desert and perish in the heat.