When Anne Marie Cerato was 30 years old, she went to the doctor to check out a bump on her collarbone. “I don’t think it’s anything serious,” the doctor told her, but to be sure, he ordered an X-ray. It revealed a “shadow.” That led to a CT scan, that warranted a biopsy, that landed Cerato back in the doctor’s office to find out the results. That was on April 15, 2009. “I’ll never forget,” says Cerato from her home in Toronto. “He said, ‘I’ve never seen this in anyone your age. I’m really sorry, but you have lung cancer.’”

Cerato couldn’t believe it. She had never smoked. She hadn’t been sick. She ate well and exercised. She was young. “I looked around the room because I thought someone was playing a really bad joke.” But there was just Cerato, her mother and the doctor, and no one was laughing. “You go through your life script and think, what did I do wrong?” she says. But there was little time to wonder about what started the cancer, only how to stop it. “I was quickly sucked into the whirlwind” of treatments, including chemo, radiation, surgeries and experimental therapies.

Seven years later, Cerato lives with incurable lung cancer. But for the last four years she has been taking a relatively new type of drug that suppresses a particular gene mutation she carries that causes cancer to grow and spread—and for most of that time, Cerato has been, incredibly, free of tumours. “I pretty much live each day as it comes. Every day I wake up is a good day, even if it’s not,” she says. “Being young with cancer is one thing. Being young with lung cancer is a very different thing. It’s even more isolating because there aren’t very many of us.”

Indeed, the vast majority of new lung cancer cases are among the middle-aged and elderly, according to the Canadian Cancer Society (CCS), which estimates that last year there were 25,900 new cases in people over age 49, compared to 765 new cases among younger people. Lung cancer has also long been a disease of the nicotine-addicted. Smoking is related to 85 per cent of lung cancer cases and 30 per cent of all cancer deaths. Lung cancer is, in fact, the most deadly form of the disease, killing more Canadians every year than breast, colorectal and prostate cancers combined.

But as smoking rates have declined over the last few decades across all age groups—just 15 per cent of adults over age 25 smoked in 2013, compared to almost one-quarter in 1999, and the decrease is even more dramatic among youth and younger adults—so too has lung cancer mortality dropped. Since the lung cancer death rate was at its highest ever in 1988, more than 23,000 deaths have been prevented, according to the CCS.

The positive reversal has led scientific researchers to broaden their attention toward another phenomenon: lung cancer among former smokers and never-smokers such as Cerato. “The epidemic has changed,” says Rayjean Hung, a leading epidemiologist at Mount Sinai Hospital and a professor at the University of Toronto. “We have passed that peak for lung cancer caused by tobacco smoking in North America.” Now, work is under way to understand what other factors might be at play in lung cancer, says Hung, including “inflammation, previous lung diseases, family history, genetics, pollution. It remains a very important public health issue.”

Among the most promising advancements to come of this concerted research effort is a growing understanding of how lung cancer in smokers versus never-smokers is, in fact, “thought to be a different biological disease,” says Martin Tammemägi, another prominent epidemiologist and professor at Brock University in St. Catharines, Ont., “that has different mutational patterns and responses to treatment.” Some never-smokers may develop one of two gene mutations, EGFR or ALK, which occur in the lung tissue, says Hung. “This is not a mutation that you inherited from your parents.” Other mutations are being studied, as well as why they occur in some people but not others. 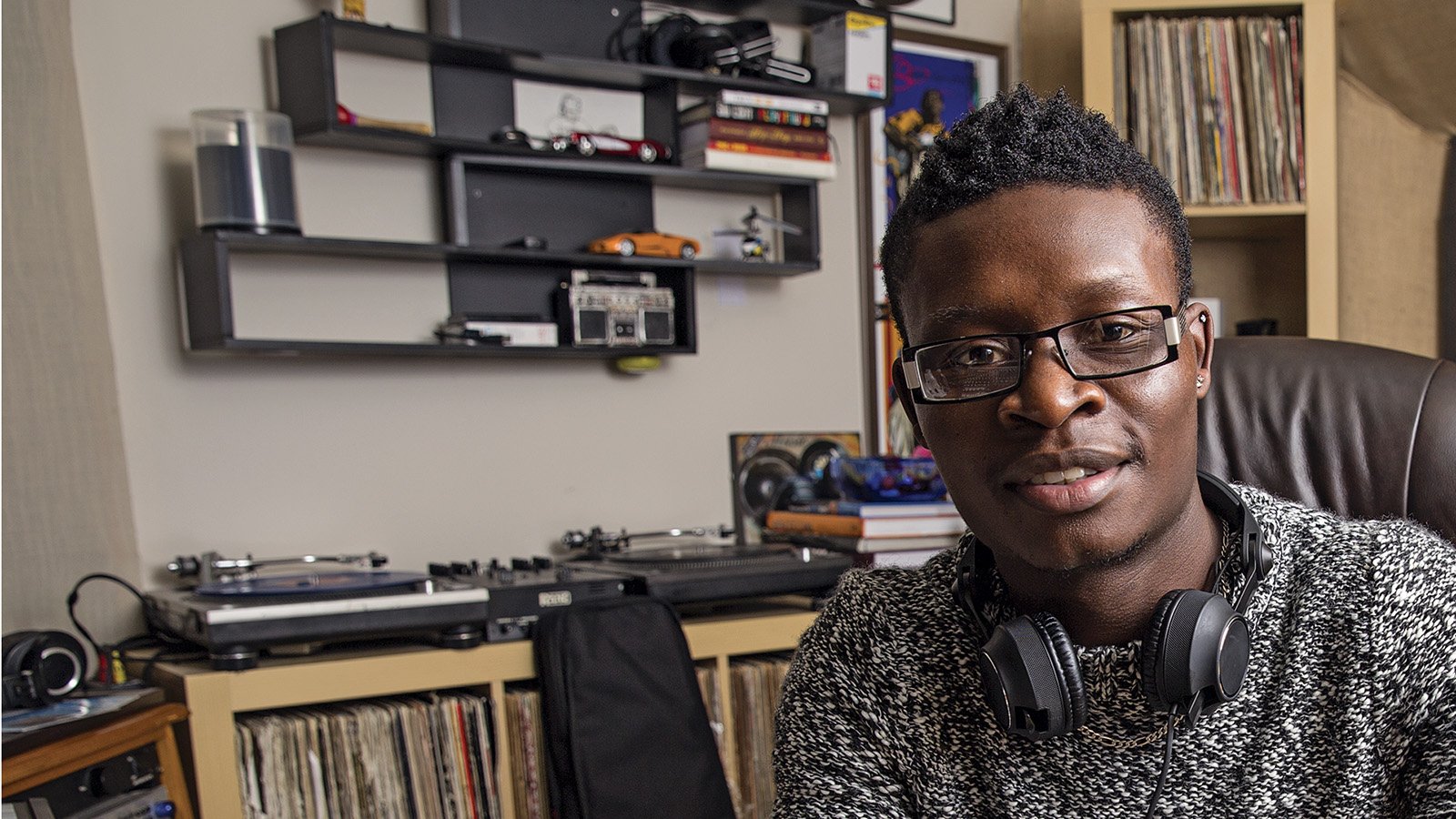 Joseph Neale photographed in a recording studio on November 27, 2015. (Photograph by Kayla Chobotiuk)

This has led to the development of targeted-gene drug therapies that reflect a gradual shift toward personalized medicine, and that have significantly enhanced the treatment options available to patients. “What’s great about those drugs is they’re tablets, they have few side effects, they’re easy to take, they are twice as likely as chemotherapy to shrink the cancers, and the beneficial effects are likely to last at least twice as long as chemo,” says Paul Wheatley-Price, chair of the medical advisory committee of Lung Cancer Canada, and an oncologist and professor at the University of Ottawa. “It’s amazing.”

In the years since Cerato was diagnosed with lung cancer and began targeted therapy—she has the ALK mutation—the disease has failed to thwart life’s most gratifying rites of passage: she has travelled extensively, fallen in love and recently got married. Now Cerato and her husband just bought a house in Toronto. “I’m doing all these things that I really thought I would not get to do,” she says. She knows that there may come a day when current gene therapy might no longer work, when the tumours will have developed new mutations, although she hopes second-line treatments will be approved. Still, Cerato is relishing the time she has gained: “I didn’t think I’d see my 35th birthday. So it’s been a trip, that’s for sure.”

For Lynne Goudezeune, a family physician and married mother of two in Montreal, finding out she has incurable lung cancer at age 50 was a shock. “I was thinking something was bad. Maybe breast cancer, or maybe cancer of the ovaries. But lung cancer? Impossible,” recalls Goudezeune of the diagnosis she received in 2011, after scans of a bump on her sternum revealed cancer that had spread from her lung to her ribs and bones. “I never smoked. I never was with smokers. I eat well. I had no family history. I was [playing] sports on a regular basis. So lung cancer? Never.”

As it turned out, Goudezeune was one of the never-smokers who tested positive for the EGFR mutation—which would have made her eligible for targeted gene therapy too, except that her case is complicated. Goudezeune also has squamous cell carcinoma, which is usually only seen in smokers. “I’m a really strange case,” she says. With gene therapy ruled out, and chemotherapy proving ineffective, Goudezeune and her doctors sought a “compassionate treatment” not approved in Canada.

Since last May she has been receiving an immunotherapy injection every two weeks that stimulates her body’s ability to kill cancer cells. Her condition has “stabilized,” and Goudezeune is hopeful but realistic. “I wish that what I have now would be a chronic illness,” rather than a terminal disease, she says. “Something that we could treat on a regular basis, and that would permit me to live in quantity but also in quality.”

In this way, the story of lung cancer today hinges on the scientific discoveries of tomorrow. Hung established an international consortium of researchers from North America, Europe and Asia a decade ago that is still unravelling the risk factors for lung cancer in smokers and never-smokers. They are currently pooling data from approximately 30 studies conducted around the world to establish a comprehensive investigation of the genetic spectrum of the disease. “The genetics will tell you the biology, how did the lung cancer occur. Sometimes it points you to the specific exposure. It can also sometimes help point to more chemo-preventive or therapeutic targets if you disrupt the gene,” explains Hung. “Eventually, our hope is that we can predict who will be at the highest risk for lung cancer, and that can help with a screening program.” Screening is also a key focus for Tammemägi, who is heavily involved with efforts in North America to establish lung cancer screening programs for smokers—which, studies indicate, would reduce mortality by 20 per cent a year.

Early detection is what saved Joseph Neale, a young 24-year-old singer in Toronto. A never-smoker, he was diagnosed with lung cancer four years ago. A persistent cough and weight loss were his symptoms. Neale’s first thought after diagnosis: “Wow, my life is just beginning, and it’s almost ending.” When doctors recommended they remove most of his right lung, Neale was devastated, given his dream of performing. “If I can’t sing, I’m not living anymore,” he recalls saying. At the urging of his family, and upon learning that he would soon be a father, Neale agreed to surgery in 2012. Now, he’s free of cancer, and living an even bigger dream because of it. “We are working on raising $1 billion for lung research,” says Neale. He’s recorded an album released on iTunes, with an eye on singing at corporate functions, hospitals, schools, malls. “The first single is now at radio stations across the nation,” says Neale.

For people whose future relies on research, Neale’s goals may represent the possibilities ahead. “Where there is life,” says Goudezeune, “there is hope.”

Editorial note: On Jan. 18, 2016, Carolyn Gotay, a professor and director of the Centre of Excellence in Cancer Prevention at the University of British Columbia and the Canadian Cancer Society chair in cancer primary prevention, wrote to Maclean’s about the significance of radon exposure as a risk factor for lung cancer. “The Canadian Cancer Society estimates that 3,000 Canadians will die of lung cancer each year due to radon exposure. Radon is a naturally-occurring form of radiation found in rocks and soil in regions across Canada, and exposure through the air in enclosed areas increases the risk of lung cancer. The good news is that radon can be measured and remediated, yet 96 per cent of Canadians haven’t tested their homes for radon. This is knowledge we have already, and we need to act on it — test your home for radon, get rid of it, and lower the lung cancer risk for you and your loved ones.”

For more information, check out Health Canada’s resources on radon and the Canadian Cancer Society’s awareness page on radon.