Canada's speed skating legend will race once more in Sochi, but it won't be for gold 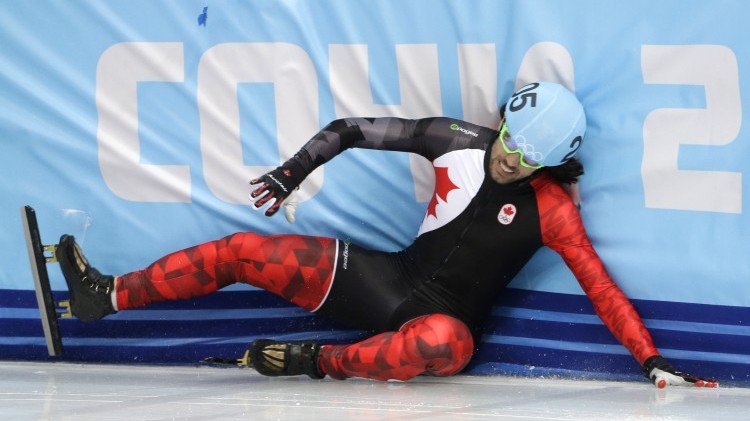 Charles Hamelin is leaned up against a white pole at ice level in Sochi’s Iceberg Skating Palace. He’s smiling a bit, now, because he just watched the women’s team win silver in short track speed skating’s 3,000 metre relay, just congratulated his long-time girlfriend, Marianne St-Gelais, on the third Olympic medal of her career.

Immediately after his 500 m heat, Hamelin picked himself up off the ice and rushed through the media gauntlet without talking to anyone. Then he cried. Then he asked himself, “why, why, why.” Now, though, after watching the women’s silver medal performance, his spirits are up. He’s ready to talk.

“I have no one to blame by myself,” he says, wearing grey sweatpants, a T-shirt and a Canada toque with a pompom. “I was in control…If I would redo the race, I would do exactly the same thing, because that’s how I race, and that’s how I win my races.”

Hamelin still doesn’t know why he crashed with little more than a lap to go, when he was comfortably leading his 500 m heat. “The ice just broke under my blades, or my blade slipped in the corner,” he says. “I cannot blame anyone other than myself…Bad luck.” The smile returns to his face when he changes the subject. “I want to remember [the relay] more than what happened in the 500.”

St. Gelais, though Hamelin doesn’t know it now, saw him crash. “No, no, no, no! That’s not true!” she’d said. But then she took a minute and she picked herself up. She was grinning by the time she got to the start line less than a half-hour later. She had to focus for her team.

And the ladies’ race was something else. The Italian team crashed out early, leaving just three teams—Canada, China and Korea—to battle for medals. Canada crossed third, but the Chinese team was disqualified, bumping the Canucks up to silver.

“We’ve been waiting a long time for this,” said a beaming Jessica Hewitt, an Olympic rookie, and the smallest girl on the team.

The Canadian team debuted a new skating race plan that saw Hewitt and Marie-Eve Drolet skate a few two-lap legs, saving St-Gelais and Valerie Maltais for shorter legs and for the finishing kick.

By the time she spoke to the media, St-Gelais was all smiles. She’s a ham. She jumped into conversations, grinned at cameras. She’s one of the most glowing personalities of these Games. And she didn’t just field questions about what it was like to watch her boyfriend go down a second time. She fielded them like a champ.

Hewitt didn’t watch the men’s 500 m heats, and she didn’t see Hamelin go down. She found out from media who asked about it. “He did?” Hewitt said. The silver medal smile disappeared. “Sh–.”

Hamelin doesn’t know if that’s the last time we’ll see him race for an Olympic medal. He has one more race in Sochi, but it’s the men’s relay B final, the battle for fifth.

For now, Hamelin will focus on that 1,500 m win, the fact he’s the only Canadian to ever win Olympic gold in the event. And he says he’ll show his strength at the world championships in a couple of weeks’ time.

And how. What a half-hour it was at the Iceberg. A silver medal, and a crash that rendered one of Canada’s most decorated Olympians completely gutted. Again.