Sofia and Carl Philip: The model of a modern royal wedding

Including sappy love ballads and a tattoo 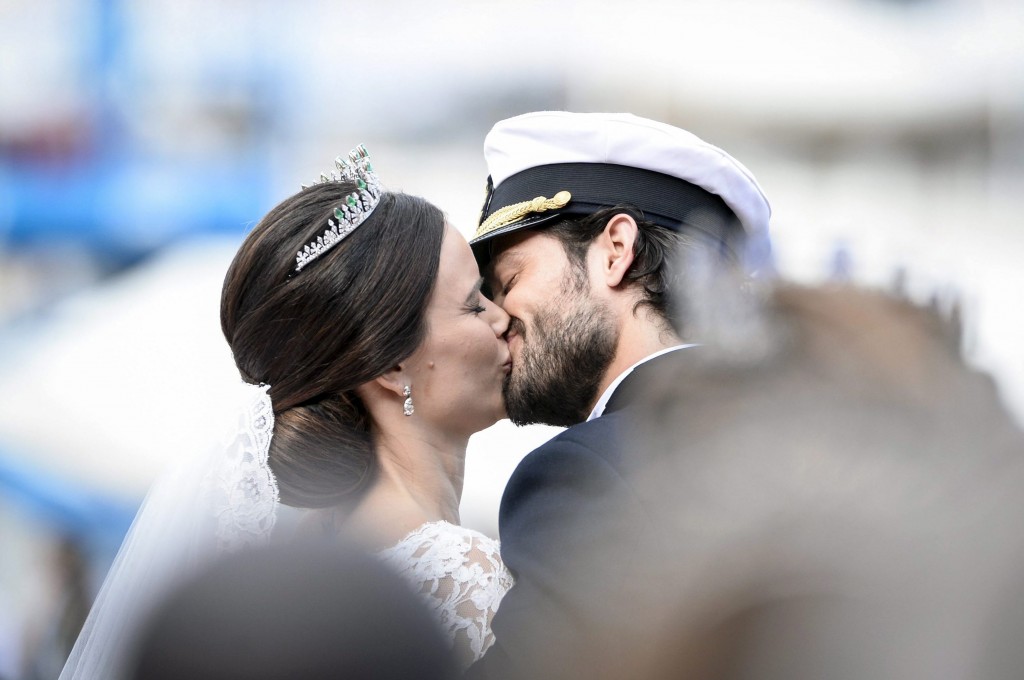 Sweden’s Prince Carl Philip kisses his bride, Sofia Hellqvist in a carriage, after their wedding ceremony, in Stockholm, Sweden, Saturday, June 13, 2015. The only son of King Carl XVI Gustaf and Queen Silvia has married his Swedish fiancee in a lavish ceremony in Stockholm. Prince Carl Philip and the former reality starlet and model Sofia Hellqvist, 30, tied the knot Saturday at the Royal Palace chapel before five European queens, a Japanese princess and dozens of other blue-blooded guests. The couple engaged in June 2014. (Pontus Lundahl / TT via AP)

Marrying into a royal family must feel a bit like a medieval trial by fire, such is the public attention, criticism and unwanted advice. Sofia Hellqvist, 30, went through a five-year inquisition before marrying Sweden’s Prince Carl Philip on June 13. She first came to notice in 2005 as a scantily clad contestant in a popular reality show, Paradise Hotel. Then she posed topless (well, she was wearing a snake) for a men’s magazine. And had a prominent tattoo in the middle of her upper back.  And let’s not dwell on her fondness for spray-on tans.

But, like all would-be royals, there was a princess makeover team that nudged her style into the sleek and graceful range. After studying accounting—nothing controversial there—she began volunteering for childrens’ charities, all while maintaining a smiling, non-committal demeanour as she and Carl Philip continued their relationship. That self-discipline and commitment was rewarded when King Carl XVI Gustaf gave his needed permission for the engagement. It also helped that she was seen to be a steadying force for the prince, who has a fondness for fast cars and wild parties. She was welcomed into the family, and quickly became a regular at public engagements. Heck, she even gots a sweet title: HRH Princess Sofia, duchess of Varmland, as well as what looks like a new tiara.

The King, Queen, Prince Carl Philip and Sofia Hellqvist at the dinner for the Nobel Laureates this evening pic.twitter.com/dXLkR3c5Gh — Royaltyspeaking (@Royal_talk) December 11, 2014

It was a glittering wedding at the Royal Chapel in Stockholm, but, for Sofia and Carl Philip, it’s really a big family wedding, with really, really fancy clothes and jewellery. The Swedish royal family is known for holding drop-dead formal weddings in the late afternoon: perfect for evening gowns and tiaras for women, while men wear white tails or uniforms. The Royal Order of Sartorial Splendor will have a complete fashion breakdown.

Best of all, virtually everyone who is anyone in European royalty comes to the party; after all, they are all related to each other. So it’s a wedding and family reunion rolled into one. With so many queens (many flying solo), crown princes and princesses, the protocol experts have their work cut out figuring precedence. Luckily, they’ve got lots of practice. Not only do the Swedes host the annual Nobel banquets, but the family has had a lot of weddings lately: Crown Princess Victoria got hitched in 2010, while Princess Madeleine wed two years ago.

While everyone is dressed up, the family nature of the ceremony stood out. Estelle, the three-year-old daughter of Victoria, was a bridesmaid. And while a nine-months’-pregnant Princess Madeleine slowly climbed the towering staircase to the chapel, her husband carried their squirming 15-month-old daughter, Leonore, who wore an heirloom outfit originally worn by Gustav VI Adolf. During the ceremony, she kept being handed down the line of royals until she was sitting in grandmother Queen Silvia’s lap.

There were tears—the groom nearly lost it a few times—as well as another Swedish royal wedding tradition: the live performances of sappy love ballads, this time it was Coldplay’s Fix You (no, the band wasn’t there). If that weren’t enough, there was a follow-up: a soft Swedish version of Rihanna’s Umbrella, though without the wet choreography. The wedding ended with everyone clapping to a gospel version of Joyful, Joyful, What Have You Done for Me Lately? (Disney: are you paying attention? If real royalty can choose pop songs at their nuptials, imagine the possibilities for your next animated feature.)

Sofia wore a classically beautiful lace dress. The official description is: The bride’s wedding dress, in three shades of white, was created by the Swedish designer Ida Sjöstedt. The dress is made from silk crepe overlaid with Italian silk organza. Couture lace made by José María Ruiz was applied to the dress and the train was hand-cut and then hand-stitched in Ida Sjöstedt’s atelier in Stockholm. It was cut just low enough in the back so as to show off the tattoo (screen grabs from SVT live feed of the wedding). 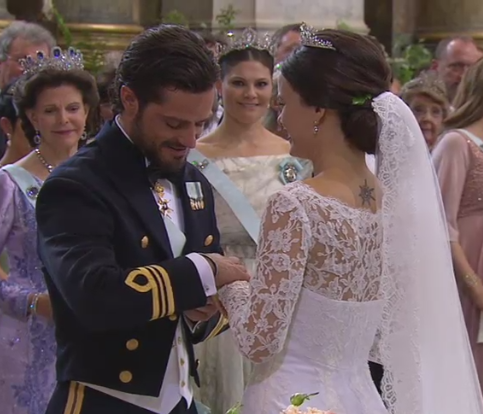 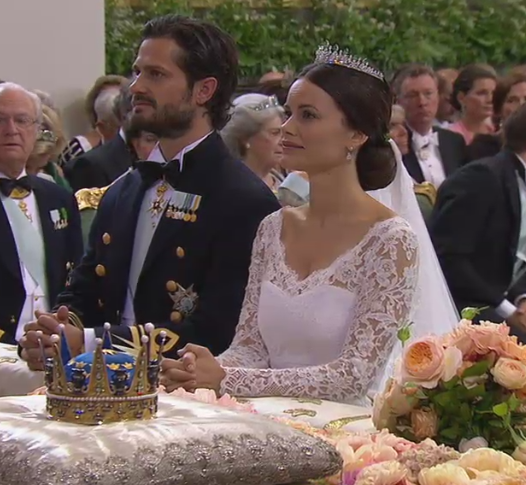 After the nuptials was a carriage ride through the Swedish capital, then back to the palace, where all their guests waited. There was a public speech, then dinner and partying late into the night. 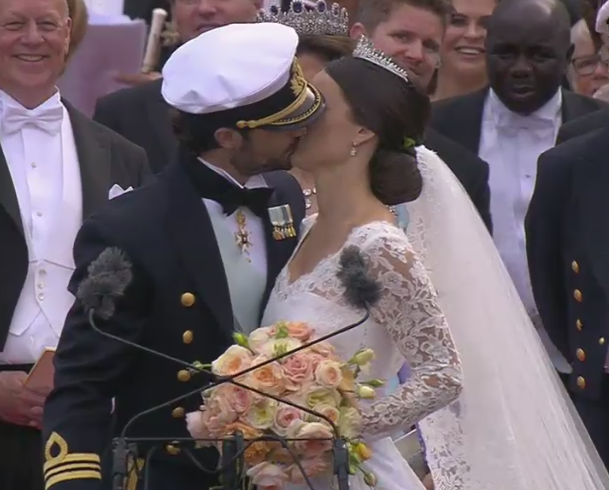