Steven Pinker: The world is getting better, not worse. Seriously.

But in his new book Enlightenment Now, Pinker warns authoritarian populism on the right, and repressiveness on the left, could thwart progress 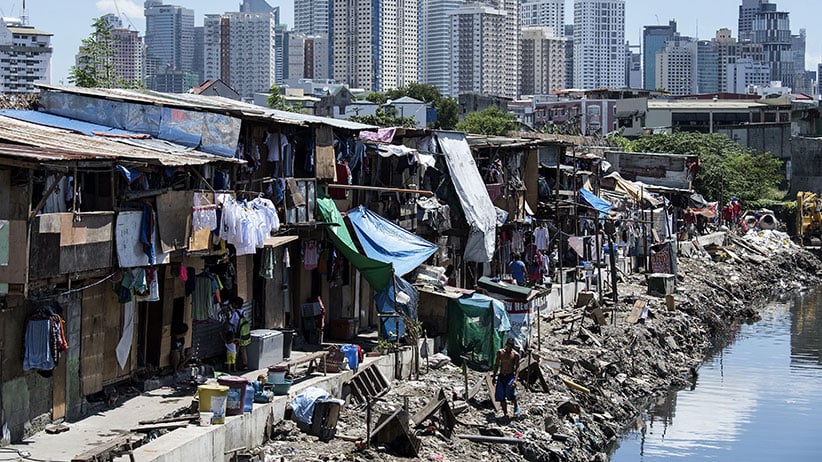 People living in a settlement walk about, as the skyline of Manila’s financial district is seen in the background, on August 17, 2017. (Noel Celis/AFP/Getty Images)

Montreal-born Steven Pinker, 63, began his academic career as a cognitive psychologist and psycholinguist, writing two technical books offering his theory of language acquisition. But if that aspect of his work brought him to a Harvard professorship, it’s his more numerous books aimed at a general audience that have made Pinker one of the best-known public intellectuals in the world. Most of his early popular titles presented research in psycholinguistics and cognitive science, much of them his own. In 2011, though, Pinker ranged far outside his own discipline with The Better Angels of Our Nature, surveying a wealth of data that he argued cumulatively showed violence in steep decline in the modern world—trends he rooted in developments that first arose during the 18th-century Age of Enlightenment.

Pinker’s conclusions were counterintuitive in many intellectual circles, to say the least, and Better Angels almost instantly became one the most controversial books of the 21st century. It was heaped with praise and awards by those who thought the statistics proved the author’s case, and strongly attacked by those who thought Pinker misunderstood or glossed over the true nature and extent of modern violence. Now, in his latest book, Enlightenment Now, Pinker has extended his investigation of violence to several other indices of human well-being, finding them all hugely improved. He not only ties those advances more tightly to the Enlightenment than before, but warns that the Enlightenment ideal itself—the commitment to science, reason and toleration—is under threat.

Q: This is a vast book, which ranges across large areas of human affairs, and demonstrates results that will be surprising and arguable to a lot of people. What prompted you, in terms of your own concerns about the state of things, to write it now?

A: It was in some ways a sequel to The Better Angels of Our Nature, which documented the many ways in which violence, when assessed quantitatively, was in historical decline. That was—still is—a fact virtually unknown other than to the experts who had actually documented the evidence. After publishing Better Angels, I began to come across other data sets showing that other measures pertinent to human flourishing had shown substantial historical decreases or increases, including education, poverty, disease, longevity, leisure time and safety. So I wrote this for the same reason that I was impelled to publish the first book— namely, these are important facts about human history that are not appreciated, but highly significant in terms of our understanding of the current human condition.

MORE: 7 charts that show why Canadian babies have it so good

Q: In some ways a sequel, then, but in other ways, is this a response to a particular political moment, to the days of Trump and Brexit?

A: Not precisely. I conceived the book when Donald Trump was still a national joke. But I came to realize that, more than ever, people want to know what it is that we should affirm if we’re not populists or nationalists or religious fundamentalists or reactionaries or fascists or communists.

Q: A good half dozen things you are not—I take it you were looking for something on the positive side as a descriptive?

A: There’s a real gap in our belief and value systems, even among many educated people who are not on those extremes. What exactly are we defending when we—those of us who are not Trumpists or European populists or fundamentalists—defend not just past beneficial developments but the ideas and values behind them all? When I set out to document those historical improvements I wanted to explain them too, and I identified the project of the Enlightenment—sometimes also called cosmopolitan liberalism or secular humanism—as the single most pervasive cause. It really is a coherent belief system and a coherent agenda for how we should deal with our problems. The data on human improvement vindicate this system of beliefs.

Q: You’ve written about how “incredulous” you were at some of the reactions to Better Angels, to your graphs and studies laying out the worldwide decline in violence. There are entire bodies of intellectual thought that don’t like what you’re claiming.

A: Indeed. I found that there is a pervasive assumption that to be a serious intellectual you have to be in a state of constant indignation and dudgeon about the state of the world, in particular Western institutions. Even pointing out obvious facts— lifespans are increasing, the developing world is climbing out of poverty, war deaths have gone down—is met with incomprehension almost. Some people are opposed to even conceding the use of empirical demonstrations. Those studies could have gone the other way, it could be that global poverty is increasing, though it happens not to be. It could be that death in war has been soaring, but in fact it has been plummeting. But many intellectuals commentators, educated people, are simply unprepared not just for the possibility that things might have gotten better but that we should even look to see whether that’s true. People mistake that work for optimism, rose-tinted glasses, looking on the bright side. It’s none of those, it’s just looking at facts.

Q: What kind of reaction are you getting this time around? More of the same?

A: It’s hot. It’s pretty polarized. There have been some spectacular reviews. On his website, Bill Gates identified it as the best new book he’s ever read—that used to be Better Angels. But there has been sniping as well, some of which does repeat incomprehension at the possibility that we can measure human well-being or that even if we could measure that, data isn’t proof. So I’m Mr. Sunshine or Dr. Pangloss. There’s so much reluctance to even look at the facts that they are virtually unknown. As [late Swedish international health expert] Hans Rosling points out, in polls that assess people’s judgment about which way the world is heading, humans perform worse than chimpanzees. That’s because chimps guess at random, and people, including many experts, are systematically and mistakenly pessimistic even on the most basic questions. Ask “Do you think that extreme poverty over the last 20 years has increased or decreased globally?” the majority of people answer that it has increased, and that’s just dead wrong.

READ: Remembering Hans Rosling: A truth teller in an age of ‘alternative facts’

Q: You’re saying that people are more pessimistic than they need to be about the world’s trajectory. Yet you still feel the Enlightenment project, its whole approach to human affairs, is under threat.

A: It always has been. No sooner did the Enlightenment appear than a counter-Enlightenment arose. At various times it’s been nationalism, fascism, religious fundamentalism, ideological blinkers, tribalism—they all pushed back against reason, skepticism, cosmopolitanism. Now I worry about authoritarian populism on the right, Trumpism and Putinism. I worry about illiberals on the left, the repression of heterodox opinions on university campuses and the repressive orthodoxy many universities are trying to impose. Both extremes are a threat to Enlightenment values—we need as many ideas as possible and we need an arena in which we can evaluate them. By the way, the more I look at the data, the more appreciation I have for our home and native land. Canada is doing pretty well in measures of human well-being like lifespan, health and education. All countries are going to have problems, but grade it on a curve and Canada comes out as a particularly impressive country.

Q: I would think it’s partly our commitment to the incrementalism you champion in your book. Step by step, brick by brick, not try to fix everything immediately.

A: Exactly, I think that’s quite right.

Q: There are a number of looming future problems, including artificial intelligence—the potential of which worries as much as it impresses many experts, Elon Musk for one—and climate change, that critics on the left associate with Enlightenment attitudes, including neo-liberal economics. How do you respond to that?

A: Climate change is our most serious issue, but it’s not a problem of neo-liberal economics. It was the Communist regimes that had by far the worst record for carbon emissions. Mao forced millions of peasants to set up backyard smelters, producing copious carbon emissions and zero economic output. There is a graph in the book demonstrating that Communist China’s carbon emissions were literally off the charts—I couldn’t even fit them into the graph without truncating the top edge. So yes, carbon-caused climate change is a problem, but not one of free-market economies.

Q: Do you have some of the worries sometimes expressed by international affairs historians about the effect of the Long Peace? That’s the idea that when we don’t have fresh memories of disaster and its costs, we start bumbling into it again. On the flip side, which you discuss, is that disaster—after we’ve paid the price—moves us forward: human rights got a significant boost after the Second World War. Is the fact that nothing comparable to the world wars has happened since 1945 actually potentially harmful?

A: Well, I don’t think it’s a problem that nothing has gone seriously wrong. But there can be a problem in inadequate appreciation of history. We must remember the things that did go wrong, and not just the Second World War, although that is the worst thing that ever happened in history, but episodes like the Vietnam War, the Iran-Iraq w\War in the ‘80s, the civil wars that raged all over Africa and Latin America, the crime boom of the 1960s. They are events that the world overcame, and we forget them at our peril—because then we’re apt to think that the things that go right are our birthrights not hard-won accomplishments

Q: You do recognize, as you note the Enlightenment itself did, the other strands of human nature, our irrationality, tribalism, deference to authority et al. How do you counter them?

A: They are modifiable. They are currents in human nature but only currents, not determinants. There are also parts of human nature that mitigate their effect. We have the capacity for empathy, for self-control, for cognitive processes that allow us to share our discoveries and accomplishments. Many features of human nature come with various knobs and sliders that adjust them to circumstances. Our tribalism can be expressed as a desire that our nation conquer as much territory as possible, or as loyalty to a sports team, pride in your city or country. So we shouldn’t imagine we could ever engineer it out of us altogether, but just make sure that it gets expressed in socially beneficial ways.