Peyton Manning remains undecided on his future after his Broncos win the Vince Lombardi Trophy, 24-10 over the Carolina Panthers

By The Associated Press February 8, 2016 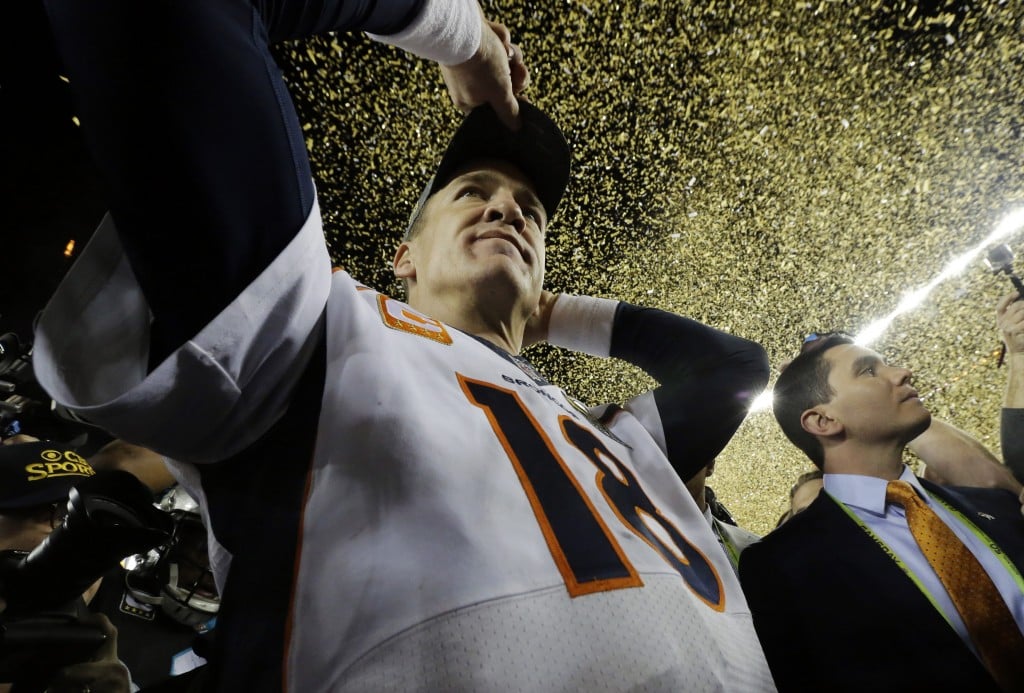 SANTA CLARA, Calif. — A reborn Orange Crush might have sent Peyton Manning into retirement with a Super ending to his career.

Von Miller and the impenetrable Denver defence harassed Panthers quarterback Cam Newton all game Sunday, and the Broncos made enough big plays for a 24-10 victory, Manning’s 200th and perhaps his last before retirement.

He wasn’t the star of Super Bowl 50 — game MVP Miller seemingly was everywhere on every Carolina play — but Manning really hasn’t been the headliner in this injury-shortened season.

“This game was much like this season has been, testing our toughness, our resiliency, our unselfishness,” he said. “It’s only fitting that it turned out that way.”

Emulating his Broncos boss, John Elway, the 39-year-old Manning can ride off with the Lombardi Trophy after leading Denver to its third NFL title, first since 1999 — when Elway was the quarterback.

“I’ll take some time to reflect,” Manning said when asked if this is the end. “I got a couple priorities first. I’m going to go kiss my wife and my kids. … I’m going to drink a lot of Budweiser tonight.”

Denver’s suffocating defence kept Newton jittery all day. Despite wearing gold shoes before the golden Super Bowl, Newton couldn’t finish off a dynamic season in which he was the league’s MVP. Miller twice stripped him, once for a touchdown, the second time setting up a clinching TD. Denver’s top-ranked defence, the one that ran roughshod over Tom Brady in the AFC championship, simply wouldn’t let Newton get comfortable.

“There was a certain point where it was like guys on the sideline were saying, ‘Cam is very stressed,'” Broncos cornerback Bradley Roby said. “For two weeks straight that’s all we heard was Cam this, Cam that, dab this, dab that. They were dabbing in their team photos. It was very disrespectful. We wanted to come out and prove that we’re the best.”

Newton was sacked six times — receiver Ted Ginn Jr., went down once on an aborted trick play — and if Miller wasn’t torturing him, DeMarcus Ware was. Ware had two of the seven sacks, equaling the most by one team in the Super Bowl.

Carolina led the league with 500 points but was held to its fewest of the year, and Denver set an ignominious mark with 194 yards gained, the fewest for a Super Bowl winner.

So what: The Broncos (15-4) are champions and Manning is the first quarterback to win Super Bowls with two franchises, Indianapolis in 2007 was the other. Gary Kubiak is the first to win a Super Bowl as player and coach for the same team.

Manning finished 13 for 23 for 141 yards against a strong Carolina (17-2) defence that just couldn’t match Miller and company.

“I feel very, very grateful,” Manning said. … “Obviously, it’s very special to cap it off with a Super Bowl championship.”

Denver’s defence stole Carolina’s act. The Panthers led the league with 39 takeaways and were a plus-20 in turnovers. On the Super Bowl stage, though, Assistant Coach of the Year Wade Phillips got his first ring because his unit was impenetrable.

It was a far cry from two years ago, when the Broncos were routed by Seattle 43-8.

“It feels great,” said Miller, who had six tackles, 2 1-2 sacks, two hurries, the two forced fumbles and a pass defenced. “Peyton and DeMarcus and coach Phillips and all the guys that have been deserving their whole, whole career. I did this for them. I put my neck on the line for those guys.”

Manning opened the game with an 18-yard completion to Owen Daniels, later hit Andre Caldwell for 22, and C.J. Anderson had a 13-yard run before Brandon McManus kicked a 34-yard field goal.

Carolina’s Ron Rivera, the Coach of the Year, soon after lost a challenge on a pass to Jerricho Cotchery , and it was a key decision. Two plays later, Miller burst through and didn’t even go for the sack. He reached directly for the ball, stripping it from Newton. It rolled to the goal line, where Malik Jackson pounced on it for a 10-0 lead.

Miller dabbed in the end zone in front of legions of orange-clad Broncos fans after Denver’s first defensive touchdown in a Super Bowl.

The only time Newton produced came on a 73-yard drive to make it 10-7. Jonathan Stewart, back from hurting his right foot earlier, dived in from the 1.

Sloppiness — and strong defence — marked the rest of the game.

The first half ended 13-7 after McManus made a 33-yarder that followed the longest punt return in Super Bowl history. Brad Nortman’s kick from his 12 was barely deflected, and the ball fluttered to Jordan Norwood. One Panther bumped Norwood, who didn’t call for a fair catch. Escorted by a bevy of blockers, he appeared headed for a touchdown until DE Mario Addison chased him down at the Carolina 14, a 61-yard jaunt.

But the Broncos also had a giveaway when Manning was picked by DE Kony Ealy on a zone blitz deep in Panthers territory.

Carolina’s Graham Gano hit the right upright on a 44-yard field goal attempt to open the second half. Then his counterpart, McManus, made his 10th in as many post-season tries for a 16-7 margin. The kicker was rescuing Denver’s inept short-yardage offence, just as he did in a playoff win over Pittsburgh when he made five field goals.

Who else but Miller stripped Newton and T.J. Ward recovered at the Carolina 4. Anderson scored from the 2 following a third-down holding call on All-Pro CB Josh Norman. A 2-point conversion was simply window dressing.

“We dropped balls,” said Newton, slouched in a chair with little interest in explaining the outcome. “We turned the ball over. We gave up sacks. We threw errant passes. That’s it.”